Truffaut, Inside Llewyn Davis and the Singing Sweethearts' swansong - Reviews #224 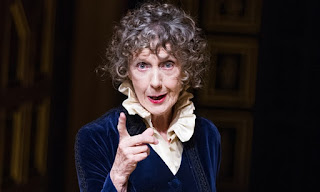 Greetings from my desk, as I upload this blog before going to the staff quiz night. Sometimes it's good to turn off the TV and be sociable. Apparently. Yes, hello.

Last night I saw Eileen Atkins doing her Ellen Terry show, which was wonderful, despite my tummy ache.

As well as mining my brain for a piece on the history of Westerns, I'm currently exploring the lesser-known movies of Francois Truffaut, one of my favourite filmmakers. I have seven remaining. The first three were... a little underwhelming. 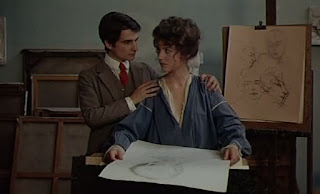 Anne and Muriel (1971) - Truffaut’s second adaptation of a Henri-Pierre Roché novel is even worse than the mystifyingly lauded Jules et Jim, with the director essentially just reading out the book to provide exposition and motivation, as his cast acts out a succession of short scenes. In the lead, his frequent alter-ego, Jean-Pierre Léaud, is limp and bland as the young Frenchman espousing free love whilst romancing two English girls, the spirited, progressive Anne (Kika Markham) and her sister: taciturn, haunted, ginger Muriel (Stacey Tendeter).

The title characters – and the actresses playing them – are sufficiently distinctive to stick with you after the credits roll, and Néstor Almendros’s cinematography is absolutely gorgeous, but this is no way to adapt a novel, and an object, abject lesson in why filmmakers shouldn’t direct scenes in their second language: Mark Peterson’s line readings as Mr Flint are absolutely atrocious. There’s a reason why he only ever made one other film, and it was called Terror in the Swamp. Philippe Léotard, who was such a disaster in Truffaut's next film (see below), is unexpectedly good here, in a barely written role.

All in all, it just seems an odd project for Truffaut to choose and one upon which he never quite gets a handle. I would advise that you watch Polanski’s not dissimilar Tess, but unfortunately he’s a convicted paedophile who refuses to serve his sentence, so I won’t. (2) 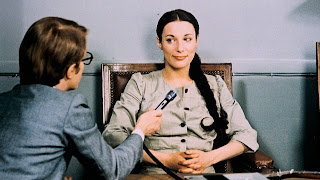 A Gorgeous Girl Like Me (1972) - A sociologist (Andre Dussollier) interviews a criminal (Bernadette Lafont) about her past conquests and falls under the same spell as the other men, in this little-known Truffaut movie, which is brilliantly filmed but sadly wastes its promising premise with a narrative - and performances - that unfortunately recall the Confessions series, that '70s sex-comedy nadir of British cinema.

The caricatured, charmless performances and flashes of flesh are about as arousing as TB and for all the gushing reviews eulogising the film's "jet black comedy", it's simply a one-joke affair, the one joke being that Dussollier sees Lafont as a victim, rather than a calculating nymphomaniac.

But what sounds on paper like the set-up for a dazzling psychodrama or subversive satire doesn't even have the precision of character to work on its own terms. Despite that, the tracking shots, elegant zooms and explicit nods to past works do at least remind you - however fleetingly - of the movies which assured Truffaut's reputation as one of the greatest filmmakers who ever lived, while the "Mr Farrell" sequence and the offbeat final shot call to mind my own very personal relationship with his work. (1.5) 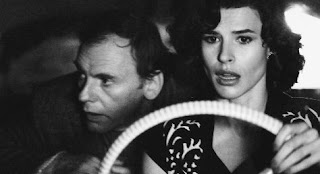 Finally, Sunday! (1983) - Truffaut’s swansong is a gentle (though not particularly funny) comedy-murder mystery, with Jean-Louis Trintignant playing a real estate broker suspected of murder, and Fanny Ardant as the stoic, lovelorn secretary seeking to clear his name (shades of Mark Stevens and Lucille Ball in The Dark Corner).

The movie rarely evokes the Old Hollywood tone for which it strives, but Ardant is charming and truly touching, Nelson Almendros’s monochrome cinematography shimmers and beguiles, and the movie’s rather shapeless, unsatisfying narrative does end up somewhere both philosophically interesting and reasonably tense.

The whimsical final image, shot through with Truffaut's familiar love of children, is just about the perfect sign-off for this giant of cinema, unwitting though it was. (2.5)

Inside Llewyn Davis (Joel Coen, 2013) - I have an uneasy relationship with the Coen Bros. I watch most of their films and like many of them, but I also find them frustrating and difficult to love, their movies aloof, smugly self-involved and with a fatal lack of heart, along with a fondness for perverse, self-satisfied twists that take you on the road less travelled to nowhere in particular.

This, though, is my favourite so far.

It took me a while to get around to it (for those reasons I just mentioned), but the lure of the leads and the attraction of the Village milieu that has tantalised me since I was a kid finally got me there. Sometimes its self-conscious oddness (hello John Goodman) and wilful, spiteful unsentimentality (hello a man shitting himself to spoil a potentially moving sequence about dementia) grates, but for the most part this sad, whimsical and purposefully baggy story of missed opportunities and shambling urban alienation is an extraordinarily special piece of work, and one which avoids cliché not because it thinks it’s clever to do so, but because this is how things would be, how the characters would behave.

So Oscar Isaac’s titular folk-singer – shuffling around Greenwich Village in the desperate calm before the coming folk boom – doesn’t visit his young son (because he can’t face it); can’t channel his anger into his music when faced with genuine social ills (whereas Dylan wrote When the Ship Comes In after a receptionist was rude to him at a hotel); and fails his audition for a kingmaker agent through no real fault of his own, certainly no disaster. It simply happens – the try-out doesn’t quite work, perhaps a matter of taste. Nor, indeed, does Llewyn’s dubious novelty record explode in some echo of O Brother Where Art Thou? It doesn’t even come out during the film.

Isaac and Carey Mulligan (as his sometime girlfriend) are both utterly superb – the former better than I have ever seen him – and the music, the cinematography, the explosions of regret and rage are note-perfect. I found the film as a whole unusually and arrestingly affecting. And the cats are wonderful too. Perhaps my relationship with the Coens could yet blossom - this could be the beginning of a beautiful friendship. (3.5)

I Married an Angel (W. S. Van Dyke, 1942) - On the one hand, it’s nice that this Nelson Eddy and Jeanette MacDonald musical tries something new, but, on the other, it’s an almost complete disaster. The pair made their name as the ‘Singing Sweethearts’ with formulaic but wonderfully, peerlessly escapist period movies like Naughty Marietta, Rose Marie and Maytime, in which their characters fell in love and sang together, while one, the other or both were pursued by villainous forces (including, memorably, Maytime’s John Barrymore). Only one of the six movies they made with that template – a bastardised version of Noel Coward’s Bitter Sweet – failed to work the requisite magic.

This, their last film – and the second to deviate from the tried-and-tested formula, following 1938’s Sweethearts – goes off the deep end with a flamboyantly original storyline that is sadly also completely incoherent, and consists principally of one long, bafflingly misguided dream sequence. Eddy plays a carousing banker oblivious to the unrequited love – and indeed the existence – of his patient, doting secretary (MacDonald). After getting hammered at his fancy dress party, to which she’s come badly dressed as an angel, he falls asleep and dreams of a genuine celestial being (again MacDonald) who comes down to Earth to marry him, only for her innocence to prove their undoing. Sort of. It’s not very well conceived.

Neither performer is at their best here, with Eddy in particular merely going through the motions, devoid of his usual energy and vigour, while the ambitious narrative flits from one half-baked scenario to another, arbitrarily crowbarring in the disparate numbers. Despite said that, there are some minor pleasures: a handful of excellent Rodgers & Hart songs, the imaginative rendering of both the angel’s arrival and the I’ll Tell the Man in the Street number, and MacDonald vamping it up as a fallen angel: in her somewhat naff, slightly embarrassing and dated way, I’ve always found MacDonald weirdly sexy (especially in black and white), so that sequence was particularly… involving.

Sadly none of those compensations come close to rescuing this unworthy swansong for one of cinema’s most charming couples, a film so poorly devised that even Edward Everett Horton isn't good in it. (1.5)

Thanks for reading.
Posted by Rick Burin at 17:27