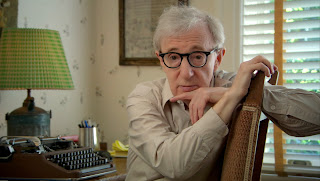 First things first, as it's all over the papers. I don't know the truth about Dylan Farrow's allegations against Woody Allen. I'm a huge fan of Allen as an artist, and would hate for these things to have been happened (I haven't been able to watch a Polanski film in years), but the crucial thing is that the truth be established. This typically superb Onion piece says something about the quandary facing fans, as trivial as this is in the context of the allegations.

It seems an odd time to watch an Allen doc, then, but it arrived in the post recently, I had a spare three hours, and this insightful, incredibly entertaining film is chiefly about Allen's work, rather than his life. And rather wonderful it is too, if you can put the headlines briefly out of your mind, full of intimate interviews and rare footage, even if it becomes a little shapeless towards the end, and seems to think Match Point is a great film. The clips from that and Vicky Cristina - along with on-set footage from You Will Meet a Tall Dark Stranger - do illustrate just what a creative slump he was in prior to Midnight in Paris. The doc scores a (3.5).

1. Allen (born Alan Konigsberg) chose a nom de plume because he didn't want people at school asking him about his gag-writing for newspaper columnists, and picked "Woody" because it was the first thing that came into his head.

2. As a nipper, he was too active and "too much of a child" for his mum. She later regretted being so strict, saying he would otherwise have been a softer, warmer and less impatient person.

3. He regards his first four or five films as funny but "essentially trivial".

4. What does he see as his legacy? If his life had been snuffed out by a nanny at an early age, as it almost was, the world "would be poorer a number of great one-liners".

5. Production nuggets: cinematographer supreme, Gordon Willis, was known as "The Prince of Darkness" due to his grouchy disposition and fondness for low-level lighting (as showcased in The Godfather). The first scene he ever filmed for Allen was the celebrated lobsters sequence in Annie Hall. He shot Manhattan in super-widescreen (2.35:1) because Allen thought it would be interesting to make a small romance on that visual scale. Woody was never as specific as to tell him to shoot Stardust Memories in a Fellini-esque way. Casting director Juliet Taylor kept a folder of "Woody faces": eccentric-looking character actors she thought he could use.

6. Allen decides his next project by emptying a draw full of scribbled ideas onto his bed and going through them one by one, waiting for inspiration to strike. One says: "a man inherits all the magic tricks of a great magician".

7. Purple Rose originally had Michael Keaton in the Jeff Daniels part, but Allen thought him too contemporary.

8. He sends a personalised but formulaic covering letter to every actor along with the script, essentially saying they can embellish it and chuck out the speeches they hate, and if they find the prospect of working on this one nauseating/disgusting/grim, he still hopes they can work together in this lifetime. He only seems to have signed off the one to Scarlett Johansson with "I'm a big fan."

9. He claims Hannah is a bleak film that audiences thought was optimistic due to his incompetence (I think this might be a fib if you look at the final scene, which he admittedly added belatedly).

10. Farrow confronted Allen about his pictures of Soon-Yi Previn over the phone, whilst Allen was with producer Robert Greenhut. Which must have been quite tricky for everyone involved.

It's highly recommended for committed Allen fans, though I'd caution against others getting a copy, because if you hate him you'll hate this, and if you're still investigating his work there are a lot of spoilers. I'll leave you with this beaut from one of the stand-up clips:

"I had a rough marriage. Well, my wife was an immature woman and, ah, that's all I can say, she... see if this is not immature to you: I would be home in the bathroom, taking a bath, and my wife would walk right in, whenever she felt like, and sink my boats."

See also: The first in my "Ten things I learned..." series was on Michael Winterbottom.
Posted by Rick Burin at 20:40