Laughton, the Lanes, and Woody does Lang - Reviews #185

The latest reviews update, in which I watch a couple of good things and then nearly drown in dreck. 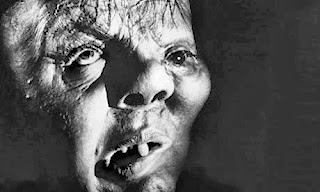 The Hunchback of Notre Dame (William Dieterle, 1939) - "Everybody thought he was a genius," Rex Harrison once said of Charles Laughton. "I didn't. I thought he was more of a show-off, really."

This spellbinding film, from Hollywood's greatest year, is the most forceful rebuke to Sexy Rexy's silly, green-eyed contention you're ever likely to find, offering considerable evidence as to why Harrison found himself in a minority of one.

The mighty Laughton is Victor Hugo's tragic hero, Quasimodo, the deaf, childlike bell-ringer of Notre Dame Cathedral, whose passions are awakened by the arrival of the beautiful gypsy girl, Esmeralda (Maureen O'Hara), in Paris to seek clemency for her people from the King. His head isn't the only one that's turned, though, as she unwittingly attracts the attention of three other men: a poet (Edmond O'Brien), a soldier (Alan Marshal) and a sexually repressed clergyman who believes she's been sent to drag him to Hell (Cedric Hardwicke, in delicious form). Cue potential tragedy, and enter Quasimodo.

Filmed on an enormous, astonishingly detailed set, Dieterle's film evokes an almost unparalleled atmosphere, presenting 15th-century Paris as a place of social oppression, fervent spirituality and crippling superstition, its streets teeming with life, violence and hatred, the whole city at a turning point in its history. At the centre of this maelstrom, as the printing press spreads dissent and the ruling class spread discord, is a true innocent, brought to stunning life by Laughton in a remarkably restrained, nuanced and enduringly affecting performance. He's sparingly used until the film's final third, but it's his presence that dominates throughout, as he wins our pity, our sympathy and then our affection, while essentially allowed to act with just half his face, the remainder covered in remarkable prosthetics.

There are stunning passages studded throughout the film, like the Fools' Day parade and the trial of Esmeralda (which ends with the indelible line: "... together with your accomplice, the goat"), but towering above all is the unforgettable "Sanctuary! Sanctuary!" set-piece, which remains simply one of the greatest, most spine-tingling sequences ever put on film. And who else but Laughton could have pulled it off? Probably not Rex Harrison. (3.5)

This review was written for MovieMail. 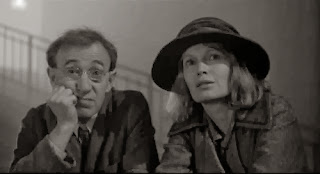 WOODFEST '14: Shadows and Fog (Woody Allen, 1991) - Woody Allen's homage to Expressionism - particularly Kafka and Fritz Lang's M - never quite gels, but it's unusual and amusing all the same.

Allen is in full Bob Hope mode as a nervous nebbish sent out by his vigilante mob to trap a strangler in the shadow-shrouded nocturnal streets. Unfortunately no-one's shared the actual plan with him, and so he just wanders around, incorporating a gallery of grotesques and lost souls, including a circus sword swallower (Mia Farrow) who dreams of a family but has ended up at a whorehouse.

Blending ruminations on mortality and a strange subplot about anti-semitism in a Third Reich-like state with absurdism and Woodyish one-liners could conceivably have worked, but here the elements just sort of sit alongside one another, rather than congealing into a satisfying whole.

It looks fantastic, though, with Carlo DiPalma's cinematography ladling on plenty of the eponymous elements, and while there are some scenes that don't work - largely those featuring the killer - there are also some great ones, in which Farrow explores her desires or Allen tries to comprehend the spiralling situation. Watching him weasel up to his boss, try to satisfy warring vigilante factions and childishly gloat at the murderer via a magic mirror is an absolute delight.

The film also has one of the director's most peculiar and eclectic ensembles, with the excellent Farrow sharing a love triangle with Malkovich and Madonna, while Jodie Foster and Lily Tomlin play prostitutes, John Cusack is one of their clients, a young John C. Reilly turns up as a cop, and Donald Pleasance appears as a very creepy doctor.

After a devastating purple patch between 1984 and '89, Allen dipped a little on Alice and this one, before roaring back with Husbands and Wives, as his life and reputation fell to pieces. (3) 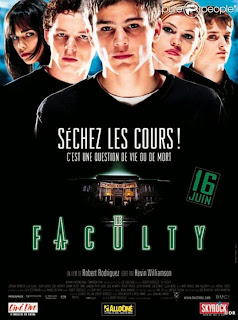 "You can be such a -"
"What?"
"Pretty cool human being when you're not being a first class, Grade A bitch."
The Faculty (Robert Rodriguez, 1998) - Pod people take over an archetypal American high school in this typically sharp comedy-horror from the pen of Kevin Williamson.

That smart set-up allows for some astute commentary on the potential benefits of blank-minded assimilation, as well as Williamson's usual amusing inventions - it seems aliens can be killed by chucking drugs at them - and superior dialogue, laced with post-modern genre references, a few overt, a few not.

It isn't as consistently great as it might be, with some dodgy CGI, wish-fulfilment for geeks and nonsensical plotting, but there's lots to enjoy, with a steady stream of shocks and surprises, and a cracking cast.

Bebe Neuwirth is particularly fun as the headteacher, and there are turns from budding stars Elijah Wood and Josh Hartnett, supported by a gallery of familiar faces (Robert Patrick, Famke Janssen, Salma Hayek, Piper Laurie and Jon Stewart) playing the faculty. There's also Harry Knowles, which I suppose is one way of ensuring your film gets a good write-up.

Perhaps ironically, given Williamson's considerable flair, my favourite scene is entirely wordless, an apparent homage to The Birds in which our band of misfits stride out of the school building in slow-motion, observed by a mass of gormless alien fizzogs. Rodriguez has proved a wildly unreliable filmmaker, but he handles this one quite nicely, and that sequence is both obscenely exciting and hysterically hip. (3) 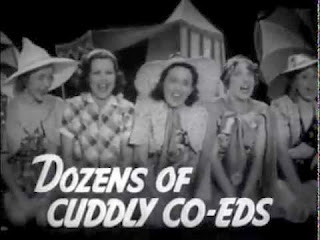 This is the best pitch ever for a film.

Varsity Show (William Keighley, 1937) - A pleasant but completely nondescript "campus musical" - back from when that was a thing - right up until a big, bold Busby Berkeley finale.

The script, cast and numbers are bland as can be, until Buzz intervenes in typically bombastic fashion. First John Bubbles does a flamboyant tap routine in front of some giant sheet music, then it's twirling batons galore and synchronised hoofing, before Berkeley takes to flinging pigskins at 3D flags of various US colleges, each one created by a hundred or so dancers, as the soundtrack hollers their anthems. Not his best by a long shot, but middling Berkeley is still something to behold.

Apparently some 40 minutes of the film were snipped by Warner for its re-release, and no longer exist. On the strength of what remains, we didn't lose another Ambersons, though a couple of numbers in the trailer look better than most of those that remain. (2) 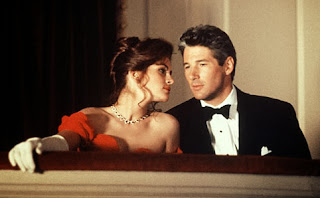 Pretty Woman (Garry Marshall, 1990) - This has been a recruitment video on behalf of the prostitution industry. (2) 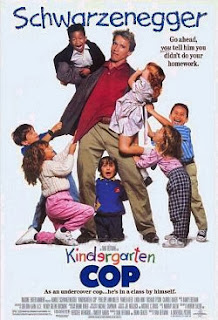 Kindergarten Cop (Ivan Reitman, 1990) - Oh early-1990s, you guys crack me up. And with this high-concept action-comedy you must have created about the highest and most lowbrow concept ever: Arnie, playgroup, let's go!

Beyond the premise, it's just screenwriting by numbers, with every development signposted in advance, and every tick-box checked, from mawkish motivation to the requisite action climax. And in the foreground are a bunch of kids who can't act, but in the presence of Arnie "doing comedy" look like a RADA reunion. Then there are those parts, erm, "borrowed" from crime classics White Heat and The Narrow Margin, and what seems like five solid minutes of a car repeatedly pulling over so someone can be sick.

The best you can say for the film is that Penelope Ann Miller is quite good as the love interest, it has undisputably the greatest title card of all time, and there's a sign outside a shop saying "Owl drugs", which I hope is what it sells, rather than its name.

I'd always remembered this as being fun. But it's not fun. How could a film called Kindergarten Cop not be fun? (1.5)

... and an early contender for this year's This Film Is the Worst award: 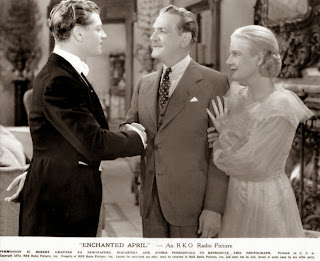 Enchanted April (Harry Beaumont, 1935) - Yikes. I'm not a very cynical person, but this artificial, unconvincing drama is a bit twee, even for me. It's also quite outrageously uninteresting. "I don't know why San Salvatore makes me so drowsy," ponders one of the characters. Me neither, but the feeling's mutual. I could sense myself growing increasingly jaundiced, grumpy and ever so sleepy under the film's malignly benign influence.

Ann Harding and Katharine Alexander are the unhappy American housewives given a new lease of life by their stay at an Italian villa. The script is profoundly irritating - mixing weak comedy, self-pitying drama and inexplicable subplots - and the film completely fails to evoke Italy through a mixture of second-unit footage and back projection.

Harding was a really good actress, but she's unbearably bright-eyed and unfunny here, aside from in the climactic scene. She and screen husband Frank Morgan fared much better in the excellent 1933 film. When Ladies Meet. In support, Reginald Owen tackles the material with all the subtlety of a knee to the face, as we head towards one of the worst endings I've ever seen.

Apparently the 1991 version is rather wonderful. I'll have to watch it, after I've destroyed all copies of this one. (1)

Thanks for reading.
Posted by Rick Burin at 18:07