Me and Shirley Temple 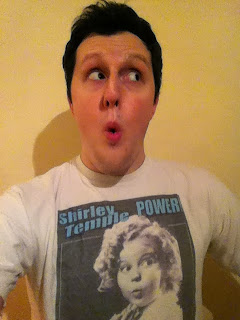 Stop all the clocks. Turn off the projectors. Dismantle the Hollywood sign. Old movies are dead.

That's how I feel about the passing of Shirley Temple, the curly-topped little moppet who had an incalculable impact on 20th century popular culture, and as big effect on my own existence as just about anyone else I never met. As a 29-year-old, 21st-century Englishman who didn't go near an old movie until I was a teenager, I'm about as far away from Shirley's target audience of Depression-era Americans as it's possible to get. And yet I loved her.

Of course I'm fascinated by her place in cinematic folklore and 20th-century history as a whole. I'm intrigued by the way she effectively defined the persona of the child star, breaking box-office records as she went. And I'm impressed by the way she graduated from a child star to an adult, giving stellar turns for Selznick and Ford, before deciding that her dreams lay in disappointing me by becoming a Republican.

But in the end none of those things really matter. Not the politics, the records, nor her place in popular culture. Rather, I just love what she brought to the screen. I love her films, and the megawatt charisma, unbounded talent and irrepressible joy with which she imbued them. Her vehicles were formulaic in the extreme - studio Fox would always leave her with one screen parent at most, usually a dad, so adult audiences would instinctively want to mother her - and yet there isn't one that I wouldn't happily sit down to watch this minute. That has little to do with Allan Dwan's sense of visual composition or fondness for a weird fantasy sequence about clogs (Heidi), the often epic production numbers (Poor Little Rich Girl) or even the sight of Guy Kibbee dressed as a baby (Captain January), though that is great. Instead, the reason stands about three feet tall, and has 56 meticulous curls atop its chubby round face.

I first heard of Shirley Temple when I was 10 and a tuneful classmate sang the actress's signature song, On the Good Ship Lollipop, in school assembly. As you might remember, I was one of those doing the actions in the background. I've always been fascinated by history, and this blast from the past interested me no end. I decided to find out more. Then I forgot. It took my immersion in old movies at the age of 13 to really set the wheels in motion. From then on in, I frittered away my paper round money on Shirley-branded DVDs in pink cases, as if they had once been in fashion and were now going out of fashion. Some of my interest was doubtless ironic teenage posturing, but most was a fascination with Shirley's unique iconography - the way her image was marketed, enjoyed and consumed, coming to represent an entire era of American history - coupled with the fact that her best movies stood comparison with just about anything made during that period, and that she was unfailingly extraordinary in them.

In simplest terms, she was a superb actress with incredible screen presence, who could play an emotional scene as deftly as anyone, keep up with the hoofing of the incomparable Bill "Bojangles" Robinson (admittedly in his later years), and present distinctive, definitive versions of standards both sappy and sublime. She effectively created a cottage industry of Shirley Temple Films and while, yes, the weight of the studio system was behind her, it was her natural talent and force of personality that sustained it through good movies and bad. Her persona of the indefatigable child, confronting tragedy with a smile and quite often some sort of a song, could - indeed would - have been cloying or wearisome in the hands of almost any other young performer. Instead, she attained an essential, simple truth in her acting, while positively commanding your attention. She was a child actor for whom you had to make no excuses, only apologies to the veterans she was tramping under her feet. Across five years of star vehicles - some 15 films in total - she proceeded to refine, even re-define the idea of the child actor, becoming the infant star by which all others would be judged, as she delivered again and again and again. 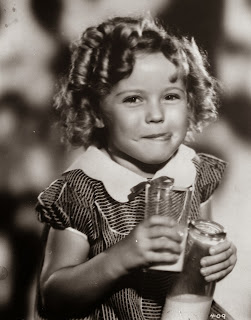 If we play the fun game of reducing her movies to pocket summaries of her characters, then a few of my favourites would have to be Imperial Shirley (Wee Willie Winkie), Civil War Shirley (The Littlest Rebel) and Chinese-speaking Shirley (Stowaway), though it seems a shame to miss out such delights as Splashy Shirley (Just Around the Corner), Lollipop Shirley (Bright Eyes) and indeed Breakout Shirley (Little Miss Marker), the one in which she laid waste to a gallery of usual scene-stealers and embarked on the path to superstardom way back in 1934. Imperial Shirley was in fact a movie made especially for me, being based on a story by my favourite poetic imperial tubthumper (Rudyard Kipling), starring my favourite heavy-set British character actor (Victor McLaglen) and directed by my favourite filmmaker of all time, the mighty John Ford. Incidentally, because doubtless everyone will bring it up today, Graham Greene did indeed accuse Fox of "pimping" their young star, in his review for the film (for their part, they slapped him with an enormous lawsuit), claiming her characters were weirdly sexualised. As satire, it was kind of funny, but as a proper critique of her presentation, it doesn't stack up. Her characters bantered with male adults, and wrapped them round her finger, but always in the service of a story that required her to do so in order to avert some tragedy for herself or others. And while her skirts were indeed shorter than most other child stars', that was more to accentuate her dancing, ultimately becoming part of her image.

From 1939, Fox let Shirley grow up. Slowly. She got her first kiss in 1942's Miss Annie Rooney, gave a stunning, beautifully modulated performance in the irresistible Home Front drama, Since You Went Away, then kept pace with two of the greatest ever light comedians - Myrna Loy and Cary Grant - in The Bachelor and the Bobby-Soxer. A year later she reunited with Ford for Fort Apache, the first part of his legendary Cavalry Trilogy, where she and the greatest of all American directors reconvened their mutual appreciation society to unforgettable effect.

Some of those films I've seen lately, some not for years, but all have stuck with me in one way or another: sometimes just an image, a line or a song, but always Shirley, never her more decorated co-stars, which I think is the mark of a great actor - certainly a great star. And, aside from the days lost lazing on the sofa, watching old Shirley films (20 at last count, many numerous times), my life has been peppered with happy Temple-related memories.

I watched half of Stowaway with my future best man prior to going clubbing in sixth-form. (Stowaway, of course, has one of Shirley's best performances, a gaggle of great numbers and that "macaroni" joke.). I devoured '30s newsreels on a public domain site with my younger brother ("Oh thank you very much, Mr Cobb", from her birthday celebrations, became our shared catchphrase) before we watched Just Around the Corner together. And then I made that t-shirt online and wore it to death, until my dad said it was weird. After I met my future wife, one of our first days together was spent watching The Littlest Rebel. That's the one with Pollywollydoodle, which was my answerphone message at university. I used to use "Curly Top" in bios or as an online title, and Shirley as a profile pic, until I got that serious haircut a couple of years back. Indeed, when I applied to Empire Magazine's Thunderdome competition in 2006 - which was searching for amateur writers - I described myself as combining "the hair of a young Shirley Temple with the easy-going affability of a young Dennis Hopper". I didn't win. I also wrote to Shirley, expressing my admiration. I never heard back. Then I tweeted her, when she turned up on everyone's favourite micro-blogging site, and she didn't reply then either. But then she had a million fans, so I didn't hold it against her. MUCH.

In a way, for those of us who don't know Shirley, it doesn't matter whether or not she's still around. I never met her, I never would have.

And yet, as her light goes out, as she goes to win round the grouchy old grandad in the sky, it feels that a link to our shared heritage has been severed, that those flickering silver images are a little further away, their faces and voices a little fainter.
Posted by Rick Burin at 20:14