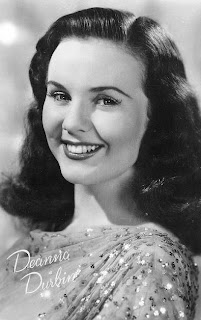 Deanna Durbin, who has passed away aged 91, was a performer of almost supernatural talents.

Not just the voice - that voice - as beautiful an instrument as the movies have ever heard, but the dramatic chops that meant Renoir was desperate to work with her (and which led to some of the loveliest moments of the Golden Age), and that ever-underrated comic ability, incorporating a singular, faux-grown-up "lovestruck" mode, rolled out at regular intervals ("I know, David"), that remains one of the great joys of cinema.

Not all of her pictures were great - she thought the last four so poor that she quit movies and went to live in France - but she was an unfailingly magnificent screen presence, and, when the scripts were worthy of her gifts, the results were just spectacular. 100 Men and a Girl was Churchill's favourite movie (he used to watch it as a treat after major military victories) and the success of that and her other starring vehicles saved Universal studios. Without Durbin, no Destry Rides Again, Jaws, E.T., Back to the Future or Happy Gilmore (sorry about the last one).

Deanna had only pitched up at Universal after being snubbed by MGM. She'd appeared in a two-reeler with Judy Garland, intended as a glorified screen test. MGM could only take on one of them. "Get rid of the fat one," said studio head Louis B Mayer. They got rid of Durbin. He meant Garland. Nice guy.

Her mentor, Joe Pasternak, famously passed up any credit for spotting her talent, declaring: "Deanna's genius had to be unfolded, but it was hers and hers alone, always has been, always will be, and no one can take credit for discovering her."

And genius isn't too strong a word for what she had. When she broke into song, the other actors were usually required to just stare slack-jawed in amazement, or burst into tears. It can't have been hard: I'm usually doing the same thing. Not many comedians could elicit so many laughs from such erratic material, and only a handful of actresses could carry a movie on their shoulders like Durbin. But it's the voice - that voice - that deserves the final word. It's technically flawless but it's also wrenchingly powerful, thanks to the abundance of emotion she invests in everything she sings. Her heartbreaking balladeering on songs like Goin' Home and I'll Take You Home Again Kathleen destroys me. Precious few singers have ever moved me so deeply.

Here's a quick primer on one of the greatest talents ever to grace a cinema screen. 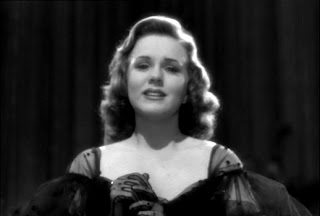 My Own (from That Certain Age)
Ave Maria (from It's a Date)
There'll Always Be an England (from the British print of Nice Girl?, a sort of Easy A for the late '30s)
Goin' Home (from It Started with Eve, opposite the mighty Charles Laughton - sorry about the squashed image)
Nessun Dorma (from His Butler's Sister, which sounds like a made-up '40s movie, but really does exist)
I'll Take You Home Again Kathleen (from For the Love of Mary, an iffy romantic comedy about romantic complications at the White House) 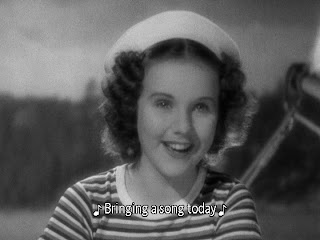 Three Smart Girls (Henry Koster, 1936)
A starmaking vehicle, model romantic-comedy and peerless helping of Depression-era escapism all in one, as Durbin - in her feature debut - appears as bright-eyed 14-year-old, Penny Marshall, who reunites her parents with the help of two older siblings. It's funny, moving and wonderfully uplifting, with great numbers and a notable early role for Ray Milland. Durbin is introduced bellowing My Heart Is Singing at the top of her lungs, as is only right. This box-office smash was followed by two sequels: the first is well-acted but overly glum, the second a bit of a slog.

Mad About Music (Norman Taurog, 1938)
Swiss-set boarding school shenanigans, with film star's daughter Durbin pretending her dad is a holidaying composer (Herbert Marshall). A particular treat for fans of people singing whilst riding around on bicycles, and a sweet, perfectly-formed little film.

That Certain Age (Edward Ludwig, 1938)
Deanna grows up, a little, in this completely charming age-gap rom-com, written by Billy Wilder and Charles Brackett, falling for suave middle-aged man Melvyn Douglas, much to the disgust of her suitor, Jackie Cooper. It includes Durbin's spellbindingly beautiful rendition of My Own, which got a Best Song nom.

Spring Parade (Henry Koster, 1940)
The hardest to find of all Durbin's films - it was missing from the 19-disc DVD retrospective, along with It's a Date - but well worth the effort. Cleverly integrating romance, song and dance, it has a feel all its own, with a rich (Americanised) Viennese atmosphere fashioned on a Hollywood soundstage. Durbin's four songs are all sensational.

The Amazing Mrs Holliday (Bruce Manning, 1943)
This is easily the worst film on the list, but it's also perhaps the most interesting: a WWII drama, originally directed by Jean Renoir, that was bashed into the shape of a weak, family-orientated rom-com after Universal got cold feet over the rushes. Durbin gives a sensitive, beguiling dramatic performance - by far the best of her career - and her reading of Mighty Lak' a Rose is extraordinarily moving.

Lady on a Train (Charles David, 1944)
Back in the game! After a few misfires, Durbin came roaring back, her hair bleached blonde, with this Christmas-set fusion of comedy, whodunit and film noir. She's brilliant, leading man David Bruce is hilarious and there's a stunning supporting cast featuring Edward Everett Horton, Ralph Bellamy, Samuel Hinds, Allen Jenkins and Dan Duryea. The numbers include a lovely reading of Silent Night that's curiously imagined but exquisitely sung, the sultry Give Me a Little Kiss, and Cole Porter's Night and Day, cleverly staged and given a complex, tom tom-led arrangement. She appeared in one other noir, Christmas Holiday, directed by genre legend Robert Siodmak, and co-starring Gene Kelly. That's a muddled, overly melodramatic film, but her fascinating turn just about keeps it afloat.

If you get a chance to see a Durbin picture, don't pass it up. Perhaps the final few weren't so hot, but she was always incredible to watch, and her vocal numbers are unfailingly magnificent. She'll be much missed, but at least she lived a long and happy life, giving it all up to do what she really wanted. (Incidentally, the bit about her last four movies inspiring her retirement was an exaggeration, but there is some truth behind it. See her only post-retirement interview for more.)