Some musings on everyone's favourite Happy Days spin-off, now back for a fourth season, only on your local interweb. 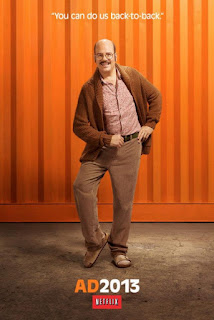 *DON'T EVEN THINK ABOUT READING THIS UNTIL YOU'VE WATCHED IT*
Arrested Development (Season 4, 2013)

You are Mitchell Hurwitz, creator of the most revered American sitcom of its era. Your baby, Arrested Development, may have bowed out ahead of time, but it's constantly held up as a model comedy, endlessly invoked as a classic of its type, and frequently features in lists of the best TV shows of all time. Do you:

a) Leave it
b) Wait seven years - until anticipation is at fever pitch, but you would naturally be forced to account for the gaping gulf in plot terms - circumnavigate your cast's scheduling conflicts by constructing wildly diverging narratives for each and every character, then dump a sprawling eight-hour pseudo-mystery sequel onto the internet, its story a farce of truly epic proportions, packed to bursting with misunderstandings, double-crosses and delirious attempts to pull the rug out from under your audience. And, of course, make the show's original moral centre a desperate, needy loser living in his son's dorm-room. All this, despite the fact that your show traded heavily - and dangerously - on the line: "I've made a huge mistake."

Obviously you do the second. You are Mitchell Hurwitz.

Such is the scope of Arrested Development Season 4 that a plot summary is nigh-on impossible. But here goes: Michael (Jason Bateman) becomes a movie producer at Ron Howard's company, planning to film a movie of his family's life (that this never amounts to anything appears a sly dig at reunion cliches), while his son (associate producer Michael Cera) becomes a man. As Lucille (Jessica Walter) languishes in prison, George and Oscar (Jeffrey Tambor) unwittingly trade personalities - the former's masculinity failing as he tries to build a wall between the US and Mexico - and Lindsay (Portia de Rossi) falls in love with an ostrich-farming militant, as well as having an affair with an adulterous politician (transparently patterned after Herman Cain). Her husband Tobias (David Cross) is accused of being a sex offender, starts dating a heroin addict, and stages a musical of the Fantastic Four. G.O.B. (Will Arnett) becomes a hanger-on to a clean-cut pop star (and thinks he might be gay, after experiencing friendship for the first time), Buster (Tony Hale) rejoins the army, and Maeby (Alia Shawkat) amounts to nothing. Steve Holt! (Justin Grant Wade) works in pest control.

These stories are split into 15 episodes of between 28 and 37 minutes, each told from a single character's point of view, but with others strolling in and out. Though the stories wander as far as India, they're steeped in a familiar claustrophobia, reinforced by the fact that the characters share plane journeys, tents and partners, without their knowledge - a comic fall-back that Roger Ebert speared so memorably in his review of Big Business. The time-shifting narrative sees us begin each episode at some crucial juncture, before flashing back. And the whole thing is meticulously constructed, its plotting so labyrinthine it makes Pulp Fiction look like Ice Age: throwaway lines take on significance hours later, garbled phone calls only begin to make sense in retrospect, and the truth behind various mysterious encounters (like the spirit of an ostrich appearing to George and Oscar) is ultimately revealed.

That wasn't really what Arrested Development was about, was it? No it wasn't. As well as brutish unsentimentality and stinging satire, it was more about jokes. It crammed in a lot of plot (courtesy of Ron Howard's fast-paced voiceover), but that was a way to get us to the funny stuff. And really we could have done with more of it here, particularly in the early part of the run. Episodes two and three are almost entirely bereft of laughs, and were presumably the point at which fans took to social media, saying: "This is shit." It gets a whole lot better, and there are some stunningly brilliant gags in Season 4 - the pay-off to G.O.B.'s first episode may be my favourite thing that the show has ever done - but I still found I was only laughing two or three times during some of these super-sized helpings, and that isn't really enough. Nodding in appreciation of a clever plot development doesn't really plug that gap. That's what she said.

There's another problem too. I'd class myself as a fan of Arrested Development, but I have always had a problem with its more unpleasant elements. I can stomach, if not really enjoy, Lucille's malevolent misanthropy, as it's central to the show's identity. What I don't like is the way that the programme mines humour from the supposed grotesquery of people with problems. The subplot with Tobias being suspected of being a sex offender is hilarious (despite the notably appalling undercurrent), because it's set up with such panache and finesse, all leading to a perfect confrontation at the model home. The subplot about his girlfriend - a heroin user - is, by contrast, just gratuitously nasty: there's nothing sharp, insightful or intelligent about it, it simply involves laughing at the degradation of drug addicts' bodies. Even in the unlikely event that you can find something funny about a heroin addict's teeth falling out, I think there's an argument that a show like this should pick its targets, not just because of its privileged position, but because it smacks of incredible laziness. Though it aims some barbs at Christianity (at least a strong target, if a familiar one), Arrested Development makes just one concession to the politically-charged subversion that characterised much of its earlier work: Buster's apt new job, which is devastatingly satirical in a way that the show seemed to have forgotten how to be. Elsewhere, it's just happy to take a funny, fairly timely punchline - let's make The Social Network starring George Michael Bluth, but he doesn't have any software except half a woodblock app, and his hangers-on are all sex offenders - and works out how to make it so.

So, swelling with ambition but a little light on jokes and with a mid-section that's simply too mean-spirited, how does it work as a whole? Actually pretty well. There's little to touch its Season 2 high-spots, but nor is there anything worse than the Charlize Theron sub-plot of Season 3, the second-half of Hand to God (i.e. everything that follows that majestic Gloria Grahame gag) or the Ed-Begley-Jr-has-alopecia running joke that bored everyone to tears. There are some excellent episodes here, and I for one found the block-viewing rewarding, the series gaining momentum - and confidence - as it progresses. At first it feels like we're treading water: the characters are the same, but they're not, and too many of the early episodes trade on our well of affection for the series. Then it begins to get a life of its own: its callbacks feel clever rather than desperate, our emotional investment is cranked up, and as the two funniest characters - G.O.B. and Buster - get to take centre-stage, the gag-rate increases (if not quite enough).

There's G.O.B.'s amazing call-to-arms on an Evangelical TV show, his periodic breakdowns, his badgering of George Michael with the words: "Are we good?" and his roofie-ing of his brother ("Poor, forgetful Michael"). There's also "Anus tart", Steve Holt! shouting "Dave Holt!", Buster shouting at some Afghan nurses and a Taliban wedding, and George Michael appearing at the back of a college crowd, joining in with the group who are laughing at the stair car wedged under a low roof. Even in the opening episodes, there's the classic exchange: "That was a low blow, Bob Loblaw", "That was a Bob Loblaw law bomb" (a recycled gag, but a great one), the freeze-frame-or-you'll-miss-it test to be a religious leader, and Ed Helms' pushy catchphrase of: "That way you have it." That appearance is an exception, though. While the returning cast are in pretty good form - particularly Shawkat and Arnett - on the whole the roster of guest stars add very little; still, special mention to Andy Richter and his fictional brothers for continuing to baffle me with their irrelevant unfunniness. Perhaps you have to be familiar with his TV work, in that insular American way. And while the stuff with Ron Howard does allow for that rather brilliant Imagine sign, and a sublime outburst from Tobias, for the most part it feels too much like Julia Roberts pretending to be Julia Roberts in Ocean's Twelve - and no-one wants that.

What I will say, though, is that I watched eight hours of Arrested Development in less than two days (and I might have fitted it into one if I didn't have some Clara Bow movies I wanted to watch); I didn't get past episode six of Modern Family, and I sold a 30 Rock box-set after finishing Season 2. And this wasn't just curiosity value, or getting the most for my money - after all, my Netflix trial was free. I really got a lot out of the show: I found it consistently entertaining, admirably original and sometimes superb. I don't think Arrested Development Season 4 was ever likely to recapture the magic of the show's heyday, but nor does it tarnish its remarkable reputation. People seem increasingly compelled to say that everything is brilliant or terrible, but - like almost everything - this lies somewhere in-between; happily a little closer to "brilliant". Make no mistake, this venture was risky; balls-out bold, even - a stylistic and structural departure that at the same time embraced a new medium. It's far from perfect and it should be funnier than it is, but when it works, it works, and that final image is a thing of absolute beauty.

I'll see you in the queue for the movie. We can meet afterwards and discuss what's wrong with it.