A Star Is Born revisited, Jennifer Lawrence and how to start an argument - Reviews #148

Hello, and welcome to a special Oscars-themed update, as the Oscars happened yesterday and it would be negligent of me not to piggy-back pointlessly on that kind of publicity. To celebrate, I've reviewed a film starring Jennifer Lawrence, who won Best Actress last night, and another starring the first winner of that award and featuring an Oscars ceremony of its own. That this was all just a coincidence shouldn't stop you reading on. JOIN ME. 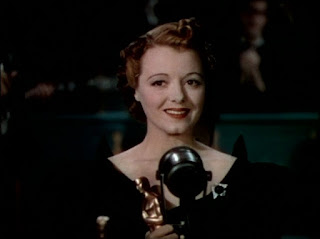 A Star Is Born (William A. Wellman, 1937) - The initial incarnation of this Tinseltown tragedy is right up there with Judy's, and holds up superbly on second viewing, revealing - most rewardingly - additional layers to the stunning central characterisations. We first meet Norman Maine (Fredric March) as he's toppling off his mantle - and his chair - and it's largely downhill from there, via a sanitarium, a night court and three of the saddest and most uncomfortable scenes I've ever had the good fortune to dread coming round again. Esther Blodgett (Janet Gaynor) is introduced as a feisty fighter of a farm girl - not unlike Gaynor's character in Lucky Star - if one with a sensitive soul, but once she gets to Hollywood, with stars in her eyes, we see her as the naive, innocent dreamer she really is. What the film does next is magnificent, but so seamlessly, subtly done, that it's only when the credits roll that you appreciate the shifting, sliding, dynamic: Esther growing in confidence, authority and compassion - growing up, if you will - and Norman sinking, faster than you keep up, his chilling forecast that he has lived too much to have anything left being proved tragically true.

Evelyn Waugh said of Brideshead Revisited that he wanted to write a book about people brought low by nothing more than love and drink. Add a bit of masculine pride into the mix and you have A Star Is Born. The film is perhaps a test of empathy (as I feel something like The Kid with a Bike may be), as its success - or otherwise - is based on how much compassion you feel for a good-looking millionaire whose greatest problem, at least that he will acknowledge, is that his star is slipping. Really, though, he's a man being consumed - from the inside - by demons and disease, slipping into dissolution even as he appears to have it all, as would his contemporary John Barrymore, and their spiritual successor, Errol Flynn. March makes Maine - and his problems - seem utterly, desperately real, in a gutting characterisation that may well be the best thing he ever did. It's only in the final third that the human cost really becomes apparent, though, and up until then it's a lighter proposition, a revealing snapshot - in early Technicolor - of Hollywood in the '30s, and just as fun as that sounds (I'm aware that some people may not think that sounds very fun). I still think Adolphe Menjou's benevolent producer is too good to be true, and Edgar Kennedy's comic sequences seem incongruous, but Lionel Stander brings just the right mix of amusing irascibility and sadistic insensitivity as a kind of hybrid press agent/fixer, perhaps patterned after MGM's Howard Strickling and Eddie Mannix, and Andy Devine is just lovely as Gaynor's first friend in Hollywood. It's a superlative film, wonderfully conceived and scripted - with some of the best barbs coming unmistakably from Dorothy Parker's poisonous pen - and with an emotional clout like little else in '30s cinema. (4) 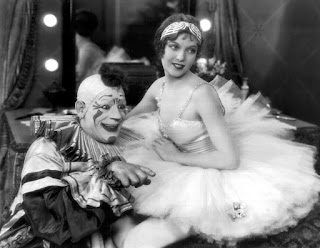 Laugh, Clown, Laugh (Herbert Brenon, 1928) - A gifted clown (Lon Chaney) finds a little girl in the rushes, makes her laugh with his cockerel-based shadow puppetry and takes her under his wing (pun intended), naming her Simonella. When she grows to adulthood, and reveals a bit of shoulder, he realises he loves her in a different way - but then so does the count and reformed cad with whom he shares a psychiatrist. This intensely moving melodrama sticks to the familiar Chaney formula, strikes a few questionable notes (having the count's deep unhappiness manifest itself in bursts of manic laughter seems an unnecessarily gothic touch), could do with a scene showing the children's connection to the comic that would give its final line even greater resonance, and fails to explain its characters' motivations at some key junctures. But who cares? Chaney is sensational, the 15-year-old Atilla the Nun, Loretta Young, is at her ethereal best as Simonella, and the film is stuffed to bursting with unforgettable images of love, longing and desolate desperation, many focusing on Chaney's matchlessly expressive face - painted or otherwise - and all showcasing legendary cinematographer James Wong Howe's unique eye for contrast and composition.

Some viewers may feel queasy about Chaney's sad clown trying to "do a Woody Allen" and cop off with his adopted daughter (legal disclaimer: in Woody's case, it was his long-term partner's adopted, of-age daughter), but these were different times, Young isn't playing a 15-year-old. and the film is so persuasively acted that you can't help but feel for the sad-eyed Chaney, and wish for him some modicum of happiness. It's a gutting, wonderful film and an important one too: in telling the story of a gifted mime who wins every heart except the one he wants, it must surely have influenced the ultimately incomparable Les enfants du paradis. It was Chaney's favourite of his pictures, and with good reason. The TCM release features a wonderful addition in H. Scott Salinan's beautiful new score, which recalls Howard Shore's classic work on The Lord of the Rings. (4) 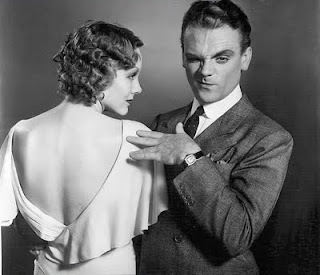 Hard to Handle (Mervyn LeRoy, 1933) - An anarchic Cagney comedy, with Jimmy cast (once again) as an inveterate go-getter for whom the Depression is little more than a mild inconvenience. Having lost the takings from an epic dance marathon to an unscrupulous partner, his versatile promoter spents the rest of this fast-paced, sex-fuelled jolt of Pre-Code hilarity putting his quick wits and absent morals to good use by hoodwinking the ordinary folks of America into taking part in a phony treasure hunt, smearing meritricious gloop over their wobbly bodies or buying up acres of grapefruit groves (a nod to that notorious scene in The Public Enemy). Like Groundhog Day's Phil Connors, he subscribes to the somewhat damning notion that people are morons.

There's little of Warner Bros' famed social conscience at work here, but it's delightfully unpredictable and extremely funny with it - its laughs, unusually for the studio, coming more from the performances and the situations than the repartee - while providing a fascinating glimpse of how my favourite comedy of all-time might have panned out, reuniting sassy Mary Brian and sardonic Ruth Donnelly from the previous year's Blessed Event, originally set to star Cagney. His chemistry with Bryan is both appealing and electric, Donnelly proves a perfect(ly unscrupulous) foil and sometime ally. and Cagney is, of course, magnificent: a whirlwind of energy, playing every comic scenario to the absolute hilt. (3.5)

The Hunger Games (Gary Ross, 2012) - It's Winter's Bone meets Battle Royale meets The X-Factor in this tense futuristic thriller, as Jennifer Lawrence takes the place of her terrified little sister in a televised fight-to-the-death against 23 other kids and teens. The only other contestant from her district is dishy, slightly wood-prone Josh Hutcherson, whose character has so many contrasting facets that I stopped thinking he might be realistically complex and decided he wasn't particularly well-drawn. The plotting, which inserts breathless action sequences at regimented intervals, seems a bit too clinical, the lead-in goes on too long (check out The Wages of Fear for how to properly execute an hour-long prologue to your suspenser), and the gaudy world fashioned around the game is tacky and heavy-handed. But the film has a wild card like few others, allowing you to spend two hours in the exultant company of Jennifer Lawrence. The whole thing hinges on her performance, and she's simply mesmerising. I've seen her in four movies so far (including Winter's Bone - the best of the decade so far - and Silver Linings Playbook, my favourite film released last year), and she hasn't struck a false note in any of them. Here, the story takes the toughest decisions away from her character, Catnip Evergreen, but she's wondrous nonetheless, creating an affecting, kind-hearted, ass-kicking protagonist with an innate emotional intensity who keeps the film grounded and real, even when being interviewed by a man with a blue ponytail in front of the crowd from Take Me Out.

It isn't exactly original - it riffs on the superior Battle Royale, there are shards of Logan's Run in there, and it occupies a similar world to the hugely silly Equilibrium - but it is very entertaining, and has one particularly fine, powerful scene, rather dubiously utilising Holocaust imagery, in which Lawrence volunteers for those there Hunger Games. It's also a well-directed film, in a showy sort of way, employing warped images and aggressive jump cuts while Lawrence is tripping on wasp bites, and fantastic use of sound throughout. It's clearly aimed at a teenage audience rather than an adult one, and perhaps a film like this should do more with its subtext of anti-establishment rebellion and social degradation, but when it tries to it feels forced and shallow, and Ross doesn't really know how to handle crowd scenes (he seems to be taking pointers from tea-time dramas on ITV), so it may be for the best. For all its imperfections, I enjoyed it a great deal, and Lawrence's performance confirms her status as one of the three most exciting actresses around, along with Carey Mulligan and the mighty Michelle Williams (Emily Watson doubtless remains the finest, but can't seem to land too many strong roles nowadays). This has really whetted my appetite for a sequel. Though apparently the "book" is better, whatever "books" are. (3) 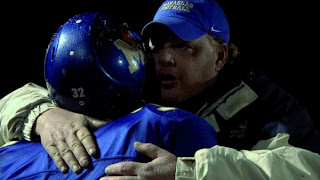 Undefeated (Dan Lindsay and T.J. Martin, 2011) is like Hoop Dreams remade by Disney. It's an Oscar-winning doc about a volunteer high school football coach (Martin Clunes) who whips his troubled African-American charges into a formidable team, as they cope with injury, anger issues and everything else that comes with growing up in black, inner city ghettos (see The Interrupters and The House I Live In for yet more chilling detail). Compared with the benchmark for all documentaries of its type, Steve James' unforgettable Hoop Dreams, it's too much a surface look at the issues it raises - and a calculating, sometimes staged one at that - to be a real contender, but it is slickly done, emotionally stirring when not opting for easy sentiment (Chavis's speech is a wonderful moment), and in entertainment value alone deserves its place in the play-offs. Also, "Why you gotta sit by me for bro? You gay" is my favourite ever way to start an argument. I've spotted a goof, though, they're not undefeated - they lost their first match. What's that you say? A metaphor? (3)

Thanks for reading.
Posted by Rick Burin at 13:13