We went to Wreck-It Ralph (and Paperman) for Valentine's, and I managed to fit in a few other things during the week as well. Tonight I'm planning to catch a Lon Chaney movie, Laugh, Clown, Laugh - I'll let you know what it's like. 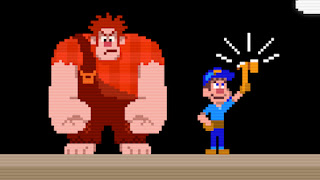 "I'M GONNA WRECK IT!"
CINEMA: Wreck-It Ralph (Rich Moore, 2012) - Ralph isn't such a bad guy. Well, he is a bad guy, but he's not a... bad guy. His job is to smash up an apartment block and he's been doing it for 30 years, as the villain in the arcade game Fix-It Felix, Jr. But tired of being excluded, overlooked and feared - as well as having to live in a dump - Ralph (voiced by John C. Reilly) strikes out on his own, in a confused attempt to switch games and win the medal that he thinks will prove his worth, and see him accepted into society. Fate, though, has other ideas, chucking him into the tooth-achingly sweet world of racing game Sugar Rush, where he's forced into an unlikely alliance with an acerbic, sweet-natured and flickering little girl, known as The Glitch (an unexpectedly affecting Sarah Silverman). The first half of this Disney animation is very good, if a little inconsistent, typified by the way that the fantastic opening voiceover segues into a hit-and-miss meeting of the "bad guys anonymous" group. But the second is simply stunning, its various strands dove-tailing delightfully, the jokes coming thick and fast, and the relationship upon which the whole thing hangs drawn so effortlessly and beautifully that it takes your breath away.

We've seen a friendship between a hulking monster with a heart of gold and a sweet, brown-haired little girl before - in exec producer John Lasseter's Monsters, Inc. - and yet this feels so fresh and funny and original. We've been pitched into a 3D video game world packed with peril and racing cars, in the execrable Spy Kids 3: Game Over, but that was a film that did almost everything wrong, just as this one does almost everything right. There's a sense of ambition and imagination here that's been missing from most Disney animations since its brief renaissance in the '90s - I haven't seen them do anything this good since The Lion King. Take that first, swooping trip into Game Central Station, during which I genuinely craned my neck in a bid to take in the jaw-dropping spectacle across the right side of the screen. Or the amazing "going Turbo" sequence, a masterpiece of comic timing that riffs expertly on the rapidly changing world of gaming. That breathtakingly sad moment at what looks like the spot in the des(s)ert where Ethan and Martin face off in The Searchers. Or the sublime pay-off, which threatens to drown the film's message in a blast of Disneyfied treacle, only to emerge, triumphant, with its convictions intact.

Someone at work expressed surprise that I was off to see a kids' film, but Wreck-It Ralph - like so many contemporary animations - is a movie wholly undeserving of such a tag: it's about disability, anger and alienation, has a hero who's undergoing a mid-life crisis, and features at least a joke a minute that will whizz over the head of anyone under the age of 18. It's about video games, but it's about so much more than that. A good job, as I've only ever played on arcades about three times in my life. (3.5)

And this is the short that's screening with it: 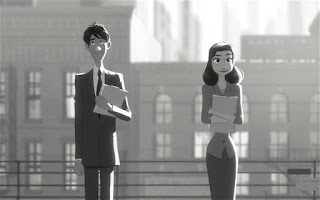 SHORT: Paperman (John Kahrs, 2012) - Wreck-It Ralph is in the unenviable position of having to follow this intoxicating short, a silent, black-and-white masterwork that pays oblique - and then overt - homage to The Red Balloon, as a paper plane with a mind of its own (and a fair few friends) tries to unite two lonely souls. It's extraordinary. (4) 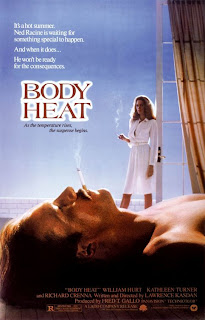 Body Heat (Lawrence Kasdan, 1981) is a sweaty, scintillating neo-noir, in which the horniest woman in America (Kathleen Turner) shags a moustache (William Hurt) into killing her husband. You almost want Hurt to die or go to jail so his willy can have a rest. While it's an homage to vintage '40s noir like Double Indemnity, Out of the Past and The Postman Always Rings Twice (right down to a nattily incorporated fedora), Body Heat also stands superbly on its own two feet: the dialogue is colourful, the plotting keeps you guessing - despite being rich in fatalism - and Turner is dynamic as a woman so warm that she must take off her clothes at every opportunity. Hurt is wooden in places (particularly his penis), the revelations near the end - while gripping - are perhaps revealed too conveniently, and the film should really have ended on a freeze-frame of that photo, but it's still a classy, compelling crime flick, with a sweltering, stifling atmosphere and showy supporting turns from Mickey Rourke and Ted Danson - almost unrecognisable with a fringe that disguises the sheer length of his Easter Island head. And while the writer-director's idea of his hero keeping an illicit affair under wraps is to have him lob a chair through a plate glass window at his lover's house, that scene with the contract discussions is worthy of Wilder. They don't call his Law-rence Kasdan for nothing. (3.5) 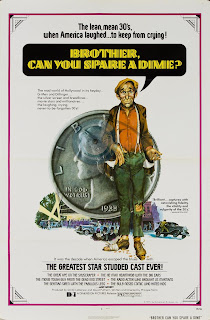 Brother, Can You Spare a Dime (Philippe Mora, 1975) - An impressive, impressionistic and immersive collage of the Depression and its aftermath, arranged in roughly chronological order and mixing newsreel footage with classic movie clips, the majority from Warner - the studio most pre-occupied with the real world - and many featuring Jimmy Cagney, who's used as a recurring character. It gets across, like little else I've seen, the feel of the '30s: a world in flux, with its poverty, violence, confusion and raw ideological fervour, its vivid contrasts, a decade where fantasy and reality clashed, as contemporary concerns bled into movies, and movie stars came out to endorse politicians. And it's chock-full of classic Franklin D. Roosevelt speeches, America's greatest president providing a virtual narration - idealistic, flavourful and funny - even if he looks at his notes a bit much.

It's frequently stunning, then, but not perfect. Some of the thematic and visual juxtapositions are startlingly imaginative - like footage of Joe Louis spread-eagled on the canvas, segueing into Billie Holiday singing prostrate on the floor - but with others it isn't always clear what Mora's getting at, if indeed he knows. The accompanying music is as great as you'd expect - incorporating most of the standards that sum up the era, like Ruth Etting's Ten Cents a Dance and the title tune, delivered in three contrasting versions (including Rudy Vallee's unsuitably effete reading) - though curiously the songs don't always match the pictures: having Nobody Knows You When You're Down and Out play out partly over footage of a flooded New York seems simply incongruous, but then it cuts chillingly to film of homeless, hungry kids beaten down by life at five years old. A simple sequence that runs together clips of the dustbowl at its most unlivable crystallises the horrors facing farmers in chilling fashion, but you can't help but wish they'd had the rights to throw in a bit of The Grapes of Wrath alongside. And wouldn't it make sense - in the same way that That's Entertainment! utilised the An American in Paris ballet - to climax with the most stunning evocation of Depression-era America ever to grace a movie screen, Remember My Forgotten Man from the Warner musical Gold Diggers of 1933, rather than merely offering a couple of snippets, and using a pointless recap of America from 1941-75 as the film's big pay-off?

It has its flaws, then, and you really do need to know something about America in the '30s to follow what's going on, but really it's a bit of a treat, especially if you're a history nerd with a special interest in this period - as I categorically am. The clips of William Wellman helming A Star Is Born, Dillinger's dad defending his boy, and Roosevelt's armed assailant trying to explain what he's been up to are astonishing historical documents. (3) 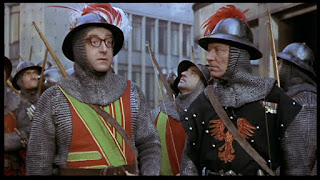 *SOME SPOILERS*
The Mouse That Roared (Jack Arnold, 1959) - A tiny, English-speaking state buried in the French Alps declares war on America, hoping that - following an immediate surrender - it will be flooded with the aid needed to revive its ailing, wine-based economy. Unfortunately, the Duchess (Peter Sellers) and Prime Minister (Peter Sellers) send over-earnest military chief Tully Bascomb (Peter Sellers) to execute their plan, and he returns with hostages and a nuclear bomb. This '60s satire, with faint echoes of Passport to Pimlico, has an absolutely uproarious first 20 minutes (including a perfect opening gag), before settling into a less exceptional groove, making a few wry points about Cold War paranoia and the '60s power balance, but getting most of its pizazz from Sellers' sublime comic gifts - witness the way he turns the Duchess's theoretically unpromising harpsichord performance into a comic highlight, simply by adding a confirmatory "ye may" at the end of a line. Jean Seberg isn't altogether hideous as the love interest. (2.5)
Posted by Rick Burin at 13:09