The Breakfast Club, Rocky VI and my concerns about your heart - Reviews #146

After an explosive start to the year, brimming over with four-star films (four being the highest star rating known to (Leonard )Ma(lti)n), this latest bunch of movies rather brought me back down to earth. Still, it was nice to hand out with the Breakfast Club again - sort of - and Delicious gave me one of my favourite movie moments of 2013 so far (82 years after the fact)... 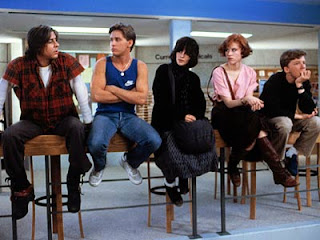 The Breakfast Club (John Hughes, 1984) - A geek, a squeaker, a ginger, a sex pest and a moron bond during Saturday detention, dancing, giggling and smoking weed, but mostly just moaning about their parents. Hughes's high-concept talkathon - and his most fondly-remembered film, belying its bleakness - is surprisingly stagy, makes strange excuses for its characters (Estevez's jock taped a boy's buttocks together to impress his dad) and climaxes with a horrid makeover scene that calls to mind Rosemary's Baby, but it's also funny, quite poignant and frequently spot-on about teen angst and the quirks of adolescent behaviour. And it's all done in the typical Hughes style - bright colours, bombastic '80s tunes and stylised sound - which you'll either love or hate, depending on whether or not you're cool. This being Hughes, there's also a sadistic teacher, and, this being the '80s, there's a bit where the club pull a Michael J Fox (TM), running along a corridor and then having to quickly change direction, skidding noisily across the shiny floor.

It's Judd Nelson's film, really, as the archetypal bad boy: a crowing, abused bully whose aggressive sexual advances sadly tip him over, apparently unnoticed by Hughes, from misunderstood kid to dangerous weirdo. He's the worst actor of the five, prone to woodenness and gormless facial expressions, but he has undeniable presence, and throws himself into the eye-catching and sizeable role with considerable gusto. Of the other club members, Emilio Estevez struggles a little as a supposedly sensitive wrestler, but Molly Ringwald is ideal as the pouting "princess", Anthony Michael Hall proves superb as "the brain" - aside from a brief outing for his "blues" voice (showcased at length in the abysmal Weird Science) - and Ally Sheedy makes for a truly excellent attention-seeker.

It's an easy film to pick holes in, and Hughes would make better movies, but in pop cultural terms it's a towering achievement, a Rebel without a Cause for the '80s, which forms vivid stock characters - a Mount Rushmore of recognisable American teen types - only to send them crumbling into dust. (3) 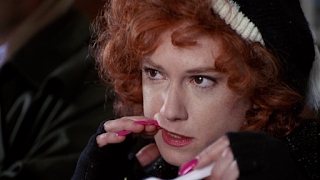 The Firm (Sydney Pollack, 1993) is a very watchable, sometimes exciting Grisham adaptation that lacks credibility, and is beset by a certain vagueness, but gets by on the strength of its cast. An ambitious young Harvard law graduate (Tom Cruise) signs up with a high-powered, secretive Memphis firm, only to find that they're really corrupt, and he's never allowed to leave. Cruise and Jeanne Tripplehorn do their starry bit, but the real draw is a ridiculously good supporting cast, with a realistic turn from David Strathairn as Cruise's jailbird brother, an eye-catching performance from a red-permed Holly Hunter (the same year as The Piano), who seems to have wandered in from a '40s dime novel, and an overpoweringly sleazy one from Gene Hackman, who's simply excellent, twinkling ominously as Cruise's lascivious mentor. (He fancies Tripplehorn, not Cruise. I think.) Elsewhere, Ed Harris turns up as an irascible fed, Wilfred Brimley is gruffly intimidating as the firm's security chief and there are bits from Gary Busey, Hal Holbrook and Paul Sorvino. I've no idea why it's two-and-a-half hours long, but it's good fun for the most part, and the padding comes at the start rather than during a particularly well-edited final third, packed with snippets of action and suspense, cross-cut for maximum effect. (2.5) 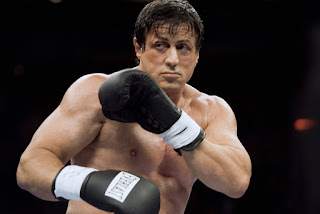 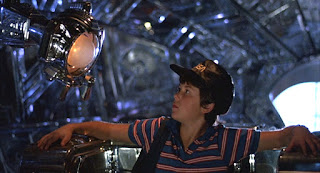 Things are about to get rubbish...

*SOME SPOILERS*
The Flight of the Navigator (Randal Kleiser, 1986) - A 12-year-old boy (Joey Cramer) falls into a ravine and wakes up eight years later, having not aged a day. This maddening slice of mid-'80s sci-fi has a sensational premise and milks it for most of its worth in a spectacularly eerie opening (at least once the interminable doggy credits are over), with a scattering of false scares worthy of Val Lewton, and a couple that are all too real. After that, it morphs into alarmingly obvious family fare, serving up a quick explanation, a friendly (and incredibly irritating) robot and a sentient mail truck that exists only to chivvy the plot along. And the 21-year-old Sarah Jessica Parker, who turns up to flirt with the little boy.

By the halfway point, it's obvious that it's all going to be a big missed opportunity - vapid, plotless and pointless, albeit with an excitable Alan Silvestri score - but the film does at least remember what it's about at its finale (note to the kid: if you do want to be left alone, probably best not to adopt an alien), and I do think it's worth it for that strikingly original opening 30 - one of the creepiest things Disney has ever done, even taking into account the Sorcerer's Apprentice, Pinocchio's questionable subtext and the way they treated little Bobby Driscoll. (2.5) 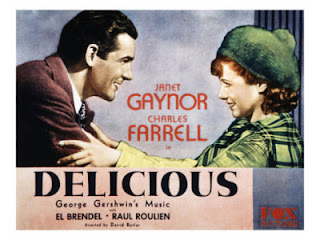 Delicious (David Butler, 1931) - Janet Gaynor and Charlie Farrell co-starred in three of the best dramatic movies of the late silent period: Frank Borzage's breathtaking metaphysical trinity of 7th Heaven, Street Angel and Lucky Star. With the advent of sound, the pair were peculiarly reinvented as a musical-comedy team - albeit one not averse to heavy melodrama - and placed in movies like this one, an antiquated but fairly enjoyable vehicle in which Gaynor's Scottish waif falls in love with rich boy Farrell while en route to start a new life in America, only for the immigration authorities (and his horrendous fiancee) to put a dampener on things. The story isn't the strongest and the comic relief from El Brendel is very dated (aside from his surprisingly funny song, Blah Blah Blah), but Gaynor is incredibly charming - even taking into account her unusual Scottish accent - particularly when shyly crooning Somebody From Somewhere direct to camera, the transcendent highlight of the Gershwins' first full movie score. A vocal coach would tell you there are lots of things wrong with her voice, and whether by accident or design she starts singing ahead of the beat, but that certain quality in her singing, and the subtle emotion she invests in the words just blew me away.

While the movie stops and starts, and rather creaks in that early talkie way, there's curiosity value to spare. Virginia Cherrill, who played the blind flower seller in Chaplin's City Lights the same year, is a massive bitch as the love rival. There's a peculiar dream sequence in which Gaynor is welcomed to America by nine dancing Uncle Sams. And the ambitious climax, set to New York Rhapsody (a second gem from the erratic musical material), is really quite impressive - Gaynor wandering the intimidating city at night, the citizens, the buildings and even the river grasping at her - though it pales alongside similar sequences in Street Angel and Murnau's rather silly film, The Last Laugh. It's weird, it's wooly and there's a daft Russian-themed song called Katinkitsha that seems to have been staged by the world's laziest drunk choreographer (why does Gaynor end the number with a chair round her neck?), but if you aren't won over by the leading lady's wide-eyed characterisation - and that short, earnest tune she sings from under a blanket - your heart may well have stopped beating. (2.5)

Thanks for reading.
Posted by Rick Burin at 13:07