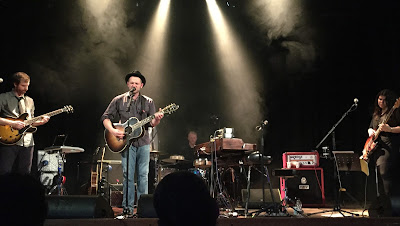 It took seeing David Ford live to turn me into a fan. That was in 2015 when he played a one-man-band show at Soho’s underground Borderline club, looping his multi-instrumentalism in a sweaty, intense show that revealed the unusual potency of both his performance style and his protest-songwriting. Watching him is like witnessing Tom Waits’ soul trapped in the body of Dermot O’Leary. I haven’t seen Ford since, though I’ve listened to him a lot. His new thing is a three-hour, 30-song ‘roadshow’ tour featuring two support acts, a drummer and himself, accompanying one another throughout all three sets. I found JP Ruggieri’s the least compelling: he’s a fine guitarist whose technical prowess perfectly complemented the later two performances, but his own songs are a little pedestrian, and he’s a pleasant rather than dynamic vocalist. Dynamic, though, is the perfect word to describe Magic Numbers alumnus Michele Stodart, whose magnetic presence, arresting mid-Atlantic twang and slew of singular mannerisms – from singing out of the side of her mouth to marching on the spot like a turbo-charged Jona Lewie – lit up the place. There were real echoes of Janis Joplin in her performance, and comparing someone to perhaps the most mesmeric live performer of all time is not something I do lightly.

At around 9:30, Ford takes centre-stage to play “a lot of new songs and a few old ones”, kicking off with a thrilling take on the sub-Waitsian ‘Let It Burn’ and torturing his fretboard for the benefit of the photographers in the pit. The new songs, from ‘Animal Spirits’ – a forthcoming ‘concept album about macro-economics’ – are a mixed bag, with the sleazy, somewhat platitudinal funk-rock outweighing the thoughtful ballads, and the oldies aren’t all his best, but ‘Pour a Little Poison’ (containing perhaps his signature line, “I’m just a whiny little English boy singing the blues”) is raucous, ‘I Don’t Care What You Call Me’ desperately sad, and ‘Waiting for the Storm’ blessed with an eerie foreshadowing and a weary poignancy. The audience misunderstands his desire to ‘not do an encore’ (meaning that he’ll do the songs without pretending to go home), leading to a delightfully silly bit where we have to stay as quiet as possible while he’s off stage in order to coax another song. He does an exuberant 'My Sharona'* with a full band ("Playing this has been a dream of mine for years"), then comes out – unplanned – for another by himself, as a result of the cacophony, breaking his pledge not to play a song with swearing in it as he blasts out ‘Every Time’, his unexpected, unapologetic, counter-intuitive anthem, which seems conventional in its sound and language, but almost revolutionary in its theme and ideas: that fame isn’t for him, and he doesn’t want your pity, that in order to get it he’d ruin the present and break up his happy life. It gets faster and faster, Ford spitting out the vituperative, sincere, self-justifying words as he cranks up the atmosphere and the angst. 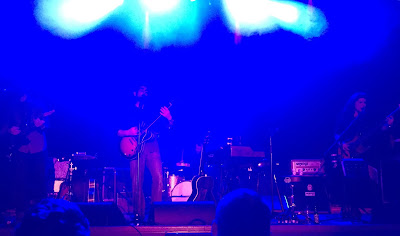 It’s what’s been missing during his enjoyable but faintly pallid set: the singer-songwriter having traded the taciturn mystery of 2015 for a languid, appealing but less explosive approach, which befits the roomy, high-ceilinged venue with its proscenium arch, but perhaps isn’t what David Ford is for. It does, though, mean that we get some of his insights on current affairs: I thought I was bored of people just calling Donald Trump names now, but he really is “a fucking toilet with hair”, so thank you to David for that. I imagine that this show will get better and it better as it progresses, since the band had had just a day and a half to rehearse, but this second date was good enough: occasionally slightly scrappy and rushed, but also affable, great fun and with some truly special moments, thanks to Ford and particularly Stodart. (3.5)

*'My Sharona' by The Knack was a post-punk single by The Knack that got a second wind from its inclusion in the glossy, Hollywoodised but near-iconic Gen X film, Reality Bites. Tarantino had been about to include it in Pulp Fiction, but frustratedly dropped the idea as it no longer seemed fresh.

Thanks for reading.
Posted by Rick Burin at 13:00