We're at a quarter millennium of reviews, but they're not getting any better. This time: autobiography, corrupt cops and more (but worse) Huey Long. 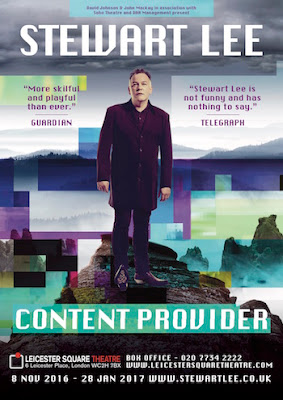 Stewart Lee: Content Provider at Leicester Square Theatre (02/12/16) − A show with all the virtues and vices of a remarkable, occasionally infuriating stand-up. It's been marketed as Lee's first full-length show in five years, but that's semantics: it's simply that he's no longer honing half-hour segments for a TV show, since that TV show's been cancelled. As he pungently points out, though, the BBC does still have the resources to fund a reboot of Are You Being Served?, which given the demise of the British department store should rightly be filmed in an Amazon warehouse, where Mrs Slocombe makes various oblique references to her cat, as a collection of Eastern Europeans look on in confusion.

And really it's no more coherent or cohesive than his previous shows, perhaps less so, without the through-line that his intro (or sporadic meta-commentary) suggests. He pitches it as a commentary on the life of the individual in this social media age, or says it would have been if Brexit and Trump hadn't got in the way. To be honest, that's to his advantage, as he's superb on politics, great at providing a dual-level experience − utilising a constructed persona who's vain, arrogant and contemptuous of his audience and his peers − and able to corral his audience's anger and angst into catharsis, without giving it an easy ride.

But whereas he deliriously, hilariously dismisses Game of Thrones without having seen it, his lack of understanding of modern technology critically undermines his deconstruction of it. There are many things wrong with social media, but if your starting point is that you don't understand the point of Twitter and you think Tinder is a paid-for app where you tick boxes about your interests, then you're fatally undercutting the significance of anything you have to say on the subject. That's the starting point of a Grumpy Old Men audition, not the bleeding edge of British comedy.

That hobby horse also powers a never-ending routine about homemade S&M equipment in the '30s, which extends a throwaway bit from his last tour into an interminable rant about the easy availability of everything in the modern world. I like the idea of alighting on something so perverse and obscure, I admire comics who play with the very rules of stand-up, and I know Lee's repetition, recounting and belabouring of a point are as integral to his work as the principles that underpin it, but the routine doesn't work. If he'd done something as conventional as tying it to an indictment of nostalgia, it might have, but as it is it just sort of lies there, a hollowness at its centre. I feel it's also beset with a pretentiousness that can stop Lee's shows stone dead, jettisoning much of the audience while giving a few of them the chance to show very loudly that they understand the joke; it was the same in January when he brought an unbearable joke about anarcho-syndicalists.

There's material here that's as good as anything anyone is doing right now. Surrounded by dozens of £0.01 DVDs from less-acclaimed, more popular comedians, he revives his assault on Russell Howard by seizing on a TV trailer in which the younger comic says that after running out of loo-roll he wiped his arse on a sock. Lee seizes on this faux-proletarian utterance by declaring it "observational comedy from a Victorian mental hospital", launching him into a superb juxtaposition of chummy Live at the Apollo-style stand-up and horrific human rights violations.

He follows it with an extended bit about other comics' reactions to his taunting of Howard (the sentence: "Why you say those things about Russell Howard, mate?" said perhaps 80 times, Lee's face and voice horrifically contorted) which is daring, inspired, stupid, clever, very funny and deceptively deep, while recalling interviews with Howard, John Robins and others about Lee's thin skin and yet how impervious he is to the idea that he might be genuinely upsetting young comics who idolise him by destroying their reputations in public. (I should add that I've met Stewart Lee a couple of times (once after a show and once on the street) and he was really nice and weirdly shy.)

He's now in an exalted position and I'm glad, because he's an artist who takes chances, someone with a distinctive, doggedly unconventional style, and I think that pretension is often merely what happens when your ambition overtakes your ability or the boundaries of the form, boundaries that are moved over time. But that doesn't mean you can't point out shortcomings in his work, even if he tends to obliterate anyone who does so in a whirlwind of blistering sardonism and repetition. (3) 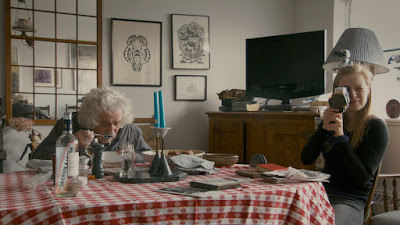 Stories We Tell (Sarah Polley, 2012) − If you're ever worried you might be oversharing, watch Sarah Polley's immaculate 2012 documentary, Stories We Tell, in which the incisively intelligent, staggeringly honest writer-director of Take This Waltz lays bare her family's history while telling the story of her late mother, Diane.

Like her earlier film, it's a movie that talks about things we know and recognise and are terrified by, and yet rarely discuss: the centrality of sex to everything, the difficulties and disappointments of relationships, and the often irresistible attractions that threaten to sever those crucial ties, perhaps irreparably. It's a film about secrets, about stories, about a search for identity, about the way we manufacture narratives to make sense of our memories and our lives.

At the start of the film, one of Polley's relatives asks why she's making it, since who else could be interested in this story? The answer, I think, is everyone. Because if you’re honest, you'll surely recognise parts of yourself in some of these characters, and perhaps in all of them. And all of them are honourable in some ways, spitefully selfish in others, wrestling with agendas and virtues and tragedies.

I don't want to say any more about either the subject or the style, as to do so would numb the impact of its surprises, but it is a remarkable film: haunting and bravura and with a genuine ovaries-out bravery that knocked me sideways. (4)

The Seven Five (Tiller Russell, 2014) − The apparently shameless Michael Dowd waves his arms about a lot as he explains how he made thousands of pounds committing robberies and drug deals as a New York cop in the 1980s. This is basically Cocaine Cowboys but not set in Miami and a bit more nuanced, thanks to a minor but appreciable grasp of morality and a central bromance as Shakespearean as the relationship between Paul and Frances in last week's Apprentice. (2.5) 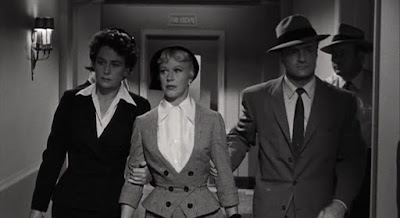 Tight Spot (Phil Karlson, 1955) − A clunky, unconvincing crime film, with hapless lurches in tone, about luckless model Ginger Rogers sitting in a hotel room talking, as she tries to wriggle out of testifying against an underworld kingpin. Edward G. Robinson is the tough, plain-talking DA., with Brian Keith an irascible, sweaty cop who starts to warm to her.

For an hour, it's exceedingly stagy, its mannered script cursed with a uniquely irritating sense of humour; though there is one really sweet scene in which Rogers and Keith dance to a song on the radio, and the thaw sets in. Then finally the film judders into real life, transcending its origins to set up for a tense climax with a couple of really nice little touches in both the script and direction.

I've only ever seen Rogers give one great performance, in Gregory La Cava's dazzling comedy-drama Stage Door and she's all over the shop here (as is her accent), in a role that would have best suited a 1933 Barbara Stanwyck; for all that, she has odd moments of clarity and believability, and as a HUAC cheerleader doubtless cherished getting to state the case for informing. Keith isn't bad, if rather too hulking and obvious, so it's left to Robinson to take the acting honours, as assured as ever, in easily the least interesting of the three parts. (2) 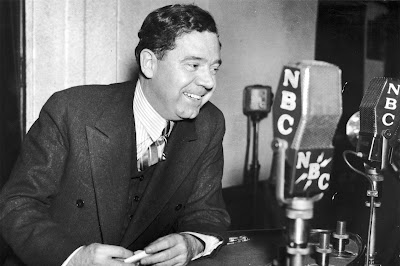 Huey Long (Ken Burns, 1985) − A poor documentary about one of the most fascinating figures of the American century: the rabble-rousing Louisiana radical (and spit of Frank McHugh), Huey Long, who wielded more power over his state than any politician in history and was gearing up to run for president when he was gunned down in 1935.

I've just read T. Harry Williams' phenomenal, Pulitzer Prize-winning biography and, next to that, Ken Burns' film seems embarrassingly trite and shallow, conspicuously lacking in a coherent narrative voice. Williams got to the crux of every matter: from charges of fascism and racketeering to laying bare Long's extraordinary qualities and his acts of petty-minded vindictiveness. Here, one person says one thing, another says the opposite, and you've no idea which of them is telling the truth.

I was interested to see Robert Penn Warren interviewed, as Long is mostly remembered today (if at all) as the inspiration for his book, All the King's Men − twice adapted as a film − but his only telling contribution is to read a couple of excerpts, the second accompanied by a touching montage.

It's slim pickings all round, really. Long's son Russell provides the best of the insights − including the memorable contention that by subverting democratic institutions and safeguards, his father actually promoted democracy, because for the first time people got what they had voted for − Randy Newman sings a nice song over the closing credits, and there are a few choice archive clips, but just read the book. (2) 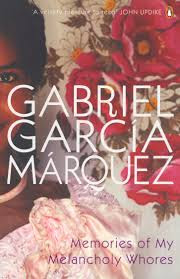 Memories of My Melancholy Whores by Gabriel García Márquez (2004) − More profound and moving than any novel about a 90-year-old hiring a 14-year-old prostitute for his birthday has any right to be. Its language like silk or sand, its narrator pitiful and poetic and precise, his moments of nobility and beauty offset by a pestilent past and a pitiless self-awareness, as he moves from voracious self-involvement to reflective idealism and finally a cagey understanding of the same. Some of its grace notes (like citing numerous books I could hardly break off to read) seem perversely obscure, as does Márquez's starting point, as if he's trying to prove that he can fashion something rhapsodic, pure and mature out of the most offputting material. Or he's just a bit sexist. I'm new to his work. (3.5)

Thanks for reading.
Posted by Rick Burin at 12:28