Friday, 2 October 2015
at the Barbican Centre 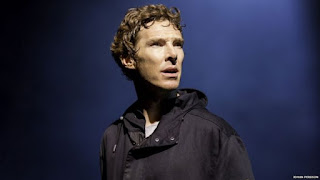 Hamlet was fairly good, but no better than that: a curious, tonally awkward production that accentuated the absurdism of the character's descent into madness, drawing attention to the play’s odd lurches in mood, which doesn’t always play well to a modern mind.

Benedict Cumberbatch, of course, is the sweet prince who becomes markedly less sweet upon learning of his father’s murder: as the king was poisoned, now his son’s mind is poisoned: flitting from revenge fantasies to abusive rants to (in this adaptation) playing in a toy castle. The show begins with him listening to Nat ‘King’ Cole’s Nature Boy on a gramophone, before the curtain rises to reveal a stunning set depicting a castle hall and centring on a banqueting table set at an angle, guests descending a stately, statuesque staircase along one wall. It’s a magnificent moment, but it soon becomes clear that the film has traded a basic, thrilling intimacy for these fleeting instances of theatrical splendour, as everyone is just rather far away. And for some reason that one could probably imaginatively justify at a stretch, but which I’m not going to, the table is littered with the antlers of recently deceased deer. In another curious bit of staging, the set also goes way, way back. It’s a design pregnant with possibilities, but it’s not generally used as imaginatively or intelligently as it might be: mostly for chase sequences or to suggest the size of the building. Indeed, the only moment when it really comes into its own is during Ophelia’s touching departure from this planet.

That’s also the only part of the play in which Ophelia works as a character, since Sian Brooke has apparently never encountered a mentally ill person before, or, indeed, a person. Her wretched, inane twitching is like every stylised approximation of madness you’ve ever seen, but somehow worse. The rest of the supporting cast struggles too (though not quite so much), aside from Ciarán Hinds’ dangerous, repentant, rather bluff Claudius, Karl Johnson – an effective ghost, particularly when appearing within the players’ stage – and Matthew Steer, an amusingly apprehensive, confused Rosencrantz. I don’t know why Kobna Holdbrook-Smith was cast as Laertes: there does seem to be a tendency in London theatre to incongruously bestow black actors with traditionally non-black roles to which they’re not very well-suited; and unless I’m missing something, it’s not done for purely artistic reasons.

At times, though, this adaptation really does work. “What a piece of work is a man” remains one of the most remarkable speeches ever written, with a vast scope and an overpowering emotional pull, and Cumberbatch draws out much of its haunting power. He’s good, throughout, actually: less drenched in spit-flecked venom than Maxine Peake’s recent genderblind characterisation and lacking her manic, vituperative if one-note comic energy, but committed to the legendary role, finding flashes of anger and shards of sorrow that illuminate the stage, and drawing the eye even when the action is elsewhere on that rather cavernous stage. Having said that, I’m not sure that what he offers us is Hamlet: it’s more a fusion of the character and his stock persona, which can be a little too knowing and in control to suggest true pain, true passion and true madness.

He’s also undermined by an oddly silly, adolescent touch in which people act in slow motion while he delivers his solliloquys, an approach that distracts from several of the play’s most important moments. That kind of am-dram silliness is one reason that this production is unlikely to satisfy Shakespeare buffs, but then neither is what I’m about to say, which is that a lot of Hamlet is quite silly. I wouldn’t actually mind some judicious cutting of the text and not just for reasons of length: keep the killer dialogue, but dump the signet ring, the poisoned blade and the comic longeuers in which Hamlet turns into a kind of wankerish clown. Doubtless some pseud will tell me that Shakespeare is subverting the very nature of plotting (just like he’s a feminist and not an anti-Semite), but I really think that if someone made a TV drama that hinged on these self-same elements, everyone would say it was shit.

The play probably will appeal to Cumberbatch fans, though, as it’s as close to a star vehicle as a Shakespeare play is ever going to be, and because he gives them what they want: charm, charisma, effort and Sherlock-ish comedy, dressed informally or in mocking, post-modern military garb, striding around a stage on which no expense has been spared – would that similar effort had been spent finding a cast – and interspersed with a handful of knockout moments. The most notable of all is a magnificent pièce de théâtre at the end of the second act, which informs the impractical but intriguing staging of the rest of the play. It’s an effect that I won’t spoil for those likely to see it: a very exciting, engaging bit of theatre in a schizophrenic, ultimately disappointing production. (2.5)
Posted by Rick Burin at 18:08