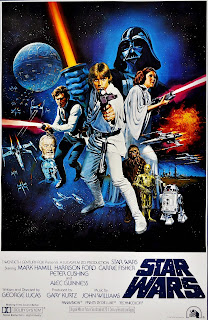 It was my birthday, so I watched the original cut of Star Wars again.

It is, of course, an endlessly brilliant mash-up of sci-fi movie, serial, WWII flyer flick and western that will never, ever get old. I’m always amazed that it’s as popular as it is: objectively, Hamill is wooden, the script is as full of jargon and corniness as it is wit and credible emotion, and it ends with a battle won but the war only just beginning – but who wants to be objective? It’s bloody amazing. Here are 10 assorted things I love about the greatest B-movie ever made:

1. Luke looking out into the galaxy, as two suns loom above him.

2. The burning of the homestead, cribbed from The Searchers and every bit as powerful and terrible and wondrous.

3. The unbelievably shit, moth-eaten wolf alien thing in the Cantina, which looks like it’s come from a jumble sale.

4. “I felt a great disturbance in the Force, as if millions of voices suddenly cried out in terror and were suddenly silenced.”

6. Vader standing up for old-fashioned values: “Don't be too proud of this technological terror you've constructed”. The Force is, like, way better.

7. The damsel in distress being a sarcastic, ass-kicking action hero.

Han: “Look, Your Worshipfulness, let's get one thing straight. I take orders from just one person: me.”
Leia: “It's a wonder you're still alive.”

8. The stripes of stars as the Falcon goes into lightspeed.

9. The noise a TIE fighter makes.

10. Han coming back, and the look on his face when he does.

Han shot first too. As he should do: Greedo was threatening him with a fucking gun.
Posted by Rick Burin at 13:17