Ten things I love about The Empire Strikes Back 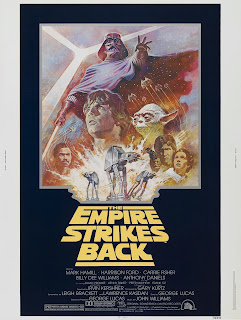 *LOADS OF SPOILERS, BUT HAVE YOU NOT SEEN THE EMPIRE STRIKES BACK?*

Continuing my rewatches of the original cuts of the original (let's pretend the only) Star Wars trilogy, here are 10 things I love about The Empire Strikes Back, the best of the series, without any shadow of a hint of a suggestion of a doubt: 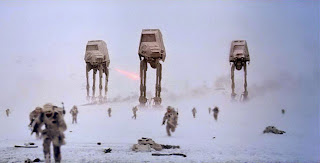 1. The Ice Planet of Hoth. Where do you want to start the film? How about in a freezing, almost uninhabitable wasteland where the Rebel Alliance ride about on funny, hoppy little white camels (Tauntauns), until dock-off tanks with gargantuan legs (AT-AT Walkers) suddenly hove into view, shooting the shit out of everything that moves, and many things that don't.

2. The hero spending most of the film sitting in a swamp complaining, accompanied by a philosopher and great warrior who abhors war, delights in wasting people's time and thinks that pretending not to be the person they're looking for is just the best joke ever. 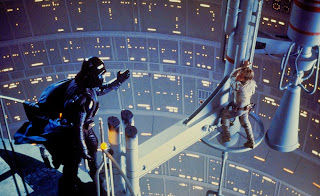 3. The way it looks. Just about every image in Empire is stunning and iconic, thanks to stylised costumes, staggering sets (that catwalk in Cloud City!), and a sense of visual composition that makes everything seem crucial and seismic without being portentous or melodramatic. That eye for a killer image belonged to Peter Suschitzky, who started off working for Peter Watkins at the BBC and now hangs around with David Cronenberg.

4. Vader. No amount of parodying or familiarity will change the fact that he's the most terrifying screen villain of all time, and he has two entrances here that are just dynamite.

5. Ineffectual Englishmen. Most of the Imperial fleet is manned by mediocre journeymen actors from Britain, lending a certain weird charm to the sequences in which Vader keeps murdering them for being useless.

6. "I love you", "I know."
Harrison Ford once said that he belonged to the "make-believe" school of acting. He also belonged to the "instant genius" school of screenwriting. What are the two most memorable moments of his career? This and shooting the whirling dervish in Raiders, right? And he ad-libbed them both. The Han-Leia relationship throbs with sexual tension throughout.

7. Male bonding. 3PO and R2, Chewie and Han, Vader and Luke. There are some great moments of bromance in this movie, hardly surprising when you consider that co-writer Leigh Brackett was the woman behind Howard Hawks's Rio Bravo (and the director's various semi-remakes). Nobody did understated, unsentimental bonding like Brackett, and those little moments add up to an awful lot: there's an undercurrent of emotion here that gives a lump in the throat, and is missing from every other film in the series.

8. Lando. The good-bad character is a staple in the westerns that Lucas was drawing inspiration from. Dan Duryea's versions didn't tend to come with killer cheekbones and a blue cape, though.

9. Hamill's acting for the final 20 minutes. Where the hell did that come from? As Luke Skywalker, he spends the first 220 minutes of the trilogy giving line readings that might sound a trifle unconvincing in a primary school nativity. Then he gets a nasty surprise from his dad, and suddenly he's Laurence Fucking Olivier, all wailing anguish and a tortured soul. It's like a dagger to the chest and a euphoric catharsis all at once. 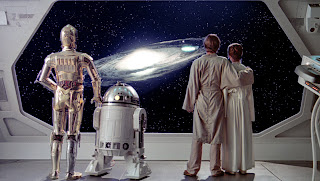 10. The whole film possessing the quality of a nightmare. Almost every heroic character is maimed or dismantled or betrayed, Vader is untouchable, and nothing is resolved, its only victories Dunkirk-like retreats. So why can't I stop watching it?

Guess what's up next? No, not Care Bears Movie II: A New Generation, Return of the Jedi.

You can read the first in the series here, it's all about Star Wars.
Posted by Rick Burin at 18:25