Some thoughts on Lulu in Hollywood

Lulu in Hollywood by Louise Brooks (1982) 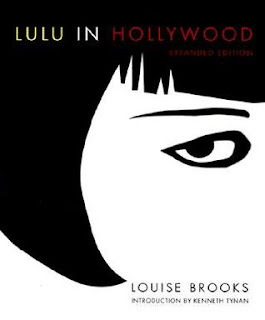 I find Louise Brooks a little over-hyped as an actress. Yes, she was a distinctive, even iconic performer, with her helmet of black hair and that aggressive, feline sensuality. Yes, she attained a naturalism rare in silent cinema, even if she only starred in a handful of pictures. But was she really that much better than Bow, Gish and Gaynor? No. No, she wasn't. Like Johnny Guitar and The Girl Can't Help It, she was taken up by the Cahiers du Cinema crowd in the '50s and elevated beyond all others of her age in a blaze of hysterical hyperbole. In a way, that's gratifying: after all, she had been unfairly dismissed - then unjustly forgotten - after Pandora's Box died on its arse at the box office. But in another way, it's extremely silly. "There is no Garbo, there is no Dietrich, there is only Louise Brooks," French film archivist Henri Langlois once said, which translates into English as, "I have an erection."

As a writer on film history, though, I think Brooks may have no equal. This intuitive, incisive and staggeringly insightful collection of essays, written in her inimitable, jaggedly beautiful prose style, turns everything you thought you knew about movies and the movie business on its head. W. C. Fields was a sad loner with eczema whose stage humour was killed stone dead by the realism of his film persona. Bogart was a gorgeous, well-bred, perpetually-exhausted thespian transformed by the sexual anguish of his third marriage. MGM purposefully ruined Lillian Gish's career through a programme of purposefully lousy vehicles and fan magazine smears. Marion Davies wasn't the carefree socialite of legend, but constantly consumed by the green-eyed monster. And Louise Brooks - that cloche-haired monument to flapperish, pure-centred bodily liberation - will never write her memoirs, because she "cannot unbuckle the Bible Belt" and reveal the sexual obsessions that defined her life as, she argues, they do everybody's. (She is a bit preoccupied with sex. After all, she had rather a lot.)

Brooks is brilliant on everything from acting to the studio system, her own career, the singular directorial technique of G. W. Pabst, the hypocrisy of Hollywood and even - most trickily - the downfall of her friend Pepi Lederer, brought low by societal pressures, selfish companions and substance abuse. She offers a vivid picture of location filming, rips apart the widespread predilection to mythologise two familiar types of star, and crafts perhaps the most alarming synopsis of a film's ending that I have ever read. She's also intimidatingly knowledgeable about literature - pegging herself as "the best-read idiot on the planet" - and augments her prose with apposite insights from many of the world's finest writers.

She can be pedantic, and bitchy, even vindictive, but she's also forthright and honest, with a devastating turn of phrase and real things to say: perfectly-formed theories full of wisdom, augmented by first-person knowledge and set aflame by righteous anger.

The book also contains Kenneth Tynan's classic history-lesson-cum-interview-cum-love-letter, The Girl in the Black Helmet, and a brief, hagiographic epilogue by one of Brooks' friends, the German film critic Lotte Eisner. If you have any interest in '20s and '30s cinema, Lulu in Hollywood is one book that you have to read. And, suitably for such a trendsetting screen siren, its many insights are housed within a wonderfully striking front/back cover combo.

HERE ARE SIX OF THE MOST MEMORABLE PASSAGES:

Brooks on her character's fate in Pandora's Box (*SPOILERS AHOY*): "It is Christmas Eve, and she is about to receive the gift that has been her dream since childhood. Death by a sexual maniac." (I find this possibly the most troubling couplet in the book, because of the sexualisation of youth and the fact that Brooks herself was abused as a child.)

Brooks on Lillian Gish: "Marked first for destruction [by Hollywood bankers] was Lillian Gish. She was the obvious choice. Of all the detestable stars who stood between the movie moguls and the full realisation of their greed and self-aggrandisement, it was Lillian Gish who most painfully imposed her picture knowledge and business acumen upon the producers. She was a timely martyr as well, being Hollywood's radiant symbol of purity standing in the light of the new sex star."

Brooks on Hollywood folklore: "In 1922, when I first arrived in New York, I heard all sorts of gags, jokes and anecdotes, and over the past twenty years of reading I have been brought to a condition of nausea as I have found them 'assigned successively' to various film celebrities. There are two categories of celebrities - fitted with appropriate anecdotes - that writers and readers appear to dote on with foolish, untiring enthusiasm. They are the tramp-type woman star delineated by her outrageous conduct and the drunken actor whose cruel antics are considered hilarious."

Brooks on Bogart: "Humphrey Bogart spent the last twenty-one years of his life laboriously converting the established character of a middle-aged man from that of a conventional, well-bred theatre actor named Humphrey to one that complemented his film roles - a rebellious tough known as Bogey."

Brooks on Marion Davies: "To be a true Marionite, one had to hold the belief that mr Hearst had been to bed with no other woman since he met her. Obviously, I did not believe this."

Brooks on understanding her past: "[Film historian Richard Griffith] identified me as 'Louise Brooks, whom Pabst brought to Germany from Hollywood to play in Pandora's Box, whose life and career were altered thereby.' When I read that, thirty years after I refused to go back to Hollywood to do those retakes on The Canary Murder Case, I finally understood why."
Posted by Rick Burin at 20:19