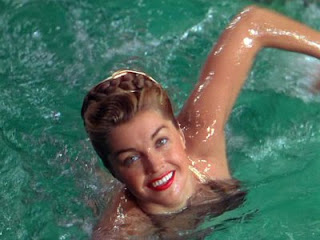 Esther Williams, who has passed away aged 91, was the legendary star of MGM musicals, a wartime pin-up and former swimming champion whose wet-through routines in movies like Bathing Beauty, Million Dollar Mermaid and Dangerous When Wet (opposite Tom & Jerry) essentially created the Olympic sport of synchronised swimming. It's not often you can say that an actress did something quite unlike anything that came before or since, but Williams did: she created an entire genre of which she was the only proponent. She was a limited actress, but a magnificent star, whose stunning, startling water ballets - which she co-choreographed - created many of the defining moments of '40s and '50s cinema.

She also wrote one of the great books about Hollywood at its height.

So what would you imagine that the autobiography of Esther Williams, MGM’s beloved musical swimming sensation, would be like? Well, the middle section of the nattily-titled Million Dollar Mermaid (2000) is like that: fun, splashy, gossipy, though with an unexpected feminist edge. We learn that producer Joe Pasternak ate spaghetti with his hands, Stanley Donen liked to eavesdrop on conversations about himself from behind a curtain, and Joan Crawford wasn’t averse to wandering around a deserted MGM at night, dressed as a bird. And then there are her tales of Johnny Weissmuller, superbly debunked by Cheeta the Chimp in the index of his autobiography.

It begins, bizarrely, with a chapter in which Williams and ghostwriter Digby Diehl recall the time she scored LSD with the help of Cary Grant, and then hallucinated that she’d consumed the identity of her brother – who died tragically young – and was turning into a hermaphrodite. I can imagine the hordes of American movie fans at their local bookshop, protesting: “When I bought the autobiography of beloved MGM musical swimming sensation Esther Williams, I didn’t expect that the first chapter would include her saying: ‘I felt my penis stirring’.”

The next chapter, detailing her abuse at the hands of her adopted brother, is simply horrific – desperately sad – before the book proceeds to morph almost instantly into the light, undemanding read you might have anticipated. Well, until her second husband gambles away all her money.

I’ve read a fair few Golden Age autobiographies and Million Dollar Mermaid is one of the best, full of the kind of delightful detail that colours your perceptions from then on. The first thing I think when I see director Mervyn LeRoy's name on screen nowadays is that he apparently gave a single piece of advice before every camera-roll: “Let’s have a nice little scene”.

Williams has a slightly self-serving writing style and doesn't come out of the book as the saint she envisages: one can query her heartlessness in the treatment of a boyfriend's wife, the way she hangs poor old Jeff Chandler out to dry with tales of his cross-dressing, and the fact that she hung around with Franco's mates in Spain, but for all that it's a hell of a good book and she's an engaging, amusing companion: one who lived a full, fascinating and often fearlessly feminist life. 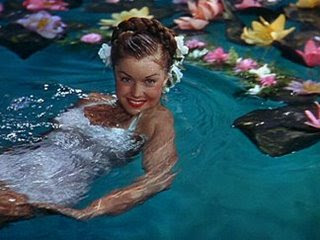 ... her LSD trip: "When I looked in the mirror again, I was startled by a split image: One half of my face, the right half, was me; the other half was the face of a sixteen-year-old boy. The left side of my upper body was flat and muscular, like the chest of a boy. I reached up with my boy's large, clumsy hand to touch my right breast and felt my penis stirring. It was a hermaphroditic phantasm that held me entranced as I discovered my divided body. I don't know how long I stood there touching and exploring, but I was not afraid. Finally, I understood completely: when Stanton had died, I had taken him into my life so completely that he became a part of me."

... her movies, and those of Judy Garland, and Tracy and Hepburn: "People stood in line to see these films not because of the title or the plot, but because we were in them, and the revenue from these 'predictable' movies financed the production of a lot of turgid dramas and bad comedies that nobody stood in line for."

... Jeff Chandler: "'Jeff, are you getting help? Are you seeing a therapist?'
'Yes, of course.'
I felt a strong intuition and blurted it out: 'Your therapist is a cross-dresser too, isn't he?'"

... Joan Crawford: "Joan Crawford, feeding off the adoration of sycophants and decked out in her turqoise bird outfit, begging an imaginary public not to abandon her, is just one of many stars who became almost pathologically unable to deal with growing older." Ouch.

And here's a quick guide to her best movies:

A Guy Named Joe (Victor Fleming, 1943) - Williams made a good early impression with a dramatic role in this transcendent WWII fantasy, later remade by Spielberg as Always, starring Spencer Tracy and Irene Dunne.

Bathing Beauty (George Sidney, 1944) - Her breakout success began life as a Red Skelton comedy called Mr Coed. MGM's third floor brains were no mugs, and changed the title when they saw who was sprinting away with the movie.

Ziegfeld Follies (Merrill Pye - uncredited, 1945) - Williams' smiley, water-lily heavy ballet is one of the highlights of this all-star compendium.

On an Island with You (Richard Thorpe, 1948) - Cheery Hawaii-set fun with a good cast and some great numbers: Williams in the water and Cyd Charisse hoofing on dry land. 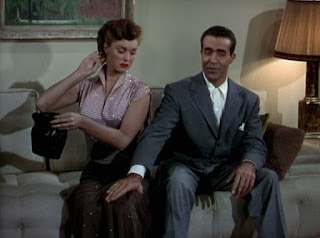 Neptune's Daughter (Edward Buzzell, 1949) - This standard Williams vehicle is best remembered for foreshadowing her move into swimsuit design (after her career dried out, she became a hard-nosed businesswoman), and for her passable, Oscar-winning take on the classic Baby It's Cold Outside.

Take Me Out to the Ball Game (Busby Berkeley, 1949) - On the Town, but with baseball, with Williams crowbarred into the movie at short notice. She was miserable throughout filming; it doesn't show.

The Million Dollar Mermaid (Mervyn LeRoy, 1952) - Williams gave her best dramatic performance in this biopic, playing Australian swimmer Annette Kellerman. She was cast opposite Victor Mature, with whom she promptly began an intense affair.

Dangerous When Wet (Charles Walters, 1953) - Charming story about a Channel-swimmer (Williams), lit by that classic dream sequence in which she swims with Tom & Jerry, and the draining action climax.
Posted by Rick Burin at 19:10