Some shorter reviews this time, as you're busy and I don't want to be a nuisance. 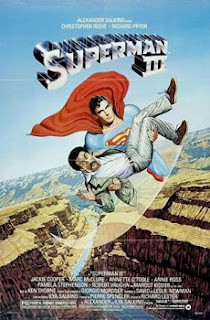 Well, you can't accuse them of misrepresenting the movie, anyway.

*SPOILERS*
Superman III (Richard Lester, 1983) - Every so often you'll come across a film that you've always heard is terrible, and find that it's actually an undiscovered gem, a little masterpiece, a bafflingly overlooked beauty fully undeserving of its terrible critical reputation. Superman III is not that film. Superman III is shit.

The first half-hour of the film is actually alright. The slapstick ballet, while completely incongruous, is quite cleverly conceived (I like the fiery penguin, anyway), the sequence in which Supes gets changed in a passport photo booth is neat, and the two scenes shot at Clark's high school reunion - despite some weak comedy and an attack of the smugs - are genuinely very persuasive. Is it a bird? Yes, it's Annette O'Toole as lonely single mum Lana Lang, and she's really rather affecting, dancing with Clark to Earth Angel, one of the songs used so memorably at the Enchantment Under the Sea dance.

These sequences are interspersed with some high-grade idiocy and poor writing, but even the baffling inclusion of Richard Pryor doesn't feel like too much of a problem at this stage. He's walked into the wrong film by mistake, but he's still being mildly amusing. Come the 30-minute mark, though, and things start to go very wrong. Watching Superman II and III, you'll believe a man can fuck up a promising film series - and that man is Dick Lester. In this outing, the director's visual gags work reasonably well at first, with a Tashlin-ish sense of invention tied to a nicely rhytmic editing style. But boy can his stuff get irritating fast, partly because he has no conception of moderation. And partly because lots of his ideas are atrocious.

He isn't helped by one of the worst scripts of the decade. Granted, there's the odd zinger in there - "I ask you to kill Superman, and you couldn't even do that one, simple thing" - but such concessions to class are overwhelmed by reams of clumsy voiceover, risible exposition ("Kryptonite - I remember reading about it in an interview with him") and boring story. While Pryor's get-rich-quick gimmick is a clever touch later borrowed by Office Space, the bulk of the plotting is oppressively tedious and seems to bear the unmistakable mark of having been made up the night before shooting.

Though Reeve has fun as "Bad Superman", straightening the Leaning Tower of Pisa, blowing out the Olympic flame and - best of all - trying to shag Lana instead of saving a lorry that's hanging off a bridge, very little of what he does in the film makes any sense at all. Why would he accept a gift that is quite clearly Kryptonite? Or think that his alter-ego could be destroyed in a trash compacter? Oh, I know: HE WOULDN'T.

On paper, the film sounds fun, despite possessing perhaps the most singularly unpromising poster of all time. There's Superman going rogue, Pamela Stephenson cropping up as a pneumatic, deceptively intelligent moll, and a script that promises frequent recourse to some very '80s Doomsday predictions about artificial intelligence. In practice, it's just one long, embarrassing exercise in tedium and mythos-trashing, ill-conceived in just about every way. It even has the gall to offer a rather charming final five minutes, an inexplicable "look what you could have won", with a modicum of respect for its hero, and everything. It's all too laughably little, too ludicrously late, clocking in a full hour-and-twenty after the bottom fell out of the movie. And no matter how sorry he was afterwards, Supes still ruined the Olympic opening ceremony, didn't he? Wanker. (1.5) 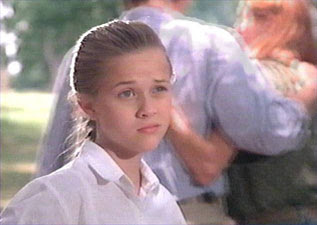 Self-proclaimed "US citizen" Reese Witherspoon, showing off her insolent, wither(spoon)ing glare, back when the various components of her head were more in proportion.

The Man in the Moon (Robert Mulligan, 1991) - A flawed, familar but very worthwhile coming-of-age story, set in the rural South during the '50s and focusing on a 14-year-old tomboy (Reese Witherspoon in her screen debut) who falls in love for the first time, only for her 17-year-old heartthrob to become smitten with her sister. This final film from To Kill a Mockingbird director Mulligan is overly melodramatic in story terms and overly schmaltzy in presentation: shot in soft, sunny, TV movie-ish hues by Freddie Francis and cursed with an overbearing musical score that only really works in one scene - when its young heroine is gazing forlornly through a cemetery fence. But it's blessed with sincerity and self-confidence, has some unforgettable moments amidst the corn, and is lifted far out of the ordinary by Witherspoon's imperfect but brilliant debut turn. While she's still learning how to transmit complex emotion, there's something very genuine and attractive about her performance, illuminated as it is by a rawness and honesty that's since been eroded by the Hollywood machine. The film's shortcomings are clear, but it casts a spell: one that lingers. (3) 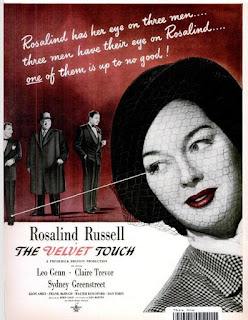 Yes, it's the most disingenuous film poster of all time, featuring a tantalising comic tagline and Rosalind Russell's X-ray vision.

The Velvet Touch (Jack Gage, 1948) - An unusually erudite mix of noir, thriller and melodrama, with a predictable, poorly-paced plot but a credible theatrical atmosphere and a very strong cast. At its centre is one of Ros Russell's best dramatic performances, as a stage star who accidentally kills her despicable director (Leon Ames). Her character is making a transition from comedic roles to meatier ones, and so was she; despite the wealth of familiar faces on show, this is unmistakably a star vehicle, tailored to her talents. But while Russell makes a deep impression with her powerful, commanding performance, the film's greatest joy is Sydney Greenstreet, as wonderful as ever playing an omniscient, belly-laughing, theatre-loving cop. Incendiary noir icon Claire Trevor fairly devours the sets as his self-pitying chief suspect. (3) 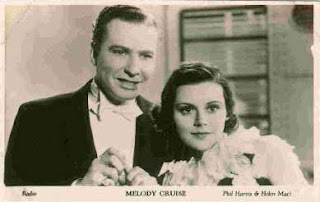 Melody Cruise (Mark Sandrich, 1933) - An imaginatively-directed, super-stylised musical comedy, made by Mark Sandrich a year before he started working on the Fred and Ginger films, with inventive sequences based on the rhythms of everyday life - the first of which is a gem - some shimmering photography and the snazziest wipes I've ever seen. The Pre-Code story, full of women in their underwear, risque dialogue and arse-slapping, sees Phil Harris (later the voice of Baloo the Bear) bizarrely cast as an irressistible lothario and "gay boy type" who chases dames on a big boat, as his pal Charlie Ruggles tries to dissuade him from settling down with any of them - including a bright-eyed schoolteacher (the ever-appealing Helen Mack). The story's much too slight, there are only a couple of laughs and the love interest thinks nothing of throwing litter in the sea (boooo!), but it's also musically innovative - with plenty of rhyming dialogue - possesses the blueprint for Born Yesterday's closing gag, and is just amazing to look at: get a load of that sheet music in the night sky, made out of shining stars. Due to the paucity of plotting, there's even time for Sandrich to crowbar in an ice ballet number, shot from above in a slightly imprecise tribute to Busby Berkeley. (2.5)

Thanks for reading.
Posted by Rick Burin at 21:06