Coming up in this very special* 150th reviews collection: all the latest from behind the scenes at Clintfest '13 - a private film festival held in my room during which I watch some Clint Eastwood films - which really kicked into gear this past week. Plus, as promised, a Dardennes brothers movie. I have another from LoveFilm to watch, The Son, so I'll be reviewing that next time, along with more Clint than you could shake a stick at. Or would care to. 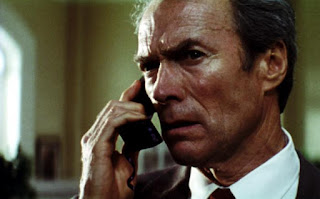 In the Line of Fire (Wolfgang Petersen, 1993) - An ageing secret service agent (Clint Eastwood), still haunted by that day in Dallas in 1963, gets drawn into a deadly duel with elusive, lilting-voiced psychopath John Malkovich in this pulsating, nerve-shredding thriller. Jeff Maguire's script - based on research by producer Jeff Apple - sticks closely to rigid screenwriting rules: as well as the tragedy in the hero's past, both he and his nemesis have idiosyncratic hobbies; but it makes sense that a secret service agent who failed that day would never get over it, that this melancholic soul would find escape in tinkling the ivories, and that a metciulous DIY terrorist such as Malkovich's would delight in model-making. And crucially such traits augment, rather than replace, the human characteristics required to pull you into a story of this kind. The hero and the man who claims to be so very much like him are both believable, persuasive creations, heightened and unforgettable though they are. Just as their characters are perfectly matched, so are their performances. Malkovich's is a study in effete, silky-tongued malevolence, dripping with danger, Eastwood's is as craggy as you'd expect, but sensitive with it, and not without a gentle sense of humour - light years away from the macho sardonism he peddled in those '60s and '70s vehicles.

There are a couple of minor flaws in the story: there should really be a scene with Eastwood and the family of a fallen comrade - without it he seems a touch selfish - and I'm not sure the climactic reveal, as exciting as it is, quite makes sense, though that's perhaps because I could spot a Malkovich literally anywhere. Such quibbling aside, it's a sensational film, and along with The Fugitive - for which Tommy Lee Jones beat Malkovich to an Oscar - perhaps the best popcorn flick of the '90s. Its action scenes are clever, well-paced and have a sense of genuine peril and purpose, but the film is also bracingly intelligent and unexpectedly thoughtful, with some fascinating, off-beam polemicising from its villain about Kennedy, John Wilkes Booth and the legitimacy of self-sacrifice, and a collection of real characters who behave in believable ways, at least in the context of a summer crowd-pleaser. These virtues, within an American blockbuster of the period, shimmer like an oasis in the desert, and it all goes to show what can be done when you take an unimpeachable idea, build on it cleverly, cast it perfectly and then hand over the reins to someone like Das Boot director Wolfgang Petersen, a filmmaker who knows when to be patient, when to inject a breathless urgency into the narrative and when to linger on a close-up of an old man nodding appreciatively at Rene Russo's bum. An Ennio Morricone score always helps too, of course. (4)

High Plains Drifter (Clint Eastwood, 1973) - High Plains Drifter is like an evil melding of High Noon, Shane and The Magnificent Seven, as a nameless gunslinger arrives in a mining town, where he's hired to protect the self-serving residents from three vengeful outlaws, only to prove something of a problem himself. It's a claustrophobic, brutal, brilliantly-directed Western - amazingly Clint's first behind the camera - with a powerful plot that's dusted with supernatural overtones and laced with unexpected, extremely funny comic touches. The opening sequence is a classic of the genre, Eastwood instantly drawing us in to this convincing Western world and borrowing from his mentor, Sergio Leone, as he builds tension through the repetition and steady escalation of everyday sounds: his horse's whimpering and heavy footsteps building to a deafening crescendo. There's also a fantastic shot in the first bar scene in which Eastwood slowly lifts his head, the brim of his hat rising to reveal the townsfolk nervously waiting to see what happens next.

The star's performance is superb, playing a laconic, sardonic anti-hero who shoots deadly straight (but can't paint a sign to save his life), and there are strong supporting characterisations from little person Billy Curtis (a veteran of The Terror of Tiny Town) and Verna Bloom, who brings sensitivity and a quiet authority to a cliched part that reminded me - in both role and execution - of Wendy Hiller's heroics in Outcast of the Islands. And while perhaps the intriguing story shows its hand a little too early, my only real complaint is that a subplot featuring Marianna Hill takes rape so shockingly lightly - going as far as to suggest that her character is enjoying the experience. There's an unfortunate thread running through these testosterone-heavy '60s and '70s Eastwood vehicles, too many of which belittle sexual assault and mine the subject of rape for misguided attempts at wry humour. Aside from the more troubling moral implications of feeding that message to an audience, it simply makes it nigh on impossible to side with Eastwood's anti-hero, no matters how many jars of sweets he gives to cute Native American kids (it's two, in case you were wondering). That issue aside, it's a very interesting, extremely entertaining film, brought to the screen with no small sense of skill, imagination and style. (3.5) 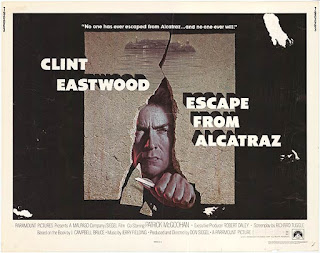 Escape from Alcatraz (Don Siegel, 1979) - An everyman con and multiple prison escapee (Clint Eastwood) is sent to the supposedly impregnable island prison of Alcatraz, where he bonds with some well-realised inmates, before plotting to vamoose alongside his nervy next-door neighbour and a couple of interchangeable ciphers.

It's a low-key, meticulously-detailed, often unbearably tense telling of a true story that benefits from solid performances and some virtuoso direction in its second half. But it's also slightly cliched, lacks the brutality and realism of The Big House (made almost 50 years before) and Siegel's Riot in Cell Block 11, and is at times just too confusing to work as effectively as it should. In a cleverly-conceived opening, we see the levels of security surrounding the prison, but it isn't always clear during the finale where the characters are and what obstacles they still have to overcome. If such disorientation were intentional and well-utilised, it could add to the suspense, but as it isn't, it sometimes detracts.

Fittingly, the acting from the central inmates is as solid as a rock, even when the stark process of dehumanisation that begins so promisingly loses much of its momentum. Yes, the prison's fascist clampbown on news from the outside and the lifeline of creativity is chilling, but that sense of danger and despair ebbs away as the movie progresses, replacing such heightened sadism with some unconvincing symbolism about a flower head. Far more effective is the simple explosion of colour that we see just outside the prison walls, that lush green flourishing of nature lying merely metres away from the bleached concrete that dominates the inmates' unforgiving daily lives, though it's never seen nor sensed. Some of these poor, put-upon souls probably do deserve to be inside, though, going by the law of averages, which isn't something that the film regards as even worthy of discussion, painting a black-and-white portrait of institutional cruelty that is neither complex enough to act as social commentary nor convincing enough to load its climax with the requisite dramatic charge, beyond the nauseating, stomach-tightening tension that comes with someone simply being somewhere they shouldn't be, doing something they shouldn't (the best comparison I can offer is when I was 10 and I kept a copy of the Daily Sport in a biscuit tin).

Eastwood's character is more of a people person than his usual angry mavericks, allowing for some effective, offbeat and understated moments of pathos, particularly opposite Paul Benjamin, the character actor who bequeathed that broken-down old shack to Peter Dinklage in The Station Agent. The star's unshowy turn forms part of a cohesive, complementary unit that just about manages to avoid being overturned by Patrick McGoohan and Bruce M Fischer's one-dimensional villains: one of whom wants to break Clint's spirit and the other of whom wants to brea- well, wants to become better acquainted with him. And his bottom. Danny Glover also turns up briefly, in his first film, to call Clint the n-word. They're all rather overshadowed, though, by an awesome little spaghetti-eating mouse who hangs around with a personable old lag, acting as his messenger, shower companion and confidante. I like Melvyn Douglas as much as the next man - probably a whole lot more - but let's just say he was lucky to get the Best Supporting Actor gong that year.

While Siegel and his screenwriters could undoubtedly have made the escape attempt a little clearer, the director does hit a dizzying pitch for those scenes, aided by Bruce Surtees' flashy (and flashing) cinematography - saturated with rich red light - and a clanging, discordant score by Jerry Fielding that mirrors its characters' nervousness and desperation, while playing on the endless chipping, booting and shuffling necessary to facilitate their departure. There's also a fantastic, bravura moment in which a screw's hand stretches out for the dummy in Eastwood's bed, and time stands still, before the film provides the mother of all reveals.

Escape from Alcatraz is no classic - neglecting to contextualise its characters' plight beyond stock situations, failing to capture the unrelentingly grim, intensely inhumane atmosphere inside the prison, and jeopardising the success of its titular set-piece through a slight muddiness of method - but it's decent entertainment, with some nice touches in both the matter-of-fact performances and Siegel's increasingly frenetic handling. (3) 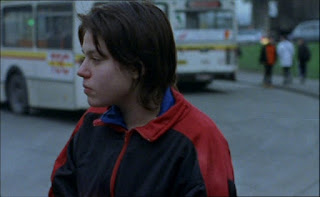 Rosetta (Jean-Pierre and Luc Dardenne, 1999) - This typically chucklesome romp from the Dardenne brothers concerns a cripplingly poor, emotionally combustible 16-year-old girl (Émilie Dequenne) striving to secure and then hold on to a permanent job, while looking out for her unspeaking, alcoholic, promiscuous mother. Rosetta makes friends with a waffle chef around her age, who sees past her fierce facade and allows a chink of light to shine into her life, only for her intense desperation to guttingly intervene. This largely plotless film may be excessively mundane, around half of it seemingly consisting of Dequenne taking her boots on and off, but it's blessed with an invigoratingly natural, unpretentious central performance - spotlighted by the Dardennes' fondness for handheld close-ups - has two absolutely unforgettable sequences set in and around a muddy lake, and ends in genuinely life-affirming fashion. Its emotional clarity and rich sense of character will endure in the heart and mind, long after the endless welly footage has faded from the memory. (3.5, as I like wellies)

See also: The Dardennes brothers' latest, The Kid with a Bike, is a masterpiece.

*may not be very special
Posted by Rick Burin at 13:04