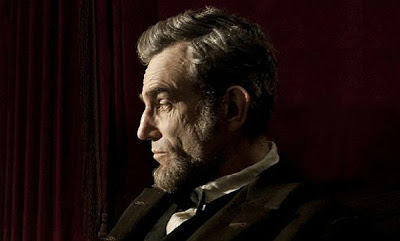 To shamelessly piggy-back on – sorry, "celebrate" – the release of Spielberg's Lincoln, I've compiled a maddeningly incomplete round-up of big-screen appearances by the only president you can imitate by taking some old hair off your hairbrush and holding it up to your chin with your thumb.

As anyone who's just been searching on IMDb knows, Honest Abe has appeared as a character in more than 300 movies and TV shows. He's been given the biopic treatment from three pivotal figures in cinema: noted racist and inventor of movies as we know them, D. W. Griffith, the greatest American director of them all, John Ford, and now the creator of the popcorn movie (and possibly popcorn itself), Steven Spielberg. He's fought vampires, been saved from assassination by John Kennedy and needlessly contravened the separation of powers just to please Shirley Temple. Here are some of the most memorable Lincolns on film (i.e. the ones I've seen).


Joseph Henabery in The Birth of a Nation (D. W. Griffith, 1915) – Griffith's hateful, bilious epic sees America overrun by scary black people after the assassination of Lincoln. It's morally repugnant but technically groundbreaking, while Henabery makes for an excellent Abe – he certainly wears more eye-shadow than any later incarnation. Griffith's first talkie was Abraham Lincoln, a biopic starring Walter Huston. 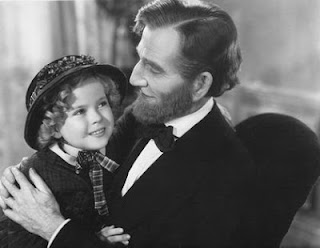 Frank McGlynn, Sr. in The Littlest Rebel (1935), The Prisoner of Shark Island (1936), The Plainsman (1936) and many others – McGlynn first played Lincoln on stage in 1919, toured in the part for two years, revisited the role for a short film in 1924 and featured as the president in a slew of '30s movies. The Littlest Rebel has him as an avuncular, folksy figure who loves kids and has time for everyone. Will he grant a last-minute reprieve to adorable curly top Shirley Temple's widowed father? If he doesn't, Depression-era audiences are probably going to be a bit miffed. John Ford presented Lincoln as an almost Christ-like figure throughout his work. In The Prisoner of Shark Island, which deals with the supposedly wrongful imprisonment of Dr Samuel Mudd - the physician who treated Lincoln's killer - McGlynn reprises his most famous role, getting a band to play Dixie, before a chilling, unforgettable and low-key restaging of the assassination that feels eerily like the real thing. He was miraculously reincarnated for Cecil B. De Mille's The Plainsman later the same year, kicking off that festival of questionable history in fine style.


John Carradine in Of Human Hearts (1938) – For those who found the Lincoln in The Littlest Rebel a bit too grittily realistic, here's John Carradine as The Great Emancipator, who has a few words to say to Jimmy Stewart about how he should be nicer to his mother. It's possible this may be a misuse of Lincoln's image. Let's see if the scene crops up in Spielberg's film too.


Henry Fonda in Young Mr Lincoln (1939) – Having featured Lincoln as a supporting character in his epic "coming of the railways" Western, The Iron Horse, John Ford gave him a film of his own: a peerless slice of Americana. Wearing the iffiest false nose this side of Looper – making him look a lot like Gary Neville – Fonda makes for a touching, funny and, well, young Mr Lincoln, who expounds much of his energy standing up for the little guy, but has an extraordinary predilection for laying down zingers. The star had expressed some reservations about being cast as the former president, saying it would be like playing Jesus, only for Ford to put him in his place. “You think Lincoln's The Great Emancipator?” he said derisively. “He's just a jack-legged lawyer from Springfield.” Written by Lamar Trotti – who'd penned a similar piece of legal-minded myth-making for the director, Judge Priest – this semi-fictionalised hymn to Ford's favourite president is overflowing with symbolism, humanism and subtle foreshadowing. It also contains arguably the most beautiful and moving scene of Ford's career, a wintry graveside chat, with Fonda bidding goodbye to his lost love. Simply put, it's by far the best Lincoln movie I've ever seen. 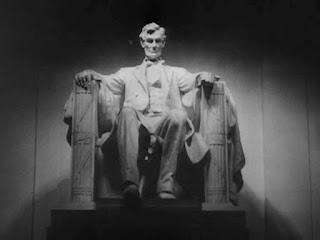 A giant piece of marble as the Lincoln Memorial in Mr Smith Goes to Washington (1939) – He's just a bit of marble. He doesn't even move. He's being back-projected in a Hollywood studio. But he inspires our hero. Sob. Since 1939, a succession of filmmakers have basically stolen Capra's idea, which is used when anyone is in Washington in a film and feeling a bit sad. A statue of Lincoln comes to life in Night at the Museum 2. The less said about that, the better.

Leslie Kimmell in The Tall Target (1951) – He wouldn't be so tall if he took off that sodding hat. Can Sgt John Kennedy (Dick Powell) prevent Lincoln being shot? For now, I suppose. 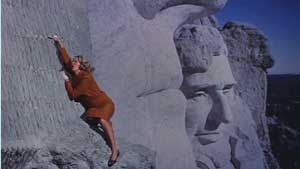 A massive stone carving of Lincoln's face in North by Northwest (1959) – Hitchcock's best film of the '50s (no, you are wrong) includes a terrific suspense sequence at Mount Rushmore. It's also worth mentioning that the crack squad of Team America are based inside the mountain and exit via Lincoln's mouth, which is frankly a brilliant touch. 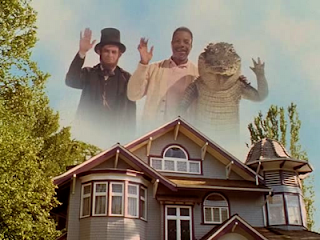 Charles L. Brame as Lincoln in Heaven in Happy Gilmore (1996) – If you ask me, this is where Lincoln officially sold out, looking down from Heaven to congratulate Adam Sandler's annoying golfer.

Tom Willett as the resurrected Lincoln in Kiss Kiss Bang Bang (2005) – Hurray - all the characters are alive again! And so's Abraham Lincoln!


Pete Antico as The Ghost of Abraham Lincoln in Black Dynamite (2009) – One of the more laboured non-sequiturs in this spotty spoof has Black Dynamite (Michael Jai White) aided by the ghost of Lincoln in a White House fight-to-the-death against President Nixon. Honest Abe karate-chops Tricky Dicky. 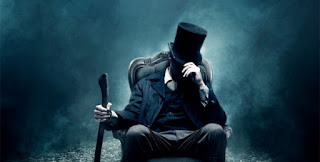 Benjamin Walker in Abraham Lincoln: Vampire Hunter (2011) – I saw a trailer for this. It looked a bit crap. 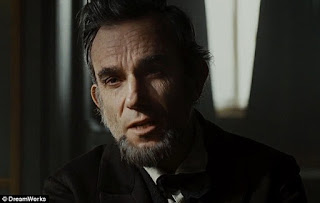 Daniel Day-Lewis in Lincoln (2012) – A faithful 90-minute biopic, followed by a superfluous hour in which Lincoln helps a child thwart his parents' divorce and then they send a homesick alien back to his folks. Probably.

I know I missed out Abe Lincoln in Illinois. That's because I'm watching it tomorrow. The actors who've appeared as Lincoln most often are, if you're interested, Frank McGlynn, Sr. (14), Benjamin Chapin (14), Ralph Ince (9), Francis Ford - John's brother - (8) and Raymond Massey (5). Thanks for reading. Let me know your favourite below. Ah, gwarn.
Posted by Rick Burin at 13:04