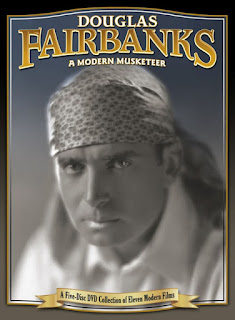 I've been steadily working my way through this year's largest extravagance, Flicker Alley's monumental box-set: Douglas Fairbanks - A Modern Musketeer, a purchase I could only justify by working both Jubilee bank holidays.

After being comprehensively wowed by When the Clouds Roll By and enjoying His Picture in the Papers, the tasteless, boring Flirting with Fate came as something of a nasty surprise. So how would the rest of the set shape up?

With two still to play (I've seen The Mark of Zorro before), it's looking like my unpatriotic (and possibly treasonous) decision not to celebrate the Queen's big day was one of the best decisions I ever made, just above buying Fletch, and just below giving away Fletch to a charity shop.

It's also worth mentioning that the restoration jobs on these films, as well as the tinting and the accompanying scores are absolutely wondrous, and there are a few fun extras peppered about the discs (though nothing to rival the wealth of material, including deleted scenes (!), on the Fairbanks swashbucklers set). Hats off to Flicker Alley for that. 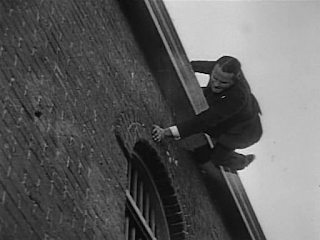 The Matrimaniac (Paul Powell, 1916) – An uninspiring early Fairbanks vehicle predicated on a knowledge of anti-elopement laws of the 1910s that most of us simply don’t possess. There are a few good gags and stunts dotted about the place (a mule that runs backwards and climbs on people’s backs, Doug riding under a train), but it’s largely dull and not in the same league as His Picture in the Papers and When the Clouds Roll By – or even close. (2) 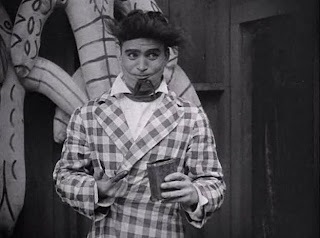 SHORT: The Mystery of the Leaping Fish (John Emerson, 1916) - A notorious, nightmarish Sherlock Holmes spoof, devised by Freaks director Tod Browning, about detective Coke Ennyday (a preposterously hammy Fairbanks), who wears a chequered suit and hat, drives a chequered car, and keeps injecting cocaine into his hand. By way of a climax, our hero forces the baddies to take drugs, and comes out on top because he has a higher tolerance for opiates. The film is no classic - even at 26 minutes it has several dry stretches, Doug hated it and there's little of his famous persona on show - but the gags with the compactible telescope, the room full of money and the photo of the suspect are clever, the coda is a little post-modern gem, and the film's matchlessly irreverent approach to Class A drugs unquestionably makes it a fascinating curio. Does anyone else think his hopped-up jittering is also quite Chaplinesque? (2.5) 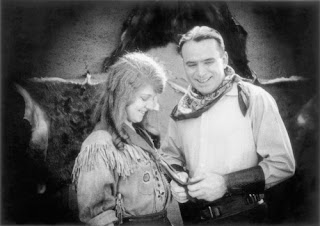 Wild and Woolly (John Emerson, 1917) – A very fun Western send-up, written by Anita Loos, in which urbanite, railroad president’s son and complete moron Douglas Fairbanks gets to indulge his unrestrained passion for the wild and woolly West after being sent to Arizona to broker a deal. The inventive plot – which sees the villagers giving the visitor exactly what he wants to see – has been used countless times since (Local Hero, The MatchMaker, Seducing Dr Lewis), Doug is in exuberant form, and the action climax delivers, without quite scaling the heights (quite literally) of Fairbanks’s period classics. Charles Stevens, who appears as Pedro, was one of Doug’s best friends and appeared in many of his films, but is perhaps best known for playing Indian Joe in My Darling Clementine – and being the grandson of the famed Native American warrior, Geronimo. (3) 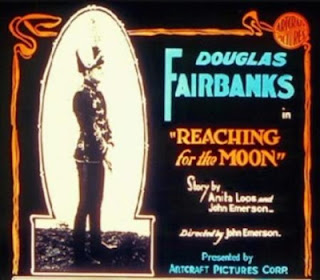 *MINOR SPOILERS*
Reaching for the Moon (John Emerson, 1917) – Hopeless dreamer – and button factory worker – Douglas Fairbanks finally gets the chance to amount to something, after it turns out that he’s the new ruler of Baltic nation Vulgaria. The only trouble: a cabal of rivals now want him dead. This slightly confusing comedy was clearly designed to try out Doug’s now famous swashbuckling persona on audiences, thrusting the star into a world of pageantry (which at this stage he treats with the amusing, dismissive air of a 1910s New Yorker), and giving him the chance to fight up and down a staircase and engage in a swordfight. And while it's never quite as slick, funny or exciting as it should be – and some of the comic set-pieces fall flat – its moral is very sweet, and there’s plenty to enjoy in the star’s unusually sarcastic performance. Doug appeared in an unrelated talkie of the same name in 1930. (2.5) 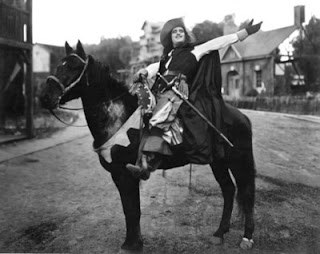 *MINOR SPOILERS*
A Modern Musketeer (Allan Dwan, 1917) – Fairbanks’ first collaboration with Dwan – who would direct the star in two of his finest, most lushly romantic swashbucklers, Robin Hood and The Iron Mask – is a strange, important and really rather wonderful adventure movie. Doug is a modern-day D’Artagnan, born during a cyclone and raised on Dumas’s stories, who devotes his energies to rescuing damsels in distress. When a pretty, virginal flapper (Marjorie Daw – not the same as Marjorie Dawes) is taken riding by a moneyed bigamist, then kidnapped by a Native American psychopath, it’s up to Doug to muscle in and win the hand of fair lady. Beginning with an awesome, spoofy, action-packed period prologue with Doug as D’Artagnan, designed to position its star as a potential swashbuckler should audiences go for it (which they unreservedly did), and proceeding to leap forward and back in time at will, it’s both narratively original and tonally bonkers – but completely charming with it – tossing elements of slapstick, satire and melodrama into the mix, before turning into a Western for the last half-hour. If the movie has a shortcoming, it’s that the anticipated action spectacular of the climax never quite arrives – the finale seems oddly slow and disjointed, despite a neat abseiling stunt and a chase on horseback – but it’s a relatively slight shortcoming in a delightful film that manages to cram in two superb bar brawls, a touching romance and even a visit to the Grand Canyon. The Flicker Alley release also comes with a stunningly beautiful score. (3.5)
Posted by Rick Burin at 13:18