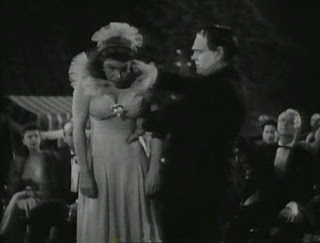 *SPOILERS FOR CITIZEN KANE*
Hellzapoppin' (H.C. Potter, 1941) - This screen translation of the biggest Broadway hit of the '30s mocks Hollywood convention, then bows to it anyway, burdening the gag-heavy script with a needless romantic strand and going overboard with the musical interludes. Which is a pity, since the opening 15 minutes are perhaps the most joyously anarchic in Golden Age comedy - truly the free-for-all promised in the title song, where "anything can happen and it probably will". We begin with a snatch of a glossy production number, before a lever is pulled and the glamorous chorines are cast down a water slide and into Hell. As these lost souls are prodded up the bum with tridents (the pointy things beloved of demons, not the submarine-based nuclear deterrents), our stars pull up in a taxi. "That’s the first taxi driver who went strictly where I told him to go," Chic Johnson laments. The driver gets out. He is a midget. Johnson shoots the taxi with a blunderbuss, then asks the projectionist to run back the film. He does. Johnson shoots the taxi again, at which point it turns into a horse and the cabbie rides away. Enjoying it so far? Good.

We pull back and we're in a film studio, the quips flying thick and fast as Johnson and Ole Olsen bicker with 'director' Richard Lane and meek screenwriter Elisha Cook, Jr. about the direction their movie should take. As they walk from set to set, their costumes changing seamlessly, there's a deliriously silly photography gag, followed by one about Citizen Kane ("I thought they burned that thing," Johnson mutters, looking at a sledge). Watching clips from the picture Lane is pitching to them, the stars initially offer their own commentary, before arriving in the film-within-a-film. It's at that point that the interest-free plot kicks in - a tedious love triangle - and the laugh-rate slows, despite the best efforts of Martha Raye and Mischa Auer. That's not to say there isn't still plenty to enjoy - the 'Stinky Miller' segment, in which the cast implore a member of the audience to go home to his mother, the staggering Lindy Hop dance sequence, an old man repeatedly trying to deliver a tree - just that there's generally a couple of duff jokes for every inspired diversion, and more than that during the putting-on-a-show climax. The bear's funny, though. And Frankenstein's Monster. All in all, Hellzapoppin' isn't consistent or self-confident enough to match peak Marx Bros fare like Duck Soup or A Night at the Opera, but it's admirably off-the-wall, with a delightful distaste for the fourth wall and much else to revel in despite the faint feeling of an opportunity missed. (3)
Posted by Rick Burin at 14:56