Sometimes I wonder if I may have seen all the good films. I know they keep on making new ones but they're either Marvel or Zama and Roma, and I mean, come on. I wonder too about the value of a movie list with the same 'best film of the year' as the Oscars, and Pan's Labyrinthh in its Deep Cuts folder, and yet here we are. Hopefully you'll learn something, but it may only be one thing.

I spent January and February watching and re-watching Orson Welles films (and then trailers and then TV episodes; I went far down the Welles Hole). If that's of interest, you can catch up here.

It wasn't the most thrilling year (I'm really scrabbling around for a #10 tbh), but we got there. Five classics, four imperfect knock-out blows and one relic of last year's film festival that for all its flaws had a certain something. 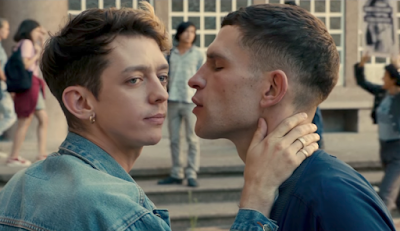 10. BPM (Director: Robin Campillo) – At its best, this confrontational, unsentimental but humanistic film has unexpected echoes of Melville's Army in the Shadows, which looked at action, division and necessity within the French Resistance, and I understand why it included so many sequences of illness and fucking, but those elements don't seem as interesting as the story it started to tell. When it returns to it in those final moments, loaded with the suffering and sadness of what's gone before, the results are admittedly astounding. Full review. 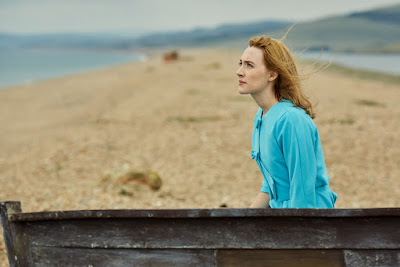 9. On Chesil Beach (Dominic Cooke) – For almost its entire length, this adaptation of Ian McEwan's 2007 novella is close to perfect: the beautifully-modulated, restrained story of a strait-laced couple in the still strait-laced early '60s who look back on their often idyllic courtship from the claustrophobic environs of their honeymoon suite. If only they'd ended it there. Full review.

8. I, Tonya (Craig Gillespie) – A dynamic, polemical retelling of a story that’s always fascinated me. The film’s great gamble is the blackly comic tone, and it works superbly, while never blunting the story’s harrowing edge. It’s only in the caper-ish, somewhat longwinded treatment leading up to the pivotal ‘incident’ that the movie errs, before kicking in hard again at the end. Who knew that Steven Rogers, the writer of weak, mawkish rom-coms, had this in his locker?! As everyone has said, Robbie is terrific, while the sequences on the ice are genuinely dazzling. 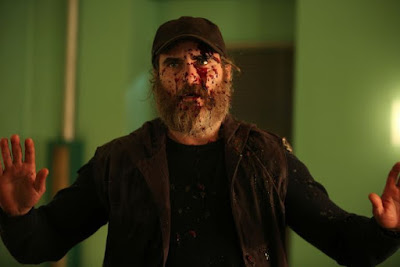 7. You Were Never Really Here (Lynne Ramsay) – Well what did you think a Lynne Ramsay noir with Joaquin Phoenix as a hitman would be like? Ramsay can write great dialogue, but with a Hitchcockian desire to tell stories using just pictures, that visual imagination – CCTV action sequence ftw! – and her matchless ear for apposite pop music, she rarely needs it. Full review. 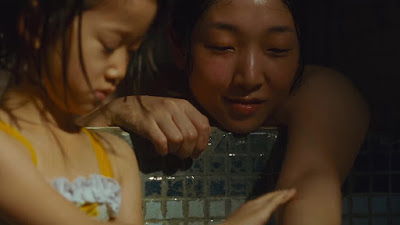 6. Shoplifters (Hirokazu Kore-eda) – An almighty assault on the emotions in the tradition of Bicycle Thieves and Forbidden Games, though its inevitability is cloaked in surprises – and charm. Beautifully observed and filmed in the most extraordinarily tactile manner, with fine performances all round; Lily Franky is astonishingly good.

5. A Star Is Born (Bradley Cooper) – The best version of this story for 64 years. There’s the odd wrong note in the script – you could write books on its sexual politics and rock v pop posturing, not all of them positive – but it’s still something special, thrumming with emotional charge, crackling with chemistry. More here. 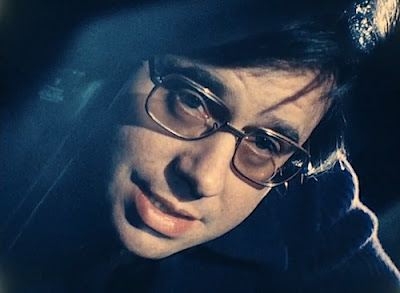 3. The Other Side of the Wind (Orson Welles) – The first new Orson Welles film for 40 years, which was something I could look forward to for 10 months of 2018. And when it arrived, in a blur of bad Twitter takes about authorship and misogny, it truly delivered: as a maddening, daring, relentless, repetitive, often dazzling examination of creativity, cinematic artifice and Welles himself. Not just the director's self-destructiveness, myth-making and Falstaffian relationship with protégé Peter Bogdanovich (playing a barely fictionalised version of himself), but also the conflicts raging within him: his outsider posturing but need to belong, a buried tendency towards homoeroticism, the battle between art and commerce (at a time when art was becoming commerce, and vice versa) that had sunk him back in 1942. All of that filmed across six years, much of it in a Hollywood mansion peopled by the wizened faces of his old stock company and the directors that had usurped the old order. The passages that Welles edited himself – including the best sex scene ever put on celluloid – are utterly dazzling; despite the remarkable work done in completing the film, pure genius has a way of standing out. 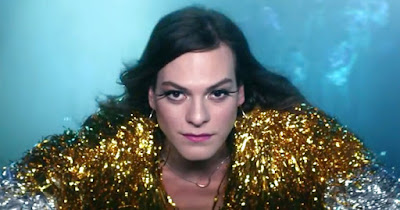 2. A Fantastic Woman (Sebastián Lelio) – Vega has the most fascinating face and the camera makes the most of it, not least in a dazzling nightclub sequence that moves from pain to sensuality to a fantasy dance number, but there's such depth to her characterisation too, and the film's refusal to give her easy, sassy victories is uniquely satisfying, grappling profoundly and humanely with issues that are both specific and universal. Full review. 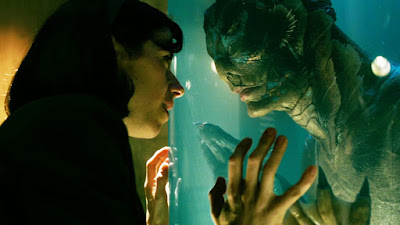 1. The Shape of Water (Guillermo del Toro) – A sci-fi, a horror, a monster movie, a romance, a Cold War thriller, and a history lesson about Alice Faye: this genre-bender is many things, but above all it's an emotional experience, a clear-sighted, glowing-hearted picture with some of the most beautiful imagery and a performance I'm going to be rhapsodising about for weeks, months, years. Full review.

... being the best old things I hadn't seen before this year. 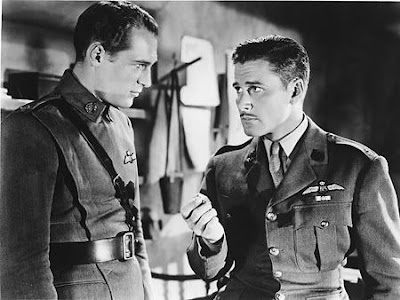 The Dawn Patrol (Edmund Goulding, 1938) – My pick of the year, an unexpectedly terrific anti-war film (though its polemicising isn’t perfect), about WWI flyers facing impossible odds – and for what? Niven, Rathbone and Crisp are all excellent in this understated, intensely moving movie, though it’s Flynn who leaves the greatest impression, as a carousing but stiff-upper-lipped flyboy suddenly shackled by responsibility, and flirting with despair. He was never better. Only complaint: almost all the action and even several scenes of dialogue are lifted from Howard Hawks’ 1930 original. Perhaps only Capra’s Riding High ever recycled footage so flagrantly/stingily. 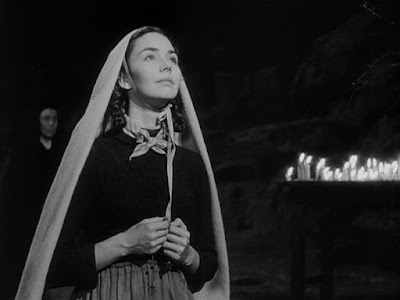 The Song of Bernadette (Henry King, 1943) – A beautiful film about Bernadette of Lourdes – from back when Fox doing religion meant faith, gentleness and visual poetry, not private healthcare, intolerance and assault rifles. Full review.

Pan's Labyrinth (Guillermo del Toro, 2006) – Magical Del Toro film, in the tradition of Spirit of the Beehive and El Sur, about a young Spanish girl (Ivana Baqueiro) negotiating the horrors of war by passing into a fantasy world. Lyrical, moving and humanistic – but also shockingly and viscerally violent, existing almost entirely in the chilling real world, with mere doses of escapism. The director revisited many of its themes and touch points in The Shape of Water (see above), another haunting, beautiful movie about the collision between innocence and brutality. 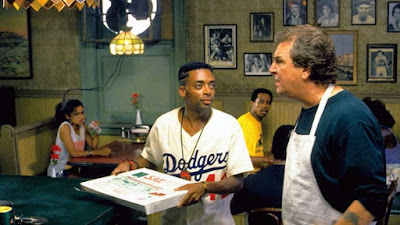 Do the Right Thing (Spike Lee, 1989) – So cinematic. A white-hot Lee polemic, masquerading (at first) as a slice-of-life drama. It nods to Night of the Hunter and Welles’ The Trial, but it’s conspicuously in communion with its times, and the unwanted touchstones of the contemporary African-American experience, Tawana Brawley to Howard Beach. Full of humanity, anger and pizza. My subsequent adventures in Lee have been mixed: I loved She's Gotta Have It, in all its scuzzy imperfection, until its hero sexually assaulted his ex-girlfriend and we were supposed to cheer along.

Best of Enemies (Robert Morgan and Gordon Neville, 2015) – A superb doc about the 1968 TV debates between influential Conservative commentator William F. Buckley and his arch nemesis (at least at this time), flamboyantly gay, left-leaning novelist Gore Vidal. It's brilliantly put together, though what makes it most thrilling is simply the raw footage of two intellectual behemoths going at it hammer and tongs. For all you want Vidal to triumph, Buckley is often on top, though watching Vidal needle someone until they explode is my new favourite spectator sport... and the pay-off is unforgettable. I've since read two books about Buckley and none about Vidal, so who's the real winner? The Power and the Glory (William K. Howard, 1933) – Terrific Preston Sturges script about a working class industrialist (Spencer Tracy) whose controversial personal and professional lives are revealed in flashback. This one’s often cited as a key inspiration on Citizen Kane, but in truth, the similarities are fairly superficial. It’s a superb movie on its own terms, though, with a maturity, complexity and lack of moral judgement that’s really refreshing, and a panache in the storytelling that’s way ahead of its time, its human secrets gradually revealed, and the individual scenes imaginatively devised. Tracy is excellent. Slightly longer review. 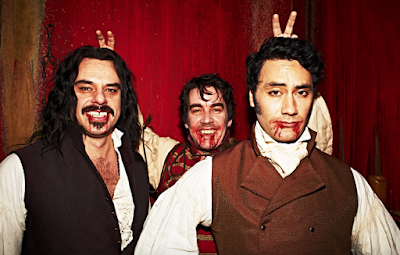 What We Do in the Shadows (Taika Waititi, 2014) – Disarmingly funny and original. This mockumentary about vampires (and werewolves) is full of well-sketched characters, and opens up its story in intelligent ways, but beyond all that it just made me laugh a lot.

Piccadilly (E. A. Dupont, 1929) – Pictorially striking silent, set in the clubs, dives and slums of London, with an electrifying performance from Anna May Wong as a sultry Chinese dancer whose moves make men knife each other. Director Dupont seems more interested in character and atmosphere than the thin, ultimately melodramatic story, and I’m with him, though the elements touching on race are quite interesting. Try to see Piccadilly with Neil Brand’s infectious jazz score if you can, music that matches the film’s energy, cynicism and modernity. 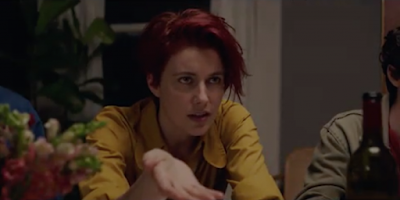 20th Century Women (Mike Mills, 2016) – They’re saying ‘menstruation’ wrong. But this film about women, written by a man, directed by a man, starring a boy, is insightful and interesting and only occasionally very irritating. As usual, Greta Gerwig is much better than everybody else, even when dealing with some of Mills' heaviest indie affectations.

Lola Montès (Max Ophüls, 1955) (Cinema) – Everything Ophüls does to tell this story works, even if the story itself doesn’t. If you get the chance to see it on the big screen: leap. Otherwise, perhaps leave it, as without its grandiose visual sumptuousness there's not an enormous amount to embrace.

Jack Nicholson during those halcyon days (1969-74) when he did some acting.

Carnal Knowledge (Mike Nichols, 1971) – A fascinating, distinctive New Hollywood film about sex, self and the death of love, which is steeped in macho despair, as well as a horror at what it reaps. Everyone in the film is great, though having Jack Nicholson (34) and Art Garfunkel (30) play the 18-year-old versions of their characters, nervous about touching a boob, does take a little getting used to. Written by Pulitzer Prize-winning cartoonist, Jules Feiffer, it’s probably not for everyone – talky, weirdly-paced, and as much about its characters as their times – but I found it really interesting: one of those movies that you fear might add up to nothing, then find yourself chewing over for days.

The Holly and the Ivy (George More O'Ferrall, 1952) – A literate British ensemble drama with a great cast; a little stagy and cheap-looking, but exhibiting considerable compensations. It’s the story of a family regathering in a Norfolk village at Christmas. They are Irish parson Ralph Richardson, his children – a damaged fashion journalist (Margaret Leighton), an aimless soldier (Denholm Elliott) and the live-in daughter who wants to spread her wings (Celia Johnson) – a couple of grandparents and a godfather. Over Christmas they’ll quietly tear one another apart and be born anew, so it’s hardly festive fluff, but it’s all the better for that. Full review.

I kept it short and sweet this year. Like I say, the books blog is generally the best one, but hopefully you found something halfway decent that you can watch in 2019. Thanks for reading.
Posted by Rick Burin at 15:38