REVIEW: Hamlet at the Almeida Theatre 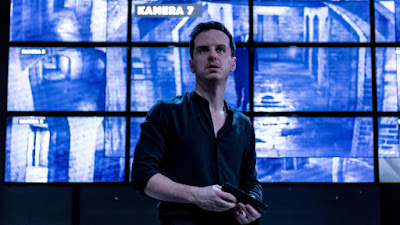 Andrew Scott's Hamlet is the best I've seen − probing, philosophical, introspective and bitterly witty − and this intimate, innovative, cleanly modern production rises to meet him, keeping your attention rapt and your emotions engaged.

Scott's emotions are always just below the surface. He doesn't cry on command, as such, that suggests a gimmicky or insincerity. He cries easily, his performance here studded with tears, dripping down that taut, gaunt, pouting face as the veins stand out in his neck. Those tears of rage, self-loathing and simple sorrow are where you go when you've run out of words. For Bob Dylan, that place was always a harmonica blast, and Dylan's the only soundtrack we get here: One More Cup of Coffee commenting on mortality, Spirit on the Water signifying a party, Don't Think Twice… subtly mocking the prevaricating Prince, and Not Dark Yet striking up as the end approaches. Am I wrong in thinking that the coda slyly winks at another track from Dylan's Time Out of Mind, as Claudius tries to get to Heaven, before they close the door.

Where the Barbican's production with Cumberbatch in the lead was flaccid, distant and long-winded, the Almeida's takes place in your lap, feels pared down to its essentials − old and newly discovered − and in its music, projections and manners feels like a Hamlet for this cynical century, its protagonist pained, tired and wired, a gentle, melancholy man wrestling endlessly with his burden, every nuance intriguing and every line seeming to be thoughts that are just occurring to him now. For the first time, I felt I was watching a Hamlet who seemed to be discovering the story as we were, lessening the play's fatalistic foreboding and making it a personal human drama, not a grand, portentous charade.

At times, Cumberbatch tried buffoonish, crowd-pleasing comedy, prancing around in a toy soldier's hat. Scott's Hamlet is nimble, knowing and drily funny, his sarcastic barbs all the funnier because he's so thoughtful, and so thoughtfully self-critical. When he's consumed by anger, it's not theatrical grandstanding, it comes from deep within, from unease that's revealed as insight, and a faltering self-knowledge that explodes into epiphany. Here, what was literal in Shakespeare shadows the psychological forces buffeting the hero: Hamlet is cast on a boat towards England, as his soul is tossed on roiling waters; his father appears thrice as a spirit, as the looming spectre of betrayal stalks our hero. And he is a Hamlet systematically if not always wittingly betrayed: by his murderous step-father, by his incestuous mother (Juliet Stevenson), by the former schoolfriends of the Prince whom they effortlessly seduce to their side, by the chummily meddling, foolish Polonius, and by Ophelia (Jessica Brown-Findlay), who seeks to help her father resolve Hamlet's loss of mirth, and instead drives both of them towards insanity. 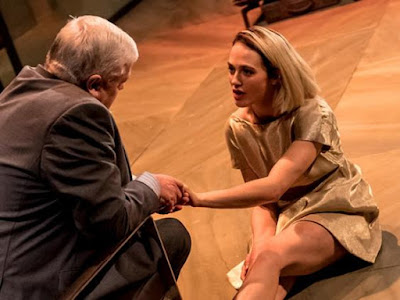 Jessica Brown-Findlay as an affecting Ophelia, with Peter Wight her foolish father, Polonius.

The stage is just three stubby, fat steps up from the stalls: we may as well be in a living-room. In fact, we are, or at least in Elsinore's coldly comfortable quarters, coolly-coloured IKEA-like furniture close to the faux-marble floor that doubles as a CCTV headquarters, a hall and a graveyard. The use of video screens (one large and temporary, a smaller one at either side) feels unusually seamless and natural: occasional footage from a sort of Danish Sky News updating us on funerals, battles and the like, and − when the cast sit with the audience to watch the pivotal play-within-a-play − showing Claudius's reaction to Hamlet's incendiary self-penned script. After the first interval, the screen is unpaused, then exquisitely 'malfunctions' as Claudius enters, spewing out close-ups of his guiltily contorting face. 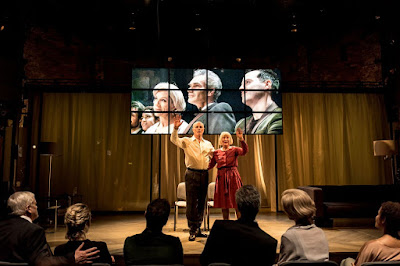 The players scenes, mercilessly and mercifully pruned to perhaps three-dozen lines (and complete with Scott's parody of declamatory acting), are illustrative of a brilliant reshaping of the text. Robert Icke's production uses modern dress and is tooled specifically for modern tastes, zeroing in on the characters' emotions, their inner conflicts and their reasons for those conflicts, and junking everything that's long-winded, extraneous or a bit stupid. It retains enough of the players to accentuate some of Shakespeare's commentary on the truthful artifice of theatre − in Scott's hands, a pithy, meta thing − to energise its hesitant hero, and to cast light on those who surround him, and that's it. Here, Hamlet's 12 lines inserted into the action to gauge his stepfather's reaction are not a threat or a test of Claudius's temperament, but solely for the prince to ascertain the suspect's guilt, or to offer His Uncertainness a way out. I'm not sure if that's always the case. If it is, then I can only say that I typically find this sequence so boring that I've never been engaged enough to realise it. And while the idea of a ghost telling his son that someone poured poison in his ear is going to be ridiculous to me until the day I die, this production is so swift in dispensing with exposition that the play's other improbabilities become part of a credible, compelling whole. 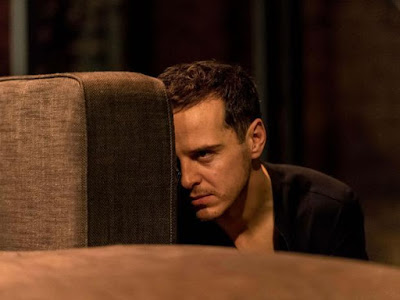 Scott's Hamlet is the first to whom I've felt a natural and personal connection, and it runs deep. He's groping in the dark, beset with an impotence of action from which he's trying to rip himself free, questing for self-knowledge, while praying for a relief from it. He's an existential Hamlet: thoughtful, melancholy, feeling deeply, a decent, anguished, emotionally tender Prince with an adolescent's loathing of hypocrisy and duplicity, a child's guilelessness, and a self-loathing born of immobility in the face of dishonour. In pegged black trousers and a collarless shirt, barefoot or in shiny black shoes, stripped to a vest highlighting his voluminous biceps, or dressed in cream and white for the graveyard scene, the wiry, wild-eyed Scott commands the stage, and all of your attention.

Occasionally he ventures forth with his finger and thumb in an 'O', reclaiming the gesture from Donald Trump, and putting it into the service of poetic precision as he wonders at what a piece of work a man is. He blasts his arms skywards, showering the stage with spit as he finally shakes off the shackles of inaction. And he toys slyly with Polonius, outfoxing him amiably as the darkness sets in around Hamlet's heart. Elsewhere he is fleet of foot, touchingly tentative and uncertain ("To be… or… not to be) or sardonic, turning the Dane's usual contemplation of mortality after the revelation of Yorick's skull into something more offhand, spiky and yet strangely affecting, the dust pouring from the eye-sockets as he at first calls with an amazed amusement: "Alas, poor Yorick...", then muses: "Here hung those lips that I have kissed I know not how oft. Where be your gibes now? Your gambols? Your songs? Your flashes of merriment, that were wont to set the table on a roar?" Its nostalgia for childhood for once outweighs its macabre portents, which chimes beautifully with this innocent Hamlet who seems not to know what awaits him. The spontaneity of the delivery, the lightness of touch, and the play's scope but specificity of humour seem to all play into it, and so do the other performances. 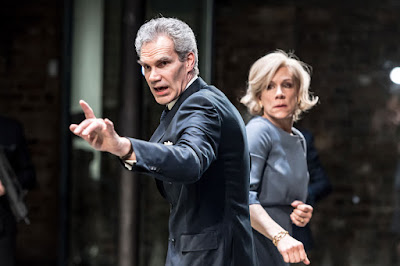 Peter Wight's meddlesome Polonius is unusually likeable and doltish, Luke Thompson is a spirited, dangerous but noble Laertes, and Juliet Stevenson plays Gertrude as lustful, naïve and protective, and while a couple of her actorly tricks were a little synthetic for my taste at close quarters, she does a better job than anyone I've seen of resolving the character's apparent inconsistencies, of being vain and blinkered while still "living almost by [Hamlet's] looks", and taking a bullet for her son, for all the good it does him. Jessica Brown-Findlay is a fine Ophelia too: appealingly playful, sexy and normal in the opening scenes, her sense of fun not equating to triviality, and her growing vulnerability constrained within a real character. When Ophelia does fall to pieces, a transformation intelligently rendered in stagecraft and performance, she plays mental illness credibly and compellingly, without patronising ethereality or runaway artificiality, but seriously, properly, weightily, singing a Laura Marling melody, flaring into rage, then greeting Laertes with an erotic tenderness, before dissipating into despondency. When her death comes, it's without predetermination or fanfare: all keeping with a production that thinks you haven't seen this before, because it's never happened before. Polonius's violent death too is a sudden, bloody shock that hits you hard because of its ear-splitting ferocity and because a dull-witted but good-meaning father whom we were beginning to like is dead, and not simply because Hamlet has just incinerated every bridge in sight.

Hamlet is closing at the Almeida as I write this, but it's bound for the West End later this year, and I'd urge you to see it if you can afford to. It's 195 minutes long, but it's vivid and enthralling, and consistent too, not lagging when Hamlet is off stage, as other productions do. I'd recommend it to anyone who loves Shakespeare, but I'd recommend it even more strongly to those who don't, because it filters his work unerringly through a modern sensibility, stripping away the redundant and finding resonances with the world in 2017. Like Elsinore, it's a lonely place, ruled by murderous liars, but if thou can be true to thine own self, you're halfway there. The rest you try to fill with self-knowledge, personal philosophy, friends and art.

Thanks for reading.
Posted by Rick Burin at 22:26