Your are more than welcome. 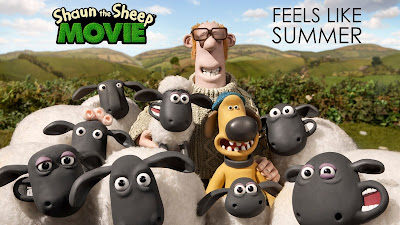 Shaun the Sheep Movie (Mark Burton and Richard Starzack, 2015) – This is all rather lovely: a feature-length adventure for Shaun the Sheep that takes out hero to the medium-sized city and completes a trinity of really strong Aardman features, following Arthur Christmas and The Pirates. If it bucks the five-strong trend of every movie from the studio being better than the last, lacking the distinctive characters and clever dialogue of those two fine films (and featuring a thoroughly predictable, one-note villain), it emerges as something different: a spiritual successor to the silent comedies of Buster Keaton and Harold Lloyd, full of rich visual humour, imaginative thrill comedy and a little well-judged sentiment.

I find it disorientating to watch human characters who can’t speak except in vague noises (like The Sims, it makes me feel like I have dysprosody), the “oh you” mannerism utilised a full three times seems weirdly broad and old-fashioned for a movie this neat and sharp, and the film takes a good 20 minutes to get going, but once it does it’s a lot of fun, replete with clever sight gags, unexpected twists and deft swipes at everything from deux ex machinas to the shallowness of celebrity culture. It also has a breezy, summery theme tune from Ash’s Tim Wheeler.

My favourite jokes are the sheep who pretends to be human by attaching a sweeping brush to his face (I laughed out loud every time I saw him), and the psychotically-staring dog in the animal-control centre.

Having said all this, I'm not sure if being put in some poo is a serious enough punishment for attempted murder. (3)

Embrace of the Serpent (Ciro Guerra, 2015) – Apocalypse Now for hipsters.

This ethnographic arthouse film is enthralling at times, but disengaging at others, as two white men – decades apart – are taken up the river by Amazonian shaman, Karamakate, in search of the miraculous, health-giving plant, yakruna. This causes problems. Yakruna problems. "Yakruna matata”.

The mid-section is superb, its marriage of luscious monochrome cinematography (reminiscent of Louisiana Story and Jarmusch’s Dead Man) with colonial comment, deadpan humour and rich, deeply-rooted characterisation washing over you, saturating you with its quiet anger, shimmering beauty and resolute complexity. But Embrace of the Serpent’s trailer promised something greater than this film, which takes an age to navigate its slow, talky and boring opening stretches, and traverses into redundant hedonism after peaking in the instant that a boat cruises past the crumbling sign of a Catholic mission.

It's wonderful to see a film doing something new, and exposing us to a world and culture we've rarely encountered, but that doesn't just give it a free pass. Its fitful glories, including an obvious but nonetheless stunning and mindbending final act (A Field in England on Amazonian acid), aren’t enough to cover for a film that meanders endlessly or hits you at full force, when it should be following a steady course.

That bit where the young Karamakate is teasing Theo for crying made me laugh so hard, though. (2.5) 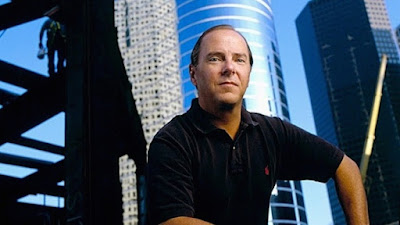 It’s an extraordinary story well-told through the use of previously secret documents and tapes, archive news footage and the usual talking heads, and though it suffers a little from triviality and gimmickry when leaning on found footage and music (Tom Waits, though!) and has no after-the-collapse interviews with the principal villains, the characterisation is superb, while it lays bare the moral bankruptcy of corporate America, and the dereliction of duty that is free market idolatry.

If I’d seen it at the time, I could have warned you about the recession. Sorry. (3) 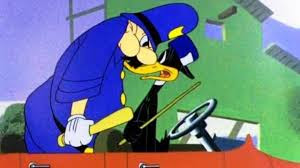 SHORT: Hollywood Daffy (Friz Freleng, 1946) – Though there are a few fantastic Daffy Duck cartoons – like the legendary, post-modern Duck Amuck and the concurrent "Hunter's trilogy" – they're almost all made by Chuck Jones. And while the story here came from the same writer as those classics, Michael Maltese, and Hollywood Daffy was directed by influential animator Friz Freleng (himself famously the irascible inspiration for Yosemite Sam), it's sadly rubbish: an abrasive, unfunny and barely-drawn piece of nothing about Daffy attempting to become a Hollywood big-shot but being sidetracked by a rivalry with a studio security guard. Some of the references are faintly fun if you're interested in the period, but I didn't smile once, and the drawings of Bette Davis and Johnny Weissmuller are terrible. (1)

All This, and Heaven Too (Anatole Litvak, 1940) – An exceptionally classy melodrama, with Bette Davis giving one of her most extraordinary performances as a silhouette of a woman who enters the Duc de Praslin's tempestuous household in Paris of 1848 to act as the governess, falling in love with her master and becoming beloved of his children, before incurring the formidable wrath of his jealous, unstable wife.

It's a beautifully balanced and restrained performance, with the star often saying one thing and playing three more, her heroine having to keep her emotions in check, know her place in society and her household, and juggle the conflicting responsibilities to her employers, her charges and herself. She's a character rarely permitted to speak honestly, but yet at every instant we know what she's thinking. All the while, she's plagued by the circumstances of her early years − the script expertly drip-feeding information and motivation − while the framing device, with the older Davis justifying herself to a classroom of malicious teenage girls, tells us that it's unlikely to end cheerily.

As with many prestige pictures of the era set in foreign countries in previous centuries, a conceited, and at times complacent attitude prevails that undermines the film's aspirations to art: a distracting muddle of accents, the odd duff supporting performance (I'm quite fond of Harry Davenport, but he's pure am-dram here) and concessions to Hollywood hokum that that are superficially satisfying but detract from the wider film.

There are other elements, though, that would confound those who regard Hollywood studio product of the '30s and '40s as trite or silly or shallow, including Max Steiner's sweeping score, and artful cinematography from Ernest Haller, who began as assistant to D. W. Griffith's favoured cameraman, Billy Bitzer, and shot the likes of Gone with the Wind, Mildred Pierce and Rebel without a Cause, as well as several signature Davis vehicles.

The collision of art and artifice is rarely more profound than in the ballroom sequence, where he shoots twirling couples − complicit in the filthy hypocrisy of aristocratic life − in the mirrors behind three innocent children. That Ambersons-ish brilliance is in sharp contrast to the kids' conversation and characterisation: as much as I love Virginia Weidler et al, having modern American children enact these parts, spouting Hollywoodised exposition spoils the effect of the scene. Elsewhere, he brings a timeless freshness to his compositions (waves lapping upon the camera to slosh us into the flashback) while staying true to the glossy, idealised glamour of peak-era Hollywood.

Though I've catalogued its shortcomings, Casey Robinson's screenplay is mostly quite poetic and thoughtful, and if the film barely bothers to articulate the greater stakes beyond the compelling central story (which is only trivial if you believe that love and death are trivial when practised in a wealthy home), its slow-burning storyline is touching, immersive and intelligently handled. It's also broadly true, the source novel having been written by Rachel Field, the great-niece of Davis's Henriette Desportes.

Alongside Davis, Barbara O'Neil is an adequate if somewhat one-note villain, Charles Boyer does a fair job as the brooding Duke, and there are pleasant supporting turns from June Lockhart, Virginia Weidler and Ann E. Todd as the kids (they're joined by little Richard Nichols, who's too young to be able to act, but is really cute), within the restrictions of Hollywood convention.

But it's Bette's show: aside from All About Eve, this might be my favourite of her performances: another distinct, vivid and compelling character to add to a seemingly endless gallery. (3.5) 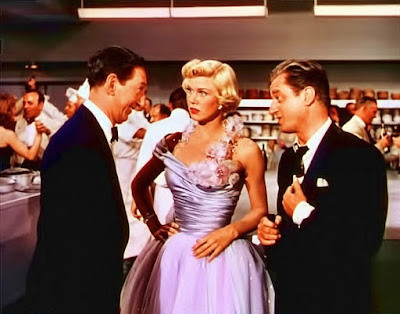 "I'm sorry, Miss Jackson."
April in Paris (David Butler, 1952) – An erratic piece of musical escapism, with bumbling State Department functionary Ray Bolger accidentally inviting chorus girl Dynamite Jackson (Doris Day) to perform at a highbrow arts festival in Paris, then falling in love with her on the boat over.

It's a weird mixture of elements that don't always gel, but still entrance, pall or apall. The surprisingly smutty script has gags about voyeurism and conjugal visits, but also lame right-wing barbs about taxation and government bureaucracy. Claude Dauphin seems to be playing Maurice Chevalier, rather than a character of his own. Bolger is a great dancer too often required to muggingly undermine his own talent, while approximating a mediocre, selfish man being unaccountably fought over by two feisty women. One of them, Day's character, is too prim and well-behaved for the story she's in, but yet she's sexy, brings a real sweetness to the central relationship, and injects the film with all the life it has, at this stage of her career simply brimming over with charisma and talent. Though the songs are variable (Sammy Cahn knows his way around a preposterously drawn-out lyric), her vocals are breathtakingly good, and the big set-piece in the boat's kitchen is fantastic fun: a showcase both for her and for Bolger, whose delirious 'drunk dancing' threatens to subvert his brilliance, only to emerge as a piece of virtuosic art: as big yet impeccably restrained as Jackie Chan's drunken mastery.

There's also a bit where she slags off the Eiffel Tower like a big loser, but it turns out this was a dramatic device intended to show how the city subsequently wins her over. Clever. But not actually. Much like this film. (2) 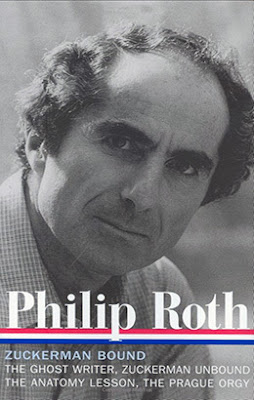 Next time: Fassbinder's Fox and His Friends, the Oscar-winning doc, I Am Not Your Negro, and Jack Kerouac's Big Sur.
Posted by Rick Burin at 12:26