REVIEW: Martha Wainwright and Ed Harcourt at the Roundhouse 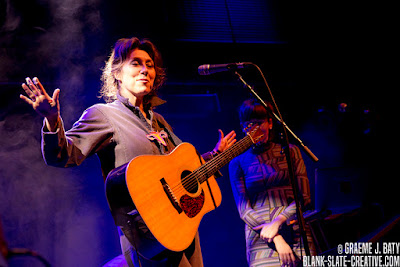 This was an often brilliant evening in the company of one of the 21st century’s most compelling performers, ably supported and assisted by multi-instrumentalist Ed Harcourt, who has never quite done what I fervently wished he might, but does what he can quite brilliantly. He was on the expansive, semi-circular stage first, for an hour-long set based around the David Ford one-man-band model of building a looped backing track on drums, guitar, and sometimes bass and keyboards, and then finally coming to the mic, when the music and expectation hit fever pitch. On paper it threatens to be a laborious, potentially tedious way of playing live, but in practice it rarely is, especially with a musician of Harcourt's prodigious talents.

I bought his first two records, Maplewood and Here Be Monsters, all those years ago, when he was tipped alongside Ryan Adams as the Next Huge Thing. He’s never quite become that, perhaps because his lyrics aren’t good enough and his worldview isn’t very interesting – which is odd, given he's the son of a diplomat, and spent his formative years travelling the world – the between-songs banter suggesting a certain poverty of insight and incisiveness, straining constantly for a humour that he doesn’t really possess (in one early interview he speculated about two bands he’d made up: ‘Limp Wristed’ (“don’t print that, the PC brigade will lynch me”) and ‘Rage Against the Washing Machine; give me strength). He's undeniably a special musician, though, and seems to have acquired a shabby cool as he’s aged: coming on stage in a half-buttoned blackshirt and white suit jacket, his greying hair and thick beard making him look like a hybrid of Jeff Bridges and the young Tom Waits. Then opening his mouth to reveal a plummy middle-England accent.

Interest ebbs and flows during his set, which kicks off with Antarctica – as good an advert as any for his lyrical poverty – but there are fine moments, Harcourt enthusiastically ripping up the received wisdom about how these songs go, with a tightly-packed Apple of My Eye (debuted on Maplewood, perfected on Here Be Monsters), and a climactic Crimson Tears, expanded and turned into a languidly lost jazz track. Loup Garou, his werewolf song, is a simple, sexy rocker, the lovely, Waits-ish Until Tomorrow Then reveals unexpected depths, and new song Velvet and Gold finds him in atypically political mode – bluntly if powerfully taking aim at Tony Blair’s life and legacy – though it’s his tender list song about love, Murmur in My Heart, that sticks in the memory the longest, his guitar whining and throbbing as he moves from the offbeat poetry of “She’s the buzz from my guitar” to the plaintive, desperate “She’s the murmur in my heart.” 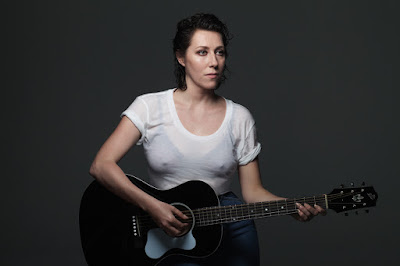 Like her backing band, Martha’s wearing a grey-blue jumpsuit, a large autumn leaf necklace in Native American style hanging over her chest, her hair half-up, that imperious nose and wicked mouth wrapping around scaling melodies, turning warm when she sings of her children, barking in that way she does when she’s mad. She plays a few from her new record, including a charming Francie – shades of Kate Bush’s glorious, transcendent Bertie – and a playful, old-fashioned version of Francis (written for the same son), composed by her brother Rufus, and surely the best Cole Porter song he didn’t actually write since Tom Waits’ A Foreign Affair. Not all of the new material is so persuasive. Her new record is patchy – procreation and motherhood taking rather up her time and talents – and Window, which was written for her elder child and sounds on the record like it is being made up on the spot, has neither a proper tune nor any good words, and ideally you’d want both.

She is such a mesmerising performer, though, that she can wring brilliance from almost anything, her hips rotating sensually, her foot coming off the floor and her knee up towards her chest again and again in a mannerism that seems both inexplicable and inevitable, as much a part of her act as her easy humour, constant between-songs swearing and that unapproachable voice, racing over the octaves, blasting the roof off the Roundhouse or staying husky, deep and disgruntled somewhere in her larynx. The response from a sold-out crowd in an all-seated Roundhouse? Almost nothing, the audience bafflingly muted and inert, feeding off Martha, perhaps, but feeding nothing back.

She barely seems to notice. Leonard Cohen’s Chelsea Hotel #2 is the highlight: among the most remarkable things I’ve ever seen or heard, at a gig or anywhere else (even after a false start in which she leaps straight into the second verse). At one point she’s crouched on the floor, her voice somewhere in the rafters, her heart somewhere in Hell. There are versions of it on YouTube, one from 10 years ago, another when she started doing it again live in December – clutching a lyric sheet, skitting around the tune – but nothing will ever come close to the way she sang it last night. It was revelatory.

She's backed by Bernice, a Canadian band who've also been touring with her as support act, and whose singer, Robin Dann, looks – in the words of my concert buddy – "like she is about to do science": thick glasses, tied-back hair, and overalls with sensible shoes. The rest of the band also seem to have been allowed out of the lab at short notice to create an unsatisfyingly muddy, murky sound, but there's clearly talent in there, especially from guitarist and keyboardist Thom Gill. It's he alone who accompanies Martha on Chelsea Hotel, switching to piano and offering a blissful counterpoint to the fuzzy swampiness that dominates. At one point Martha breaks out a cheap electric guitar she got from her first boyfriend, and it makes a little more sense.

Another new song, Look Into My Eyes, is based around a short keyboard riff and a snatch of lines written by Martha’s aunt, the legendary Anna McGarrigle, later worked into a song by the pair and Anna’s daughter Lily Lanken; played live, it’s somehow both luscious and haunting, like a newly-minted Kate and Anna song from the Matapedia era. She stretches back to her second record for a bracing, confessional Jimi, then invites Harcourt on for a half-hour jam that includes a duet at the piano on Gram Parsons’ heartbreaking A Song for You (Ed playing and singing, Martha straddled on the end of the stool, facing him, crooning quietly into the mic), a new co-written song that took Martha an hour to write and Harcourt two weeks to finish, and a rousing reading of one of my favourites: the proudly, coldly and euphorically alienated Factory, from her first record.

She finishes with the last song her mother ever wrote, Prosperina, a song of beguiling simplicity, like the saddest nursery rhyme ever written. When Martha sings it, she’s stripped down to skin-tight tartan trousers and an MW t-shirt that she’s customised with the words ‘Fuck the president’. It seems to say something profound about her resolve, her fearlessness, her duality, her complete and stark difference to just about anyone else around: her mother’s rich sense of musical heritage and profound spiritual innocence, her father’s foul-mouthed non-conformity, her own immutable beauty and singularity. She’s erratic and as much so in concert as on record, playing songs she’s barely rehearsed and others that sound like writer’s block, backed by a sterile, unsuitable ensemble, but just try to take your eyes off her, or think of anyone who’s a third as good as she is when she’s on song. Here that transcendence was periodic, most striking at the Chelsea Hotel, where:

You were famous, your heart was a legend
You told me again you preferred handsome men
But for me you would make an exception.

I pinched that shot at the top from these fellas. It's from her date at the Gateshead Sage.
Posted by Rick Burin at 12:48