Me at the Spectre premiere 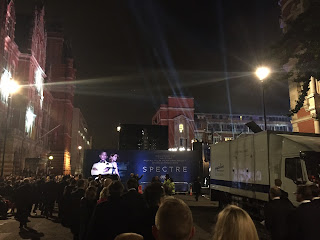 Yes thank you I will have my Pulitzer now

I went to the Spectre premiere last week, as it was at my office. It was amazing. The whole place was transformed, the red carpet was thick and plushy under my feet, I saw the stars of the film and then, after a speech from Sam Mendes, I saw the film.

I found out I had been successful in the staff ballot a couple of weeks before the event. There weren't too many to go round, so I was very excited. The ticket arrived in a fancy wallet with gold writing (not pictured).

In the morning, I saw a big mask arriving at Stage Door. It looked like this: 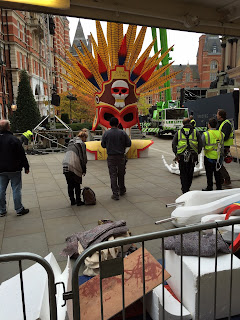 I got changed into my suit jacket from TK Maxx and my bow-tie that I got for £1.50 on eBay and went to join the red carpet. The red carpet looked like this. These are my feet. 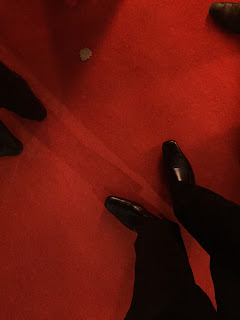 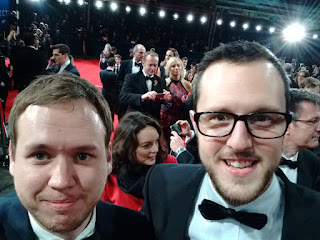 Here I am with Jess. 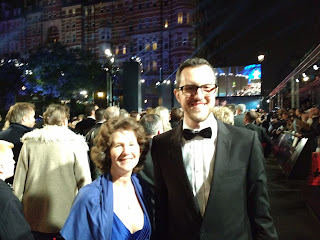 In both cases, I am the one with the bumfluff beard. I was pretty delighted about the whole thing. The premiere and the beard. 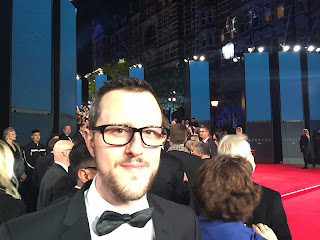 This is how the Hall looked as we approached: 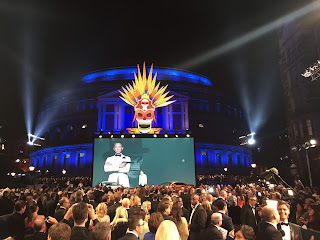 Of all the people it was possible to see, I was most excited about seeing Ben Whishaw, as he's a wonderful actor. Here he is being wonderful: 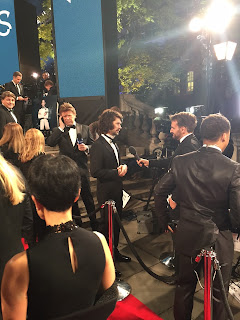 He subsequently registered my excitement and gave me a smile that I like to think was sincere rather than frightened. I also saw Andrew Scott, and took this photo for my wife, who is a big fan. She said I can share it with you too, so that's cool: 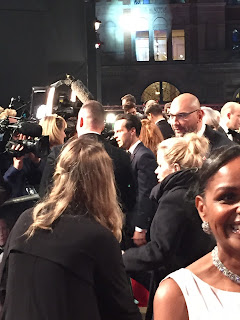 After that, I went and stood in the middle of the carpet. Despite this, I have not become a social media sensation (I would suggest #HotBondPremiereGuy if you need a hashtag). 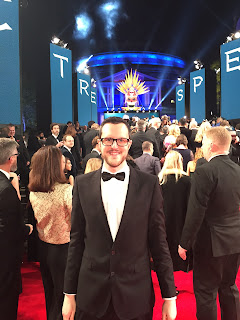 Security guards I'd never seen before kept telling me to hurry up, or else gave me very detailed instructions on how to get into the building where I work, but I managed to enjoy my moment by ignoring them. Eventually they got me to move. On the way past, I saw a car and David Walliams. Martin thought it was Sean Connery on the stage, but it wasn't. 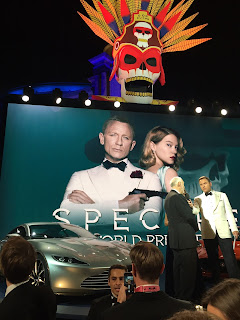 Along the side of the stage, I tried to take an arty shot, but it looked a bit rubbish: 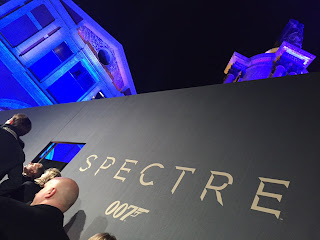 I had some water (shaken, not stirred! - I really hate myself) and met some 'friends' (work colleagues), then I went into the world's bestest auditorium, which was filling up: 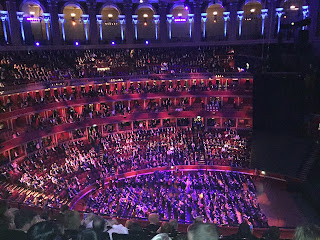 They showed the rest of the red carpet stuff on the big screen: 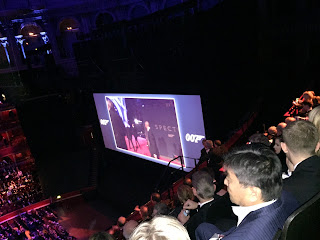 Then Sam Mendes came on with the cast. We had a pretty good view: 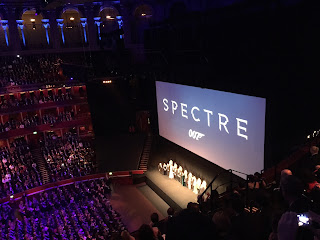 But their heads are quite fuzzy irl. 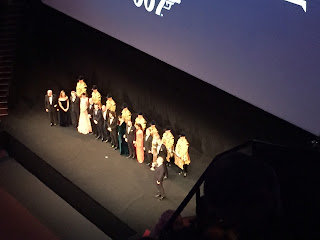 Then the lights went down and the film began. 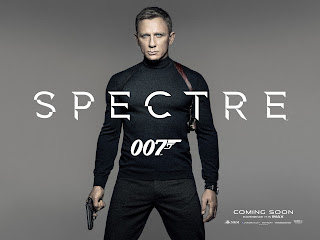 Spectre (Sam Mendes, 2015) - Since when did Bond movies get good? Since Casino Royale really (with one boring, Quantum-shaped wobble), when they discovered emotional depth, quiet pathos and the joys of a knowing reference that isn’t just smugly parodic, and encouraged Bond to embrace his world-weariness, the grubbiness of his profession and a brutal, down-and-dirty fighting style, which is now all rabbit-punches and elbows to the face. I appreciate that this isn’t what everyone wants from Bond, but it is what I want.

Spectre isn’t as great as Skyfall, but that is such a high-watermark: a remarkably tricky act to follow. It is, however, a worthy successor. The scene with the rat is probably my favourite moment in a Bond film – giving him, perhaps for the first time, a sense of humour that’s warm and whimsical and self-mocking – there are wonderful supporting bits for Ralph Fiennes and Ben Whishaw, two of the best British actors working today, and the action sequences repeatedly deliver. My favourite is the opener, which is just a virtuosic piece of movie-making: a five-minute Wellesian tracking shot (a nod to Touch of Evil, perhaps, as we’re in Mexico), which follows two figures dressed as skeletons through the streets on the Day of the Dead, then launches us into a short, sharp assassination attempt ending with a fall to earth.

It’s a stunning start to an extremely entertaining, very likeable film that sometimes leans too heavily on flashy motors and callbacks to previous films at the expense of building a gripping story of its own – the plot is frankly a little scant for a film that runs 2hrs 30 – but delivers in just about every other way, with well-drawn supporting characters, good gags and, like, proper acting. While a craggy Craig doesn’t have as many moments to display dramatic range as he did in either Skyfall or Casino Royale, he’s asked to bear this film on his broad back, and he does it with ease. A mention, too, for Sherlock’s Moriarty, Andrew Scott, who does a lot with a slightly imprecise part, and chief villain Christoph Waltz, whose greying locks and hushed, faux-reasoned erudition calls to mind no-one so clearly as Jose Mourinho – though obviously Jose Mourinho is a lot more evil. By contrast, the Bond women (Lea Seydoux and Monica Bellucci) are fine, just... not that interesting, with the script and cinematography doing most of the heavy lifting. And even then, there's a moment where Seydoux orders Bond to leave her building "in the next 10 minutes" or she'll get security to eject him. That's rather a long time, and conspicuously slack screenwriting.

Spectre isn’t perfect, but it’s pretty damn great: riotously enjoyable, genuinely affecting and with a handling of Bond mythology that’s fresh yet respectful, the film pervaded by a swaggering self-confidence (and featuring additional dialogue by West End superstar Jez Butterworth!). If it is Mendes and Craig’s final Bond, it’s a good one to bow out with, but I really hope it’s not, since its balance of artistry, intelligence and blockbuster smarts lifts it way, way out of the ordinary. Not only did Bond films get good, but they’ve stayed good. (3)

Sorry if this was boring.
Posted by Rick Burin at 12:49