Sort of. It turns out that while William excelled playing a series of rogues throughout the Pre-Code era, away from the screen he was self-effacing to a fault, while devoting his time and energies to inventing and sailing. Sounds like a nice guy, but not perhaps the best subject for a biography, especially as most of the people who could fill in the rest have long since passed on. That makes Warren William: Magnificent Scoundrel of Pre-Code Hollywood (John Stangeland, 2010) an admirable attempt to plug a key gap in film history, but a less than gripping tome. It also means that I had to look beyond his life for 10 things truly worthy of your attention. If you do still want to take the plunge, you’ll find some rare candid shots, a few insights from William’s nieces and a biographer with a fair writing style and a decent grasp of cinema’s past. 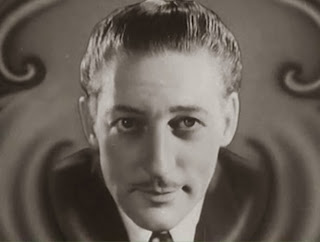 1. Satan Met a Lady was named by an office boy. Despairing execs offered $25 to whoever could come up with a decent title for the 1935 screwball remake of The Maltese Falcon. The devilish moniker presumably came from author Dashiel Hammett’s description of his hero, Sam Spade, as “a blonde satan”.

2. William’s wife Helen was 17 years his senior. She claimed just seven. It’s unknown whether he ever found out.

3. Bette Davis may have been sacked from The Case of the Howling Dog – the first ever Perry Mason film – because of her boobs. “Be sure that Davis has her bulbs wrapped up. If she doesn’t do it we are either going to retake or put her out of the picture,” said a memo from studio head Jack Warner. She was replaced by Mary Astor shortly afterwards.

4. Davis, that big-eyed, multi-faceted walking argument, claimed that William repeatedly tried to seduce her. He doesn’t seem to have bothered with anyone else, aside from his wife.

5. In Smarty – an abysmal, appallingly sexist 1934 movie that majorly contributed to William’s slide out of the big time – the star was forced to hit co-star Joan Blondell. He described filming the sequence as “the most embarrassing moment of my life”.

6. The film was promoted by a pressbook in which exhibitors were encouraged to sponsor a local newspaper contest gathering stories about domestic abuse – “but make ‘em funny!”

7. In 1935, after William was passed over for the lead in Captain Blood (in favour of the guy who played a corpse opposite him earlier that year, Errol Flynn), the star wrote a furious missive to the studio lawyer, Roy Obringer, demanding to be released from his contract. He left the next year.

8. "They gave me a script; I told them it stank.” So said director Andre de Toth about Counter Espionage, the Lone Wolf series entry he had been assigned to direct. He asked for two weeks to shoot the movie – twice what had been approved – and was berated by Columbia chief Harry Cohn. If they removed the clause in his contract requiring him to produce films “to the best of his ability”, de Toth suggested, he’d be happy to go faster.

9. In 1942, Fox planned to mount an all-star mystery called The Four Star Murder Case, featuring Philo Vance (William), Charlie Chan (Sidney Toler), Mike Shayne (Lloyd Nolan) and Mr Moto (Peter Lorre), with the latter helping out from within an internment camp. I have a new favourite movie and it has never been made.

10. William’s tragic early death was due to multiple melanoma, probably caused by his relentless woodworking in confined spaces.

... and so as not to end on such a gloomy note, I loved Alexander Woollcott's magnificent dismissal of the 1926 Broadway show, Fanny: "written by Willard Mack and Mr Belasco and they both ought to be ashamed of themselves and each other."
Posted by Rick Burin at 18:01