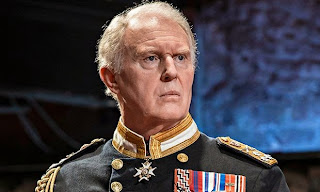 King Charles III has been festooned with garlands and approving royalty-based puns by a succession of national reviewers, who’ve heralded it with phrases like “the play of the year” and “a crowning achievement”. Watching it during the final fortnight of its run at the West End’s Wyndham’s Theatre, I found myself unable to reconcile these plaudits with the entertaining, sentimental, tabloidish drama I was seeing: something like Macbeth + Henry IV + Yes, Minister + The Sun. Perhaps I'd been hoodwinked and all the right-wing papers really want is a cosy, deferential pageant in which every satirical swipe comes from a sabre with its safety cover firmly in place.

The play's gimmick is that it takes the template of the historical, monarchical drama touched with populism – think those classics of the ‘60s, from Jean Anouilh’s incomparable Becket to Bolt’s A Man for All Seasons and the campy excesses of James Goldman’s The Lion in Winter – sets it in the present day, and then loads it with Shakespearean tropes and blank verse, as the newly-crowned King Charles (Tim Pigott-Smith) takes a principled stand when asked to sign off his first bill, William (Oliver Chris) is pushed into the limelight by the Lady Macbeth-like Kate (Lydia Wilson), and his other son – Prince Hal-ly, if you will – falls in love with a socialist art student (Tafline Steen).

Pigott-Smith, whose turn as the sadistic imperialist Charles Merrick in ITV’s near-mythic Jewel in the Crown remains a high-watermark of recent British acting, is well-cast and highly watchable as a recognisable, resolute, emphatic but nonetheless conflicted Charles, who has waited so long for the top prize that he now wants to make his mark, if only by refusing to make his mark. And while Chris is flat and increasingly unconvincing, and both Margot Leicester (as Camilla) and Steen unbalance moments of pathos and humour with grating actorly intonation, Wilson works well as the smart, clever Kate – calling him “husband” like her Shakespearean forebear – and Richard Goulding is absolutely exceptional as Harry. Writer Mike Bartlett took a gamble in presenting the younger prince as a hedonist whose muddled, lost soul is invigorated by love, but it really works, largely because in Goulding’s hands this bumbling, jumbled, inwardly honourable man is both admirable and adorable. Whether it gels with the central narrative is another question.

I wonder if the play has attracted such raves because it’s accessible and broadly entertaining whilst appearing highbrow, satirical and insightful. It is all of those things in turn, but it’s also confused, shallow, unfocused, overlong and somewhat smug, especially given its slender achievement. It also isn’t especially timely – it hangs some of its plot on the question of press freedom, but the role of the royal family, the restrictions on monarchical power and the balance to be struck between an elected chamber and an anointed ruler are hardly pressing questions in 2014. And wouldn’t have been in 2004, or 1994, or really any time since about 1651.

Like Becket and A Man for All Seasons, it's also - at least superficially - a play about conscience. The issue there, I think, is credibility. Whereas those works traded on history, where the stakes were real and provable, here the joke is that we are heightening Charles and Kate to the level of Shakespearean drama. A whimsical conceit, but the play can't then dislodge its tongue from its cheek sufficiently well to make us care about what we're seeing, especially when the wider plot developments quickly become so preposterous.

It paints reasonable portraits of its principal players, filtered effectively if not intelligently through Shakespeare, but even at its best, the characterisation leans towards caricature, which, while amusing, rather undermines any serious points it’s purporting to make.

It doesn’t help that those points – that Britain itself is vanishing, slice by slice, that there is a balance to be struck on press censorship, that there exists an insoluble bond between ruler and people, and that Charles probably shouldn’t meddle if he ever gets the big gig – are neither coherent nor original enough to merit these rhapsodies from the critics. Likewise, Rupert Goold’s staging, while clever, economical and swiftly adaptable, is fairly unexceptional, eliciting nary a gasp from the audience, except for one very smart bit of theatre at the end of Act II.

It’s a fairly good play, with a couple of strong performances and an agreeable first half, but it’s not deep, incisive or believable enough to ultimately take the crown. I suppose you could say that it’s a succession of near misses and a great big ‘king disappointment. (2.5)
Posted by Rick Burin at 18:46