The National, Lance Armstrong and A Perfume Ad: The Movie - Reviews #192

A quartet of documentaries in this belated round-up of stuff I watched in the small portion of free time not allocated to watching the World Cup. 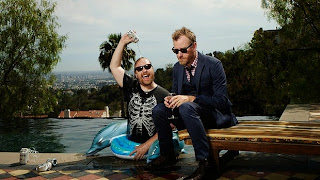 CINEMA: Mistaken for Strangers (Tom Berninger, 2013) - This documentary about delightful indie mumblers The National is so meta that it almost swallows itself whole, but also sweet and tender and funny, tracing the relationship between their serious, sharp-suited frontman and the slacker brother he invites to be their roadie, but who spends all his time trying to make a film... this film. The gulf between the rockumentary he imagines himself to be making and the one he ends up with is bafflingly and brilliantly big.

There isn't a great deal of music, but you can get that on CD. It's more a shambling, insightful piece about brotherly bonds, with some (possibly staged) comic interludes that scale the heights of absurdity. (3) 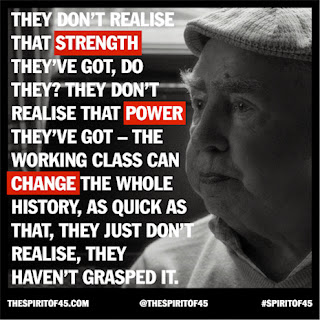 The Spirit of '45 (Ken Loach, 2013) - Ken Loach's powerful, poignant polemic - about communal goals dreamt of, fought for, won and lost in the postwar period - is at once uplifting and soul-destroying, as the astonishing programme of reforms achieved by Attlee's administration are eroded, picked apart or junked by grasping free-marketeers.

The film also brought home to me how completely socialist ideas are kept out of the mainstream media: it felt bizarre to see people on my TV advocating the renationalisation of key public services - and yet YouGov says that's a majority view in this country.

Occasionally Loach loses the thread of his argument (and the RMT spokesman he chooses is poor), but the diverse selection of left-leaning contributors effectively mix the personal and the political - the best, and the one with the saddest story, is an 87-year-old Scouser supping beer in a pub - while the archive footage is simply stunning. There's some sizzling footage of NHS architect Nye Bevan railing against injustice, which nestles nicely beside interviews with my personal hero, the late Tony Benn.

The overall effect is of watching Terence Davies' Of Time and the City but injected with urgency and righteous, white-hot fury. Call it confirmation bias, but I wish everyone in the country was forced to watch this beautiful socialist propaganda. (3.5) 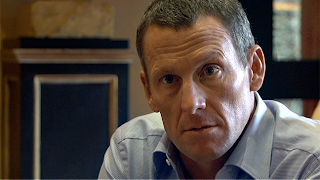 The Armstrong Lie (Alex Gibney, 2013) - Thank goodness Alex Gibney has found a use for all that footage he shot of Lance Armstrong in 2009 and then wasn't able to use.

This slightly messy, repetitive but nonetheless riveting documentary asks the question no-one else has: why did Armstrong return in 2009, and risk jeopardising his legacy. At first it appears that Gibney is only asking it so he has an excuse to roll out the wealth of access-most-areas film he shot whilst improbably constructing an Anderson hagiography five years back, but thankfully that's not the case. It turns out to be a very worthwhile question, and a worthwhile exercise.

For the uninitiated: Lance Armstrong was a young national cycling champion when he was struck down by cancer in 1996. After fighting his way back to health, he did the inconceivable, winning the sport's most gruelling worldwide competition - the epic Tour de France - a full seven times in succession, whilst becoming an inspiration to millions and amassing a personal fortune of $150m.

Perhaps unsurprisingly, given the sport's reputation and his improbable success, throughout he was dogged by accusations of doping, which he withstood thanks to the brassiest of brass necks and a policy of bullying, smearing and suing anyone who aired those allegations. Last year, he finally came clean to Oprah Winfrey, after the doping organisation USADA handed his arse to him on a plate, via an extraordinarily thorough and damning report.

His story, then, was The Armstrong Lie - and he tells it again and again here, in press conferences where he humiliates bolshy British journalists, in direct-to-camera addresses where he spins that impeccably-conceived tale of triumph over adversity and, in a new and modified version given to Gilbey five months after Oprah, where he admits that, yes, he doped, but it wasn't cheating, the facts once more moulded to fit a narrative of his making.

Armstrong is a fascinating subject - extraordinarily charismatic, with a will of iron and a habit of looking you dead in the eye and lying his face off - and though Gibney was taken in like so many others: willing to embrace the myth rather than question the man, the intervention of fate (or more specifically USADA) has led to a valuable film, if almost by accident.

You can see why Armstrong's defenders wanted to believe, and not just because of the story. The superbly-edited footage of him trouncing his rivals is genuinely exhilarating, at least until you hear him calling one detractor a "whore" on television, publicly belittling an opponent who dared speak out about Anderson's drug-pushing associate, and purposefully and repeatedly humiliating another accuser four years after an enforced legal wrangle.

That collision between the idyllic fantasy and the cold, heartless reality makes for chilling, compulsive viewing, as does the juxtaposition of heartwarming comeback footage with post fall-from-grace humility. While Gibney may not always be in control of his structure or his story, the compensations are vast. (3) 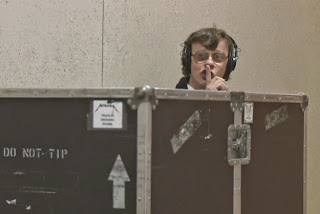 "Wanna meet Lars."
Mission to Lars (William Spicer and James Moore, 2012) - A Telegraph journalist takes her brother Tom - who suffers from Fragile X or "autism with bells on" - on a road trip through America. Her mission? To get him in a room with Lars Ulrich, the Metallica drummer with whom he has an almost unaccountable obsession.

This documentary is formulaic in the extreme, feels padded even at 76 minutes and forces you to spend quite a lot of company with a woman I frankly found quite annoying (Tom is the only person in the film who doesn't seem acutely aware of the cameras).

But as a film it has two major things going for it. Firstly, it's a valuable character study, offering insight not just into Fragile X, but into a single, singular sufferer, with his many individualistic idiosyncracies. And, secondly, the final 10 minutes left me with a huge grin plastered all over my stupid face. If it doesn't do the same to you then you're a horrible person and I hate you. (2.5)

Somebody Up There Likes Me (Robert Wise, 1956) - A young, Brando-ish Paul Newman is the inarticulate, brutalised inner-city middleweight Rocky Graziano - definitely - in this bruising boxing biopic.

While the star doesn't unfailingly convince as a thick, Italian-American New Yorker, he does bring a compulsive dynamism to the part, while anticipating a trio of his most indelible creations: Fast Eddie Felson, Hud and Cool Hand Luke.

The rest of the film is interesting too, its clichés and the disjointed coupling of its various elements offset by frequent Hitchcock screenwriter Ernest Lehman's smart decision to frame this as a story of poor immigrant communities trying (hopelessly?) to make something of themselves - without being stitched up by the establishment.

It lacks the myth-making cohesion of Body and Soul, the highlight of the '40s boxing movie cycle, but it's a solid film, with a good cast, some authentic location shooting and a few flourishes from Wise, including commentary of Graziano's title fight drifting out into a deserted street: everyone in his former community glued to their radio sets as he punches - and takes the punishment - for his pride and theirs. (3)

Bluebeard's Eighth Wife (Ernst Lubitsch, 1938) - A quick rewatch, as I was reviewing for MovieMail. The sanatorium coda is horribly dated, but overall it's an underrated Lubitsch outing, with a typically witty Wilder/Brackett script and good performances across the board. Cooper sometimes looks a little hesitant in one of his first comic roles, but he had a flair for humour, and that shows - especially during an irresistibly goofy song. David Niven remains the stand-out, though, as Colbert's hapless, idiotic suitor. (3) 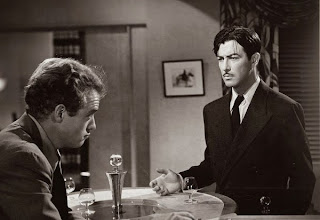 *SPOILERS*
Johnny Eager (Mervyn LeRoy, 1941) - Robert Taylor's cynical crimelord takes quite a while to reform for love in this crime melodrama, that flimsy central story augmented by a litany of incidental pleasures.

It's big-eyed, guileless Lana Turner who does it - her rather fortunate re-appearance in Taylor's life just one of a string of ridiculous if not unwelcome coincidences populating the film - loving him not wisely but too well, then going insane after he uses her to get his greyhound track approved (well, I said it was flimsy).

The film rather hobbles from one sporadic highlight to the next, the majority provided by a stellar supporting cast, from Van Heflin's poetically acerbic Oscar-winning rants, to Paul Stewart's brooding bits as a fickle gunman and - best of all - the mighty Glenda Farrell turning up to steal the film as Taylor's proud, desperate ex. Turner's good too, in a daft part, that excellent voice and instinctive emoting put to good use, though Taylor remains in fifth gear, which was his top gear.

While the plotting is slight, over-familiar and bears the hallmarks of being made up on the spot, those stand-out turns are supported by some fine dialogue - particularly for Heflin; shades of Thomas Mitchell in Angels Over Broadway - a decent shoot-out in an almost Western style, and a very LeRoy fondness for shots of people walking urgently through busy, exciting rooms, almost to the point of self-parody. I also like the way its hysterical early speechifying is completely (though subtly) subverted by what immediately follows, exhibiting a disregard for the spirit of the Hays Code that was very unusual in 1941.

Made as gangster pictures were giving way to that genre we later called "film noir", it's an uncertain picture but also a worthwhile one, if more for what comes with it than what it intended to be. (2.5) 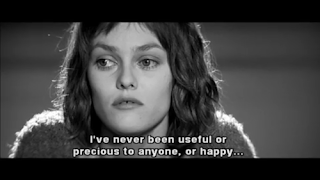 The Girl on the Bridge (Patrice Leconte, 1999) - A stylised, monochrome French drama from the late '90s, with the look, feel and depth of a perfume ad. Vanessa Paradis is a suicidal young woman, forever waiting for something to happen, who's saved from a watery grave by knife-thrower Daniel Auteuil, and becomes a part of his act. The part he chucks knives at.

After a rather neat opening scene, this smug, sloppy film quickly unravels, hopping from a makeover scene to casino wins to infidelities, its thoughts on love and luck only half-developed, and a gaping chasm where its heart should be. In mitigation, I did kind of like the narrative device near the close, and the final exchange is quite good, though it's hardly earned by what precedes it. (1.5)

Thanks for reading.
Posted by Rick Burin at 18:20

Labels: blog, cinema, documentary, film, Ken Loach, Mission to Lars, Mistaken for Strangers, movie, review, Somebody Up There Likes Me, The Armstrong Lie, The Girl on the Bridge, The National, The Spirit of '45
Location: London, UK