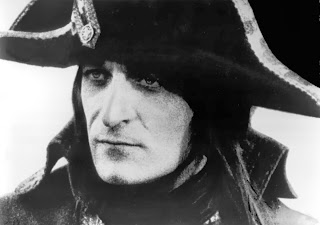 Yesterday saw a rare screening of Kevin Brownlow's near-mythic five-and-a-half-hour reconstruction of Abel Gance's silent film Napoleon, a labour of love that has dominated more than 50 years of the historian's life, but has never been available on home video, and maybe never will be, due to ongoing and thorny contract wrangles with Francis Ford Coppola, who has his own version, which is incomplete, runs at the wrong speed and has a score written by his dad.

Brownlow's version, by contrast, is scored by arguably the greatest of all silent film composers, Carl Davis, his collaborator on the legendary Thames Silents project in the 1980s, and the man responsible for two of the all-time great soundtracks: The Student Prince in Old Heidelberg and The Kid Brother. And yesterday, at the Royal Festival Hall, that accompaniment came live, with Davis conducting the Philharmonia Orchestra in front of a packed house, to stunning effect.

Seen in this, its true form, Napoleon is a staggering achievement, a consistently dazzling mixture of innovation, spectacle and history writ-large, where insight into character and dramatic metaphor often come courtesy of a seemingly endless box of tricks, including octuple-exposure, montages stuffed with brain-scrambling cross-cutting, and a camera that's going to go wherever Gance wants it to, with no thought as to whether such things have ever been done on screen before.

The film kicks off with two of the most extraordinary sequences I've ever seen on celluloid. The first is a marriage of visual poetry and foreshadowing, saturated in its character's singular iconography, as the 10-year-old Napoleon wages war in the snowy environs of his school, Brienne, where such games are seen as a judge of character. Napoleon, an intense, unsmiling boy who lives in "wild isolation", is already a military mastermind, whose use of decoy, reflective vision and attack-as-defence wins him a victory against almost impossible odds. This passage climaxes with a barrage of unforgettable imagery, arresting pictures laid one on top of the other at frenetic speed, as our hero stands motionless in his battlefield, barking instructions until the glory is his. At one point, Gance even breaks out a handheld camera, at another shoots from a child's eyeline, capturing the weird dynamic of this deadly serious duel.

The next set-piece, which surely influenced Jean Vigo's surrealistic masterwork Zero de conduite, released in France just six years later, has Napoleon reacting to the setting free of his (highly symbolic) pet eagle by punching everybody in his dorm room, culminating in a pillow fight that covers every frame in feathers. The pay-off, with Napoleon alone, resting on a cannon, feathers in his hair and tears dripping down his face, only for the eagle to return and a rare smile to bless his angry little face, is an image I don't think I'll ever forget.

I didn't find the next two big sequences as successful, though there are superb things in both of them. The first is only tangentially related to Napoleon: a reconstruction of the first public performance of Le Marseillaise which has a few rousing moments, but only really comes to life with its introduction of the central figure (now played by Albert Dieudonné), leaning against a pillar, looking as cool as Belmondo in A bout de souffle, before turning to the camera in profile. Then the chap who wrote the anthem asks him his name - there's quite a lot of people asking other people what their names are in this film, so it can introduce both character and actor in a handy title-card. More consistent is an ingenious passage in which we see the growing dominance of mob rule, crystallised in one bloody night, as Napoleon saw it: snatches of cries, shadows and incomplete images, viewed through the grates of a run-down second floor apartment.

Despite its impressive credentials, including shooting on the genuine Corsican locales where the events transpired, the next major passage lacks dramatic engagement - with too much footage of people merely sitting around - until the film announces that Napoleon is about to embark on an "incredible adventure" and then all hell breaks loose: there's a stunning sequence in a bar, with Napoleon rising to counter his naysayers, then an escape on horseback, and then a simply staggering sequence in which he steals a French flag from the government headquarters and uses it as a sail to evade his pursuers as he heads off into a brewing sirocco, his battle against the elements juxtaposed with a gathering storm in parliament, shot by Gance - in one of those left-centre moves that suggests you're in the presence of genuine greatness - as if it were also being rocked by the tempestuous waves. There's just time for a neat, funny cameo for Horatio Nelson, then the intermission sign flashes up. End of part one.

Part two is much shorter and rather less revolutionary in both subject and style, dealing largely with the Siege of Toulon, in which Napoleon - now an artillery captain - stakes his reputation on a risky offensive against a far greater force (shadows of Brienne). There's stunning imagery to spare - rain-swept battlefields, a fleet on fire, Napoleon standing amidst the wreckage (a jawdropping image that forms the centre-piece of the event programme) - but it isn't as coherent or emotionally engaging as what precedes or what follows.

The third quarter is the most tonally outrageous, in a film that doesn't give a single damn about convention, as Napoleon and Josephine - still relative strangers - are each targeted by "the Terror", personified by Gance's ruthless, outwardly measured Saint-Just, before engaging in a hilariously awkward courtship that can genuinely be filed under "romantic comedy". In between, we get a vignette about a bureaucrat who saves lives by eating execution orders, and watch Napoleon zip to national prominence by quelling an uprising with devastating defensive tactics, then we're into the "Victims' Ball", a decadent, shimmeringly-photographed affair, in which our grim-faced hero, chin jutting out in that formidable fashion, proves he is the sort of man who would play chess at an orgy. And win.

But while the middle passages of the film are often touched with a rare brilliance, it's the first and fourth that I think give Napoleon its claims to greatness. The last is simply a tour-de-force, with two astonishing high points. As Napoleon heads to Italy to revive a tiring army, he stops at the deserted National Assembly hall. There, in the dead of night, the ghosts of the Revolution come to him, rising from the ether and next from their seats, calling on him to be the strong leader that his country needs, the dictator of an all-conquering France, then a united Europe. Allying the best of Eisenstein to the wizardry of Man with a Movie Camera and the seductive fascism of something like Gabriel Over the White House - in which liberal ends are achieved through totalitarian means - it's a piece of propaganda quite unlike anything else I've ever seen, either in form or content.

The other showstopper, as you may have heard, is that ending, in which the curtain pulls away to reveal... three screens, a vast panorama, a massive canvas on which Gance can paint, as Napoleon rouses his army, rides to victory, then reflects on it all from a mountain top: images from his life rushing breathlessly across the triptych: his successes, his calculations - scribbled across endless sheets - his beloved Josephine and his nose twin, that eagle who represents his power, his utter relentlessness and his fortitude.

It's the longest film I've ever seen and among the strangest, most restlessly innovative and technically astounding. There are shortcomings: the characters are generally very black and white - and sometimes too sketchily drawn or aloof to engage with - the film has a propensity for melodrama, and there are sequences that either confuse or drag. And while the acting is largely convincing, it's also - with the exception of Gance and the stony-faced Dieudonné (whose performance as the Christ-like central figure I found perhaps a little too underplayed) - done with rather broad strokes. But such things pale into gripy insignificance when put aside what it does achieve. There's a scope here, not just in terms of its epic logistics, but its destruction of cinematic barriers, that is unmatched not only in the context of silent film, but arguably within film as a whole. Gance attempts to explain Napoleon: his achievements, his character, his mind, not through dialogue, not even through performance, but via an arsenal of innovations that bring to life the man, the way he saw himself, his consuming obsessions.

When Napoleon encounters Josephine at the Victims' Ball, even before he shuns the boobs to go and play chess round the corner, Gance does something so perfect that I'm amazed no-one had ever tried it before - but so inspired that it's probably no surprise at all - he cuts together, in rapid-fire motion, every meaningful, fleeting moment they've shared, like a head rush of romance, every bit as affecting as Borzage's more reflective, more obviously effusive ruminations on the same subject. It's an act of narrative simplicity but technical genius that sums up this most staggering of motion pictures. It's as if Gance had never seen a film before, and no-one had told him that this simply isn't how it's done. (4 - out of 4, for newcomers)
Posted by Rick Burin at 10:38