Why I love... Remember My Forgotten Man

I wrote the first draft of this piece on spec for the Guardian's fantastic Why I Love... series, but they're not accepting freelance contributions, so I decided to go into a bit more depth and tack it up here. 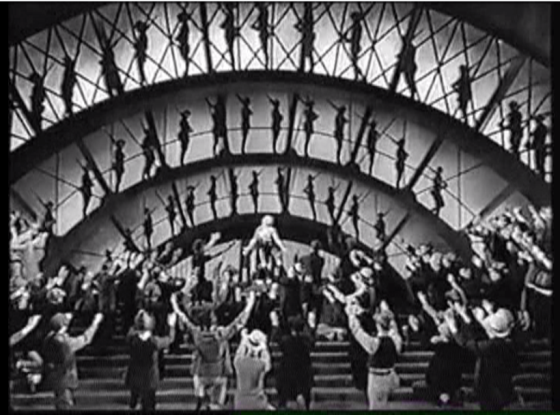 It's arguably the most heightened and heartbreaking evocation of the Great Depression ever filmed: an unforgettable portrait of a people betrayed by their country, gripped by a crisis not of their making, disillusioned, dehumanised and dismissed. Rife with righteous fury, dripping with anguish, and populated by marching masses almost zombified by hopelessness, it's a piece of socialist art pitched somewhere between poetry and propaganda. And it's a number in an otherwise innocuous Hollywood musical from 1933.

For most of its running time, Gold Diggers of 1933 is a standard crowd-pleaser. Though its first half has numerous wry references to poverty, one chilling line from Aline MacMahon about the lengths to which out-of-work chorus girls might be forced to go, and interrupts the new song We're in the Money – sung partly in Pig Latin and introduced by Ginger Rogers, dressed as some coins – because the creditors are closing down rehearsals, this is still a film in which struggling actress Polly (Ruby Keeler), seeking funding for a show, catches the eye of a secret millionaire (Dick Powell), who's young and dashing and lives next door and also happens to be a songwriter. In fact, once Doberman-faced Pre-Code lothario Warren William and ruddy lecher Guy Kibbee turn up, and the movie starts to revolve around that '30s staple of a wealthy family trying to buy off a troublesome showgirl, it seems to forget about reality altogether.

In terms of the score, there are two more numbers staged by visionary choreographer Busby Berkeley: the peculiar, sexualised Pettin' in the Park – featuring eight-year-old dwarf actor Billy Barty, cast as a pervy baby – and the Shadow Waltz, replete with neon violins, in addition to the peppy Powell's solo spots. Some 11 years before his reinvention as a film noir tough guy, he's all chubby cheeks and cheese, crooning soppy songs through open windows. It's all amazing fun, but still just snappy, superior escapist fodder, with a tantalising early reference to stage producer Ned Sparks' vision for a "Big Parade of tears" the only hint that something important might be on the way. Nothing, though, can quite prepare you for what it is.

With the daft plot neatly tied up, Berkeley suddenly drops the big one: a climactic number that runs for almost seven minutes and seems to encapsulate an entire generation's experiences in an endless parade of marching, shuffling feet. Men on a downward spiral that begins at the front and ends at the soup kitchen; an army of heroes deserted by America. Prefaced by Berkeley himself as the crew member yelling: "Everybody on stage for the 'Forgotten Man' number!", and smartly moved to the end of the picture by studio head Jack Warner and the brilliant, staunchly Republican producer Darryl F. Zanuck – resulting in some rather obvious continuity errors – it's a rousing, moving and frankly jaw-dropping spectacle, and an uncompromising piece of political cinema.

In 1933, Hollywood movies were preoccupied with the Depression, as well they might have been. Heroes for Sale encompassed all manner of social problems in tracing the troubled life of Richard Barthelmess's war hero. Hallelujah, I'm a Bum rather daringly – some would say naively – equated joblessness with freedom, while finding a role for ex-silent comic Harry Langdon as a communist binman called Egghead. The exceptional time-travel drama Turn Back the Clock allowed Lee Tracy's tobacconist to relive 20 years of his life, and to confront the major social issues of the day, and the entirely bonkers Gabriel Over the White House, bankrolled by William Randolph Hearst, suggested that dictatorship – in the shape of Walter-Huston-with-superpowers – was the only answer to the nation's ills.

For all their virtues, though, none of these films possess the poetry, the passion or the sheer relentlessness of Remember My Forgotten Man, let alone its concision and erudition. It grips right from the start: the strings plunge, the curtains open and a street scene is revealed. From there on in, there are no cutaways to the audience, no concessions to the wider, engagingly daft story: the focus is entirely on this Depression opus, shot in stunning, Expressionistic fashion by studio cinematographer Sol Polito, the gifted Sicilian who gave Sergeant York its unique, painterly feel. 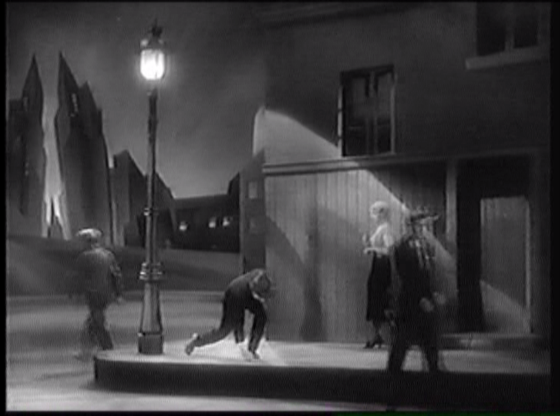 A homeless man (Frank Mills) stands under a streetlamp. A passing white-collar worker drops a cigarette butt on the floor, and he swoops for it. The bum stands and catches the eye of a prostitute (Joan Blondell), who takes a light, then locks eyes with him. He smiles, lowers his gaze and walks away. She looks after him, her coquettish manner evaporating as her face washes over with gloom. “I don’t know if he deserves a bit of sympathy,” she says. “Forget your sympathy, that’s alright with me. I was satisfied to drift along from day to day, till they came and took my man away.”

Though the story naturally attributes the song to Powell's dimpled moneybags, it's actually by Al Dubin and Harry Warren, the pair who'd written the score to Warner's 42nd Street the previous year ("Cancel my contract with Warren and Dubin!" shouts Sparks' character when he hears Powell's tunes for the first time). As a lonely sax starts up a call and response, Blondell slips into the rhythm of the number, and hits us with lyricist Al Dubin's staggering refrain, presumably inspired by Yip Harburg's Brother Can You Spare a Dime?: “Remember my forgotten man? You put a rifle in his hand. You sent him far away, you shouted ‘Hip hooray!’, but look at him today.” As we snap to a close up, we see the tears springing in her eyes. “Remember my forgotten man? You had him cultivate the land. He walked behind a plough, the sweat fell from his brow, but look at him right now…” 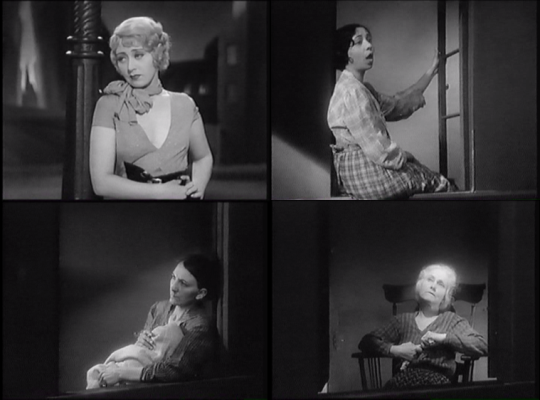 Then she frames the Depression as a tragedy for women too: "And once, he used to love me, I was happy then. He used to take care of me – won't you bring him back again? 'Cause ever since the world began, a woman's got to have a man. Forgetting him, you see, means you're forgetting me – like my forgotten man." Then, without warning, the massive, magnificent voice of African-American vocalist Etta Moten blasts into the film. The implication from Berkeley is clear: this crisis transcends then-significant racial boundaries; each case, regardless of colour, is as tragic as the last (not that Warner gave Moten a screen credit, appallingly). Hanging out of a tenement, she drenches the sequence in blues, restating Blondell’s words as we move past other windows: a starving mother cradling a child (an image so like a couple of Dorothea Lange photos that it's astonishing to note it predates both of them), a pensioner in a rocking chair staring into the middle-distance. Then it’s Sledgehammer Blow 1: a truncheon-wielding cop tries to move on another bum (Billy West), who's lying listlessly in a doorway. As he pulls him to his feet via his lapel, the man's jacket falls open and we see the war medal still pinned there. Blondell closes it, cold fury in her eyes, and pushes him solemnly out of the frame. (There is an added undercurrent here relating to Blondell's own brutalisation by the law; as a young woman she survived an attempted rape by a police officer.)

A fade, and we’re at an army parade in 1917, ticker tape flying, crowds cheering and flags waving, the pitch-black background giving it all the atmosphere of a dream. Another fade and the men are walking more wearily, their faces grim, the rain bucketing down. Sledgehammer Blow 2: more soldiers appear, staggering in the opposite direction, returning from the front bloodied, blinded and crippled. One of them, his face set in grim determination as he strides towards the camera, has a half-naked casualty slung over his back. Fade again and we’re at a soup kitchen, Berkeley’s camera – so often used to idolise chorus girls’ legs in these Warner production numbers – tracking past hungry, lost souls, some with their lips pursed in determination, bowed but not yet broken, shivering against the winter cold. Then Sledgehammer Blow 3, Berkeley pulling out all the stops in a way that comprehensively shifts the focus from the personal (emphasised by the lyrics) to the communal. As silhouetted soldiers march endlessly across a huge, three-tiered dome, a chorus of the unemployed starts up. “We are the real forgotten men,” they sing, these swelling masses marching towards the camera, then turning to Blondell, who helps them blast out one last chorus, their hands rising as if enraptured, glorifying the plaintive cry of the prostitute. 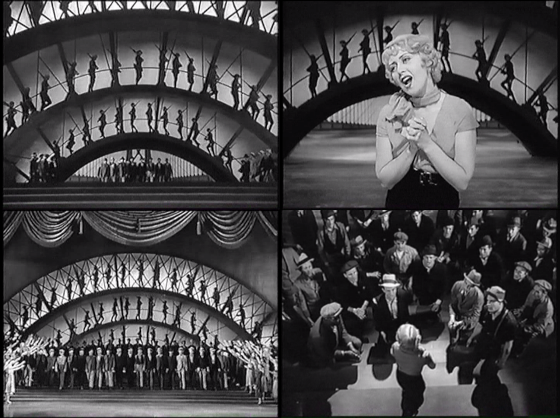 It isn’t that much like a Fred and Ginger film.

The number was conceived by Berkeley, whose remarkable, regimented routines (frequently leading to kaleidoscopic imagery, shot from above) were informed by the Army drills he experienced during his time as an artillery lieutenant. Though it can be viewed as a general indictment of the Hoover Administration’s failure to address the nation’s problems, the direct inspiration for the routine, with its unique and wrenching power, was the May 1932 war veterans' march, in which 17,000 soldiers who had fought in the Great War went to Washington in search of enough money to get by. Two of them were shot by the police, the rest were charged by the Army under the command of General Patton. Alongside The Grapes of Wrath, a stunning translation of the Steinbeck novel made by then "socialist democrat" director John Ford and Zanuck, Berkeley's response is probably the most radical work to come out of a mainstream studio during Hollywood's Golden Age.

Closing your film with an incongruous, unprecedented musical routine is ballsy, but it isn't courageous. What is courageous, even prior to the communist witchhunts of subsequent decades, is climaxing with a number that accuses the Government of betraying its people, and calls on the country's lawmakers to recognise the sacrifices made during World War One (and in forming the economic backbone of the country), and to come to the aid of the working classes. Turn off the sound and chop a couple of zeroes off the budget, and the sight of these impoverished masses striding towards the camera, facing down their oppressors and calling for the state to intervene, could easily have been culled from a Soviet propaganda film.

I previously wrote about Remember My Forgotten Man in this post, "Nine things I like about movies". You can watch the number itself on YouTube.
Posted by Rick Burin at 13:06