I write. A lot. Features, reviews, stories, emails to my brother, even the odd poem (not to my brother). But I've never tried to write sketch comedy before a week last Thursday. Here, for reasons of vainglory and masochism, are the (sadly rejected) efforts I sent to Newsjack, the BBC's rather excellent open source topical comedy show. I've also added some brief explanations of what the hell I was playing at, in case you weren't bored enough. Anyway, I'll keep plugging away, and if I get anything on Newsjack, you'll be the first to know, and probably the second, possibly also the fifth, as I'm unlikely to shut up about it. 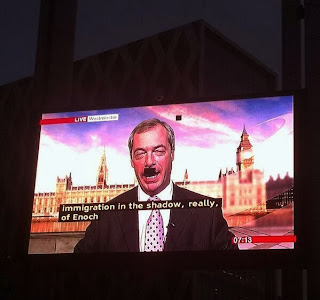 INTRO
In that prime time slot just before How Clean Is It Behind Your Fridge? - presented by Godfrey Bloom - Channel 4 News reported that the teenage Nigel Farage was regarded as a "fascist" by some of his teachers, and had sung Hitler Youth songs, a claim he denied. When Hitler was a teenager, of course, he also faced criticism from his teachers.

Knock on the door.

HEADTEACHER
Ah yes, Hitler, I wanted to see you.

TEENAGE HITLER (in a voice a lot like Nigel Farage)
What seems to be the problem, sir?

HEADTEACHER
I've had some complaints from the other teachers about your behaviour, young man. Apparently you've been sitting outside class on a bar stool, smoking and enjoying a leisurely pint, surrounded by photographers. You insist on coming to school dressed in tweed, Frau Schlemmer tells me you interrupted her lesson yesterday to make an impromptu speech against inheritance tax, and now you're demanding that your little army of followers refer to you as "Nigel". You've even shaved off your moustache. I don't think this behaviour is really befitting of a prefect.

HITLER
Listen here, headteacher. Germany's been sold down the river by the despised EU pig-dogs: joyless bureaucrats who don't have anything in common with the likes of us. They think ordinary folks like you and I shouldn't be allowed to smoke in pubs, have a beer at work or annex the Sudetenland.

HITLER (interrupting)
Exactly. If we want to have a laugh with our mates, watch the footy on the box or deport anyone whose first name isn't Franz, I suppose it's inevitable that some jumped up little... little... Mussolini is going to take offence. Cigarette?

HEADTEACHER
Thanks, I don't mind if I- Damn it, Hitler, you've done it again. You're just so persuasive.

HITLER
Thanks chief. Was that all?

Notes: This sketch uses the old Private Eye gimmick of reversing the roles in a news story, so rather than having Nigel Farage supposedly aping Hitler, it has a teenage Hitler adopting the mannerisms of the UKIP leader. I'm not equating the two parties, that would be stupid; the point of the sketch is the fraudulence of couching hideous ideas in avuncular language and misleading palliness. It's not a particularly original concept, but I was quite pleased with how it came off. The last line is a bit too broad and has no political bite, but at least possesses the element of surprise.

Sketch 2: I Have a Bloom 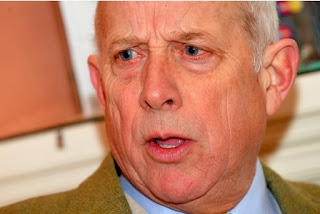 INTRO
UKIP MEP Godfrey Bloom went rogue - actually, stayed rogue - this week, carpet-bombing his own party's conference with his unique brand of 18th century sexism and pamphlet-based violence. Godders has form, of course, as this delve into the Newsjack Archives shows.

NEWSREEL-STYLE VOICEOVER
What looked like a potentially historic speech from Dr Martin Luther King, an address which could have given new momentum to the civil rights movement, was today spoiled by a dick in a UKIP tie.

Martin Luther King is giving his I Have a Dream speech.

KING
I have a dream that one day, down in Alabama, little black boys and black girls will be able to join hands with little white boys and white girls as sisters and brothers.

A voice cries out in dissent. It is Godfrey Bloom.

BLOOM
What a racist comment is that? How dare you! That's an appalling thing to say. You're picking people out for the colour of their skin. You disgust me.

BLOOM
You, sir, are a racist. I, for example, hadn't noticed that you were black, if indeed you are.

KING (trying to continue)
I have a dream today!

BLOOM (seizing the microphone)
Me too: I have a dream today, and it has three parts to it. Firstly, it's crucial that the space behind every fridge is perfectly and unaccountably clean - for some reason this seems to be of the utmost importance. Secondly, more gender-based profanity in the workplace, especially if the word you want to use had a different and very specific meaning some 300 years ago. And, thirdly, the severing of all trade links with Bongo Bongo Land, which for some reason I don't seem quite able to place in my British Empire atlas of 1848.

KING (trying to shout into the microphone)
I have a dream!

BLOOM
No, I have a dream, an exquisitely bonkers dream - and I've just thought of some more bits of it. Maternity leave should include a six-month jail sentence, mad bald men should be allowed to shoot journalists on sight, and anyone who changes pounds into Euros should be stoned to death.

KING
I have a dream!

BLOOM
As do I - Nigel Farage masks for all women!

KING (trying to get to the microphone again)
Free at last!

BLOOM
Yes! At last! Free healthcare for anyone earning over £100,000 a week, free housing for anyone with a second home in Corfu and free Wi-fi for life if you vote UKIP in 2015.

VOICEOVER
And so it was that Dr King surrendered his landmark address to beat Mr Bloom about the head with the text of his speech, to cheers from the crowd.

Notes: This one isn't as good (clearly). I was really pleased with the basic premise: that Godfrey Bloom's disingenuousness (and hilarious quotes) when dealing with Michael Crick would also apply to Martin Luther King's "I Have a Dream" speech, but I wasn't quite sure how to follow up on this, as you can see. Having Bloom take the microphone meant I could spoof his litany of ludicrous beliefs, but doesn't necessarily make any sense. The pay-off is a bit cheap, but that could have worked, I think. 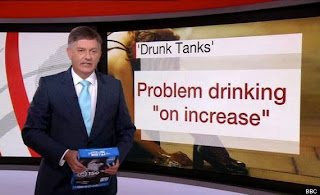 BBC presenter Simon McCoy baffled viewers by reading out the news whilst holding a packet of photocopier paper, which he'd mistaken for an iPad. His attempts to account for the mistake failed, as he tried to send a tweet on a calculator, conducted a phone interview down a banana and posted a letter of explanation into a man with high blood pressure who happened to have stopped on the street.

The iPhone 5 hit stores this week. With even the budget model priced at more than £450, it looks like this Mark Duggan inquest has come along at just the right time. 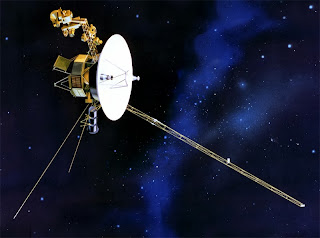 INTRO
This week, Voyager 1 was confirmed as the first ever to leave this lovely solar system of ours. Launched in 1977, the probe contains photos and music from Earth.

The sound of an explosion, followed by a man running and panting, then a knock on the door.

COMMANDER
What is it, Blerk?

BLERK (FEMALE VOICE)
This just fell out of the sky, sir. I think it's important.

COMMANDER
It doesn't look important, it looks like a birthday present strapped to a satellite dish on a tripod. Bring it over here.

Sound of paper being torn off the parcel.

COMMANDER
Good heavens, what's this? It appears to be a message from some sort of... primitive race. And they've printed out all the pictures onto glossy paper, like my nanna does. Look at their gargantuan sideburns, they look like they've got doormats glued to their heads. I don't think we'll be bothering to converse with them. And oh... oh, that's just revolting. This gentleman has put a safety pin right through his nose.

BLERK
There's something else in the envelope, sir.

COMMANDER
So there is. Oh... oh this is priceless - look at this, they're still using phonograph records. Do they think it's 1977? We should write back to them: "Dear puny Earthlings, we're coming to take your planet, please don't poke us with your bayonets. I'm worried that if we get on the wrong side of your president he'll batter us to death with his Betamax player."

BLERK
You never know, sir, it may be that this parcel has taken 36 years to arrive.

COMMANDER
I doubt that very much, Blerk - I don't think Earth will have privatised its postal system.

Notes: This was the first sketch I'd ever written, which is probably painfully obvious. It's pretty bland, though I was pleased with a few of the details (the joke about his nanna and the one about the president), and although the last line is a bit wordy and laboured, I did manage to give the sketch a point by tying together two topical stories.

One-liners: You're not seeing the one-liners, they were shit.
Posted by Rick Burin at 18:42