Tabu, Simone Signoret and a letter to Elia - Reviews #132 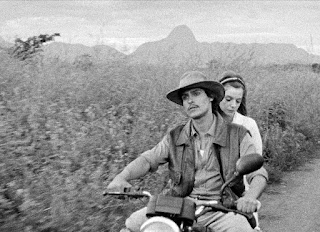 *SPOILERS*
CINEMA: Tabu (Miguel Gomes, 2012) – This intense, ambitious, sometimes whimsical fantasy – inspired by Murnau’s 1931 film of the same name – has incredible high points, but doesn’t manage to sustain that level throughout. After a short prologue, set in the early-20th century, which deals with a bereaved hunter leading an expedition, the film is split into halves. The first, Paradise Lost, takes place in present-day Lisbon and deals with a Catholic woman (Teresa Madruga) trying to save her neighbour, Aurora (Laura Soveral), from the ravages of madness – and possibly witchcraft. The second, Paradise, is set in Africa in the 1960s and concerns the young Aurora’s (Ann Moreira) illicit affair with a virile, moustachioed Italian (Carlotta Cotta). It’s an impossible film to categorise, with the same freewheeling air and fondness for an eccentric character trait that informed Julio Medem’s brilliant Lovers of the Arctic Circle: Madruga is being avoided by a Polish student who’s pretending to be her own friend, Soveral lost her money at a casino after a vivid dream about a half-husband half-monkey, Moreira has a pet crocodile – possibly a relation of the “melancholic” one in the prologue – and Cotta is the drummer in a swankily-dressed covers band, providing just some of the film’s jolts of Ronettes-themed joy. But you do sometimes get the impression – despite the film apparently bursting with ideas – that Gomes isn’t quite sure what it’s about, or doesn’t have a firm enough grasp of his convictions to carry them through.

Like Murnau’s film, Tabu has chapters called Paradise and Paradise Lost, is filmed in black-and-white and Academy Ratio, and deals – if only tangentially – with tribal customs. And, like Murnau’s movie, its central theme appears to be forbidden love: just like the virgin wed to the gods in the 1931 picture, so the flighty, married, preggers Aurora is “tabu”. But both halves of the film have strangely slow stretches, where the movie seems to be struggling to flesh out its slender narrative or get a handle on its subject matter. Then suddenly everything will click into place again, and Gomes will do something truly dazzling: a blast of Be My Baby, a lingering close-up, an erotically-charged sex scene, a bizarre diversion or some inspired bit of storytelling. Like the first time we see Moreira and Cotta together: an exhilarating, invigorating piece of virtuoso filmmaking – seen as if from afar, soundtracked only by wildlife – in which their mutual attraction is expressed through fleeting, then lingering glances. In a homage to Murnau’s film, Gomes opts boldly for a silent second half with sound effects, while adding a well-written voiceover. And he plays fast-and-loose throughout with the rules of filmmaking, allowing rain to cascade down the lens, showing ugly buildings reflected in ugly buildings or just having fun out on the road, as Cotta and his mate race across the fields in a riotous PoV shot. The story isn’t always as interesting as the way it’s being told.

Admittedly, the story isn’t always as interesting as the way it’s being told. It doesn’t all work, the clamour to hail it as the movie of the year seems a little misplaced, and it has several false endings – if the credits had rolled when Cotta sang harmonies on Be My Baby, tears rolling down his face, it would have been a much more satisfying movie – but it’s too original, exciting and unusual to miss. (3) 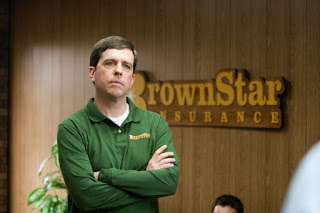 Cedar Rapids (Miguel Arteta, 2011) - A sheltered, polite insurance salesman (Ed Helms) leaves his small town to attend an important convention, after the firm's star performer dies during an act of autoerotic asphyxiation. There, he falls in with a boorish party hound (John C. Reilly), a free-spirited adulterer (Anne Heche) and a man who very much enjoys HBO's sprawling crime drama series, The Wire (Isiah Whitlock, Jr), and begins to doubt everything he's ever been told about life, love and the coveted "two diamonds" award - given each year to the most morally upstanding, god-fearing insurance company. This modern spin on little-guy-against-the-system Capracorn - complete with hundreds of sex jokes - is more intelligent and sweet-natured than you might expect (there's a gently subversive speech idealising insurance agents that's a little gem), but it's also rather underdeveloped and could have done with a script revision or 12. Arteta's handling is surprisingly conventional, given that he was behind the lively Michael Cera vehicle Youth in Revolt, though he does at least effectively evoke the apparent claustrophobia and inevitable heightening of convention life. The film's real selling point is the performances: Helms - who was fantastic in The Office but weak in The Hangover, a film I detested - is ideal in the lead, Reilly typically energetic with the shackles well and truly off, and Alia Shawkat (Arrested Development's Maeby) very appealing as a matter-of-fact prostitute, each of them giving the variable material a real shot in the arm. (2.5) 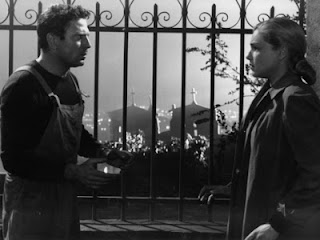 *SOME SPOILERS*
Thérèse Raquin (Marcel Carné, 1953) – This noir from the director of Les enfants du paradis and Le jour se lève is extremely well-acted, and blessed with both Carné’s remarkable sense of visual composition and his eye for an arresting effect, but it’s also very ponderous, and has a story that’s hackneyed and predictable to the point of being insulting. Simone Signoret is Thérèse, who’s tempted to abandon her unhappy marriage to the weak, sallow, callow Camille (Jacques Duby) after she meets hefty Italian lorry driver Laurent (Raf Vallone). If you can’t guess what’s going to happen next, you really should be watching more movies. The opening 40 minutes does an OK job of establishing the characters, and Signoret’s stifling world, but it’s only when the film gets on a train at night – a pair of noir staples – that it begins to move a little. The final hour isn’t top notch Carné, but it does have its moments, particularly after nightfall. There’s a great, gripping moment where Signoret fears for her future, and Carné throws in an “electric chair” effect: Thérèse repeatedly illuminated by a passing, rattling train – reminiscent of the “halo” near the end of Michael Powell’s A Canterbury Tale. But while the director has a lovely way of shooting – focusing on telling details, like the tinkling bells above a door prior to one of the film’s key moments – he always needed a good script (preferably from his great co-conspirator Jacques Prevert) and here he and Charles Spaak just aren’t up to it – even when drawing from an Emile Zola story. Still, the performances come to close to saving it. The uninspiring Vallone recalls brutish Maxwell Reed’s turn in Daybreak, to which the film bears some similarity, but the other three main performances are very interesting. Duby is good as a manipulative, malicious cuckold, Daniel Craig – sorry, Roland Lesaffre – offers excellent support as a confident, supercilious amateur blackmailer whose youth was trampled by war, and the mighty Signoret is spectacular in the title role – suffering in style, while displaying tenderness, fragility, and a core of steel. (2.5) 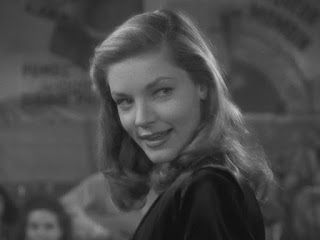 To Have and Have Not (Howard Hawks, 1944) – I saw this as a teenager, found the second half a bit boring and haven’t been back since. I might not have bothered with it again, but MovieMail asked me to review it. It’s undoubtedly Casablanca-lite, is rather lacking in story and has some notably un-special effects in the fishing sequence, but the Bogie-Bacall chemistry and William Faulkner’s dialogue are sublime, and there’s another in an endless list of fine supporting characterisations from Walter Brennan. Great fun; one wonders what else the teenage me got disastrously wrong. I’m not submitting this review, this is just a précis. (3.5) 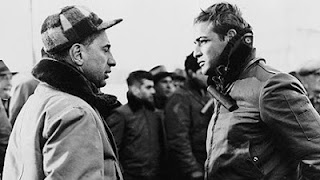 A Letter to Elia (Martin Scorsese and Kent Jones, 2010) – Excellent, personal documentary about Scorsese’s connection with Kazan, the remarkably gifted director who revolutionised the nature of screen acting, brought a new realism to American cinema, but sold out his mates to the HUAC. It’s full of brilliant (though spoiler-heavy) clips from throughout Kazan’s career, placing particular emphasis on East of Eden, On the Waterfront and America, America, and for once Scorsese’s need to put himself front-and-centre in these documentaries on cinema works in the film’s favour, as he articulates a touching, intense affinity with these films about flawed people, and with the flawed person who made them. (3.5)
Posted by Rick Burin at 17:55