Plus: fire, funnies and Alice Faye, in our latest reviews round-up. 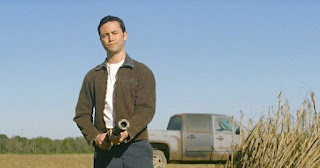 *MAJOR SPOILERS*
CINEMA: Looper (Rian Johnson, 2012) – 2012 has been the year of hype, with unprecedented amounts of hoopla around movies like Avengers Assemble and The Dark Knight Rises – which are apparently two of the BEST FILMS EVER – and Prometheus, which was supposed to be one of the best films ever, but unfortunately turned out to be THE WORST FILM EVER. About the only blockbuster that hasn’t been hyped to death is The Amazing Spider-Man, which was actually really strong. Looper is another disappointment. It’s not a bad movie – it has a lot to recommend it – but it’s also not a particularly good one. That it’s not in the same league as Brick is fine; that it’s probably not as good as The Brothers Bloom is not.

As you may be aware, Joseph Gordon-Levitt is a looper (not in real life, in the film) – paid by a criminal gang to kill and dispose of people sent back from the future, who arrive bound and with a sack on their head. When his future self (Bruce Willis) is sent back for the looper treatment (without a sack on his head), Gordon-Levitt is forced to track down the bald idiot, while being pursued himself by his former employers. The first 50 is very impressive, with Johnson traversing the noir territory he mined so successfully in Brick, and conjuring a grungy, ugly future world that’s an interesting companion piece to the future-noir universe of Blade Runner. A terrific first-person voiceover plants you right in the middle of things, and the dialogue sings. Johnson serves up a pair of brilliant two-handers featuring Gordon-Levitt. The first sees him enduring an interrogation by beardy boss Jeff Daniels (recalling the pair’s work in the spectacular Scott Frank film, The Lookout); the second has him facing down Willis in a diner – something like how the famous De Niro-Pacino scene in Heat should have played out, if it wasn’t rubbish. But then the film starts to lose its way: the pacing seems off, the concept of muddy, organic time-travel – while great in theory – doesn’t really work, as it’s too confusing, and the movie decides to decamp to the countryside to meet Emily Blunt.

Noirs have wandered off to the country before – Nicholas Ray’s On Dangerous Ground spent most of its time there – and sometimes it works. But here it’s just not a very interesting diversion, accompanied as it is by an unimaginative, wearisome subplot about telekinesis. The film seems to get lost out there on the farm, with nothing happening at the intensity it should do: the acting, the action, the human drama. It seems to have an almost fatal absence of heart and, when persuading us who to root for, bizarrely sends Willis off to shoot some kids; apparently a suggestion by some of Johnson's screenwriter buddies. Gordon-Levitt is quite good but, essentially asked to do an imitation of Willis, he’s hamstrung by a weird mix of make-up and CGI that makes him look melty and computer-generated, hampering his strong suit of subtle expressiveness. Mickey Rourke was able to blast through the prosthetics in Sin City, but he’s a hulking great lunk whose strengths lie in throwing his whole body into a role. Gordon-Levitt isn’t like that. He’s also having to play a young version of a poor actor. Obviously he’s better here than Willis (whose career consists of a good performance in Twelve Monkeys and being well-cast in Die Hard), but it’s still hard to be impressive when you’re having to ape someone’s annoying, shallow mannerisms. Whenever Daniels appears, following his amazing introduction, it's just to shout very loudly for five seconds, before disappearing again.

Somehow, at the end, Johnson drags it back, with an ending so slick, affecting and effective that it’s like peak-form Christopher Nolan just popped his head into the editing suite. Or the Johnson of 2005 turned up. The voiceover kicks back in, Gordon-Levitt ups the dramatic ante, and the film’s threads and themes congeal into something very satisfying. But, ultimately, it’s not nearly enough, though you wouldn't know it switch on your computer. So yes – the year of hype. Or maybe I’ve just been on Twitter more. (2.5)

You can listen to Johnson's Looper commentary here. It's very interesting, regardless of how fully you bought into the movie.
*** 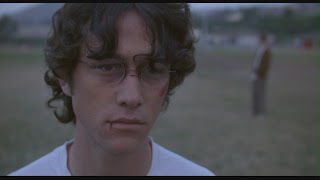 “I’ve got all five senses and I slept last night – that puts me six up on the lot of you.”
*SOME SPOILERS*
Brick (Rian Johnson, 2005) is one of the best films of the last decade – and one of the great debuts. An eerie, unsettling and upsetting high school noir, complete with five minutes of wall-to-wall hilarity in its mid-section, it’s a one-of-a-kind movie, with one of the great scripts, and one of the great performances. Joseph Gordon-Levitt is Brendan, a tousle-haired teenager and archetypal loner who stumbles into his school’s teeming, rancid underbelly while investigating the murder of his ex-girlfriend (Emilie de Ravin). Having duffed up a toga-wearing jock in a car-park, Brendan comes to the attention of “old, like 26” heroin dealer The Pin (Lukas Haas) and his hair-trigger accomplice, Tugger (Noah Fleiss), all the while sparring with possible femme fatale Laura (Nora Zehetner).

Snappily shot and sumptuously-scripted, with a lingo-heavy language that’s all its own, and an effortless grasp of when to wink and when to play it straight, Brick builds to a gutting, unforgettable pay-off that bears some resemblance to The Maltese Falcon’s clincher – albeit relocated to a high school football field – but in its offbeat, horrifying destination is perhaps more similar to another spiritual predecessor: Robert Parrish’s Cry Danger. Gordon-Levitt, who is simply the best actor working today, is astonishing as the unhappy, sardonic, deceptively tough protagonist playing all ends against the middle, impressively supported by the enigmatic, creepy Haas, Looper’s Noah Segan and a largely unknown ensemble. Johnson’s next two haven’t delivered on Brick’s promise, but let's just let him keep going: this cast-iron masterpiece is too damn perfect to have been a fluke. Just like its hero, it'll take some beating. (4) 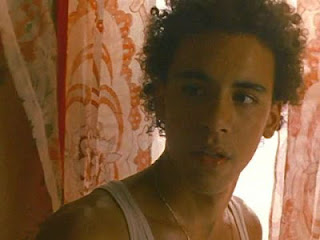 Raising Victor Vargas (Peter Sollett, 2002) – An authentic, immersive and charming inner-city indie about a self-proclaimed teen lothario (Victor Rasuk) who falls for a girl clearly out of his league. The basic story may recall John Sayles’s classic teen drama, Baby It’s You, but this is a less stylised, more earthy affair: a rich portrait of immigrant communities, shot through with affection, humour and a genuine humanity that makes you appreciate the wildly differing viewpoints of its many characters, from the alleged stud to his insecure girlfriend, conflicted younger brother and outraged, religious grandmother, who’s reaching the end of her tether – and sounds quite a lot like a cartoon character. The film has a unique atmosphere, Sollett immersing you in a fully-realised, insular world, aided by Tim Orr’s stunning close-up photography, and uniformly fine performances from the no-name cast. It's one of the best I’ve seen this year. Sollett went on to make Nick and Norah’s Infinite Playlist. Quite why is anyone’s guess. (4) 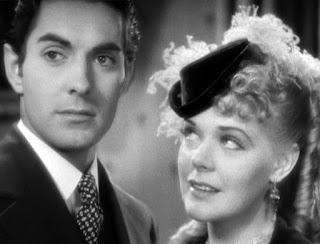 *MAJOR SPOILERS*
In Old Chicago (Henry King, 1938) – Fox’s answer to San Francisco – the MGM film about the 1906 earthquake that was one of the ‘30s biggest successes – is a superficial but entertaining disaster movie that climaxes with the 1871 Chicago Fire. Tyrone Power is a roguish gambler and saloon-keeper who embodies the city’s shady side. Alice Faye is his long-legged business partner – showgirl Belle Fawcett – Don Ameche plays his brother, a straight-arrow lawyer, and Alice Brady is their mum, apparently winning her Oscar for a single poignant expression during a victory parade, because that’s the only bit of acting she does in the picture.

The story is a bit corny and predictable – cribbed largely from San Francisco, right down to a dirty-faced Power, tie-undone, wandering through the rubble in a daze – but there are compensations. The opening shot is a beaut, there are a smattering of memorable lines courtesy of co-writer Lamar Trotti (who did Judge Priest and Young Mr Lincoln for Ford), the three leads are good (especially Faye, who also sings a bit), and the action climax – directed by Charlie Chan regular H. Bruce Humberstone – is extremely well-executed. It's wrapped-up with a very moving reunion, and then an unintentionally hilarious final line from Brady. “We O’Learys are a strange tribe… and what we set out to do, we finish,” she says, as the camera cuts to the smouldering remains of the city of Chicago.

The film has lost 20 minutes from its original roadshow print, so some plot strands don’t go anywhere, and the whole things feels too slight; there’s a scene in the trailer that’s not in the available print that’s integral to the brothers’ relationship. “When we were kids, we were always fighting,” Power says. “But I bet if any others Irishers tried to horn in, it was the O’Learys against the world,” Faye replies, foreshadowing the climax. It's a shame that was lost. In Old Chicago isn’t as good as San Francisco, or Fox’s The Rains Came – featuring Myrna Loy’s best dramatic performance – but it’s an effective, if unexceptional entertainment. (2.5) 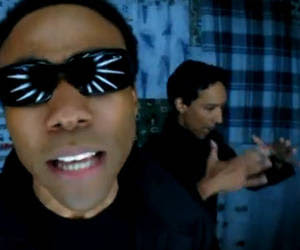 Community (Season 3, 2011-12) – It may not be as amazing as the first two seasons, but this third outing for the students of Greendale Community College is still great fun. The highlights are the third episode, with its dizzying treatment of alternate timelines, and the Christmas special: an unbelievable 21 minutes of musical entertainment – imaginative, tuneful and slyly subversive. Alison Brie ending a sexy Santa dance with the words “Boo boo be doo, sex” may be the funniest thing I’ve seen on TV this decade. Elsewhere, the air conditioning subplot has one line of absolute beauty (“I want to eat space paninis with black Hitler!”) but comes off as forced and Coens-lite, Pierce's dad is more unpleasant than funny, and both the first episode and the asylum one are just a bit... rubbish, but this remains one of the sharpest, most original shows on TV, with a killer ensemble. Who knows what the post Dan Harmon-era will bring? (3.5) 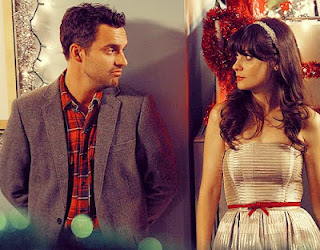 New Girl (Season 1, 2011-12) – I enjoyed this from the start, but then the strangest thing happened... it actually went good, with involving storylines, some fun improvised gags and a collection of strong characters – particularly Nick, who becomes unstoppably hilarious at the exact moment the writers decide to stop treating him as a love interest in waiting. Every so often there’s a mystifyingly weak, laughless episode (the one where Schmidt undergoes a personality change, for example) – and it’s clearly not as clever or groundbreaking as Community – but I just really, really like it. Hopefully Lizzy Caplan and Justin Long will return. They’re funny. (3.5)
Posted by Rick Burin at 17:34