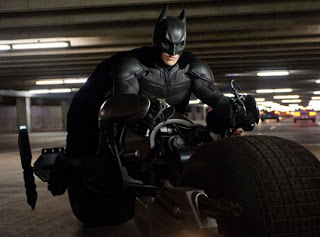 *SPOILERS*
The Dark Knight Rises (Christopher Nolan, 2012) - Patrick Batman (Christian Bale) has spent eight years in hiding. Confined to the east wing of Bat Towers and reduced to resting on a walking cane, he's forced to come out of retirement so he can be really badly beaten up by hulking, masked former mercenary Bane (Tom Hardy), who has designs on a nuclear bomb. The film does a good job of reducing Batman to nothing: robbing him of his wealth, his hero status, his health, his stoutest ally (Michael Caine) and finally his freedom, but then isn't quite sure what to do next. The script has moments of profundity - particularly the "Not everything; not yet" exchange so nicely used in the trailer - but the whole thing sags under the weight of its self-importance, and has some strangely weak dialogue ("I needed you for your infrastructure," the psychotic Bane tells a redundant pawn, declining to add: "Now we've streamlined the operation, your resources are superfluous"). That's when you can tell what anyone is saying, which is about 30 per cent of the time, thanks to the pounding music, some ridiculous accents, and Bane's Vader-esque muffler. The bits where indecipherable Russian-Connery Hardy and Batman Voice are shouting at each other are just too funny to carry much import.

The film is rarely boring (though I think I have a far lower tolerance for vehicles chasing other vehicles than most people), and it has a few nice set-pieces - particularly the Star Spangled Banner bit, which is so pictorially impressive and full of conviction that it overcomes the slightly trite concept - while there's a good performance from Caine, a surprisingly lively one from Anne Hathaway (as the perma-quipping Catwoman) and a superb characterisation from Joseph Gordon-Levitt, playing a loyal, troubled cop, whose early heart-to-heart with Bats is easily the best scene in the movie. But the film is sloppily plotted - the relationship between our hero and would-be girlfriend Marion Cotillard is negligibly developed, the detonator concept doesn't make much sense, and Nolan's twist-itis is undone by a rug-pull that's just not very interesting - and it's not sufficiently different to The Dark Knight, with the exception that Bane lacks the mercurial charisma of Keith Ledger's Joker, and Bats spends much of the film off-screen or down a hole. All this is irrelevant, of course, as IMDb and the emerging critical consensus is showing, but I just don't understand why this film or its predecessor have the reputation they do, unless you're just a huge fan of extreme humourlessness and vehicles with fat wheels. The Amazing Spider-Man may lack this film's crashing sense of portentousness, but it's a far more coherent, engaging and exciting movie. (2.5)

(Please note: I do know that Heath Ledger isn't called Keith, but one of my friends thought he was, and the idea is too funny for me to let go.)
Posted by Rick Burin at 21:42