Buster, Bogart and idolising New York City out of all proportion - Festival blurbs

The World's Smallest Film Festival took place at Rudding Park, near Harrogate, on Sunday. Myself and Harrogate International Festival programme co-ordinator Graham Chalmers picked the six black-and-white movies: Sherlock, Jr was my choice, The Artist was his, and the other four emerged from a 10-minute discussion in the work canteen. For the programme, he penned blurbs about The Thin Man, Les Quatre cents coups and The Artist, while I wrote the other three, which I thought I might as well peg up here. 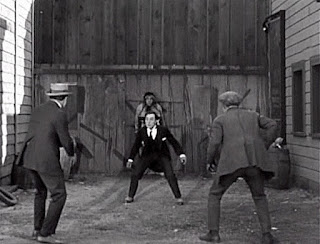 Sherlock, Jr. (Buster Keaton, 1924, 45 min) - A cinema projectionist (Buster Keaton) falls asleep on the job and dreams of being a brilliant detective – entering the screen itself to solve a jewel theft – in this groundbreaking comedy. Having served an apprenticeship under "Fatty" Arbuckle, Buster branched out on his own in 1920, unleashing a succession of dizzyingly inventive shorts that blended technical wizardry (The Playhouse saw him play no fewer than 25 parts) with devilishly clever incidental gags and astonishing stuntwork. He made his first feature in 1923 and reached his creative zenith the following year with Sherlock, Jr, a 45-minute comic masterwork that begins with whimsy and wonder, toys with the very nature of cinema and climaxes with some of the most extraordinary physical feats ever attempted on screen. Having been tossed around a vaudeville stage by his parents from the age of three, Buster was – in the modern parlance – as hard as nails, and when the water tower opens on him, you are watching a man having his neck broken. He didn't notice until the 1930s. Sherlock, Jr influenced the surrealists and formed the template for Woody Allen's classic 1984 film, The Purple Rose of Cairo, but, more importantly, it's a rollicking good ride, and still feels remarkably fresh and modern almost 90 years on.

(PS: When @Silent_London recently asked followers to nominate their favourite silent comedy, I sent this tweet, which, to my delight, they read out on this superlative podcast.) 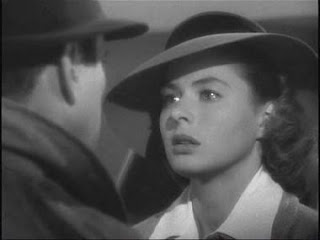 Casablanca (Michael Curtiz, 1942, 102 min) - Casablanca is a great advert for chaos. Its script was still being written as it was filmed, it came in $100,000 over budget and Warner belatedly decided to re-shoot all the scenes featuring As Time Goes By, only to find that they couldn't, as Ingrid Bergman had cut her hair. Now regarded as the definitive screen romance, it's a vivid, unforgettable and lushly-shot film (think of the tears shining in the leading lady's eyes) that sees bar owner Humphrey Bogart, ethereal Norwegian Bergman and resistance leader Paul Henreid play out a love triangle in the titular city - which is increasingly overrun by Nazi forces. The leads are sublime, just about every line of the wise and witty script has echoed down the years and there's perhaps the finest supporting cast ever assembled for a film, from Claude Rains and silent movie legend Conrad Veidt to Peter Lorre, Sydney Greenstreet, John Qualen, Dooley Wilson and S.Z. Sakall. All together now: "You must remember this..."

Manhattan (Woody Allen, 1979, 96 min) - There are some sublime moments in Annie Hall, but really it's a bit of a mess. It was from 1979 that Woody Allen began firing on all cylinders, making a successful transition from those "early, funny films" (his words) to more thoughtful, affecting fare, and embarking on a devastating purple patch largely unrivalled in the history of American writer-directors. Surely only Buster Keaton or Preston Sturges have ever close to matching Allen's 13 years of unbroken brilliance, taking in films like The Purple Rose of Cairo, Hannah and Her Sisters and Crimes and Misdemeanours. Manhattan, with its gorgeous black-and-white cinematography (spotlighted in that classic planetarium set-piece), wonderful Gershwin score and climactic concession to subtle sentimentality, is one of his most distinctive and appealing movies, tracking the romantic entanglements of a group of New York intellectuals (surely not!) in characteristically sure-footed and amusing style. There's a knockout of a supporting performance from Mariel Hemingway – playing Woody's 17-year-old girlfriend – and it all builds to a typically inspired pay-off. Just lovely.
Posted by Rick Burin at 20:33