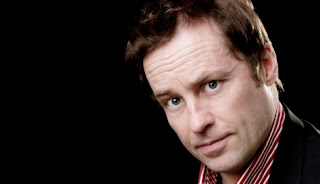 Ardal O’Hanlon is pretending to put his leg in the Large Hadron Collider.

And, for just an instant, he morphs into Father Douglas Maguire, the endearing, enduring innocent he played in sitcom Father Ted.

This is the first time the comic has played Harrogate and he starts in style, encouraging two lengthy ovations.

Then he makes a few latecomers repeat the exercise, before claiming that everyone else has already done an impression of a bear.

Strolling confidently around the stage, he reveals he was named after the scene of an industrial disaster, saying his brothers are called Chernobyl and Hiroshima. And Wetherby.

A group at the back shout their disapproval.

“Ah, ” says O’Hanlon. “Maybe I should have picked somewhere further away.”

The economic climate has impacted on everyone. O’Hanlon says he’s had to outsource his joke-writing to India - and a chap named Sanjeev.

“Most of my current material is about arranged marriages and the perils of bathing in the Ganges, ” he says.

This proves to be untrue.

Instead, he focuses on sex, family and the oddness of Ireland, while touching on such diverse topics as DIY (“I need a man in my life”), fictional pals (“My imaginary friend had an imaginary friend who was a real person. He was a lad in my class at school”) and murderers (“They’re awful eejits, wearing jumpers on their heads. The time to wear a jumper on your head is when the police are looking for you”).

There’s a dark streak a mile wide running through O’Hanlon’s show, but it never feels forced or overbearing, because of his offhand, engaging manner.

And every so often he corpses, which just adds to the fun.

He’s tried living every day as if it was his last, “in bed with an oxygen mask and a bedpan”.

With his brothers, he’s had to decide what to do with their ailing mother. “Ever since the accident, she spends the whole day looking through the window. I wanted to let her in, but they where having none of it.”

“I don’t know why that’s funny, ” O’Hanlon deadpans. “That Sanjeev is sick.”

Moving on to bedroom matters, he says he’s always had trouble with bras, leading to more difficulties than you might think. “Sometimes my wife slings a bra across the front door and I can’t even get in the house, ” he says.

He recalls his father teaching him about the birds and the bees, coughing nervously for an age, before blurting out: ‘You know girls don’t have willies.’

“To this day I still associate sex with tuberculosis, ” he says.

Now he has kids of his own. At first he wasn’t keen on the idea.

The experience has left him confused. Children change all the time. He slips into a bass voice to impersonate his son on the answerphone: “There’s nobody here now, I’ve got them in a bag.”

He continues to attract adversaries. He recently asked an overweight woman: ‘When are you due?’

“Then I realised she wasn’t pregnant, so I added: ‘another snack’. Got myself out of that hole.”

Now scandals in the Catholic Church have left him in a tricky position.

“You can’t even admit to being a fictional priest anymore, that’s what I find, ” he says.

It’s only when he mimes sticking his hand, leg and some Maltesers in the Large Hadron Collider that we see a trace of the mischievous, guileless Dougal.