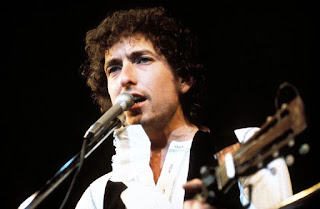 "Don't have the inclination to look back on any mistake,
Like Cain, I now behold this chain of events that I must break."

The problem with Dylan's immediately notorious sojourn in evangelical Christianity wasn't that he was failing to give fans what they wanted − when has that honestly ever been the point of Dylan? − or that he'd sold out those earlier ideals: if you could stomach him ripping the piss out of your revolution for much of 1964-6, then surely you could accept him bigging up The Big Man. It was that most of the music was terrible.

The tunes were risible, the vocals largely lifeless, and the words worse, often consisting of him simply paraphrasing the Bible. The genius who at 24 wrote, "Inside the museums, infinity goes up on trial/Voices echo this is what salvation must be like after a while" was now so myopically committed to his newfound faith − and to his thoroughly questionable way of proselytising about it − that he seriously put out a song that goes like this:


Jesus said, "Be ready,
For you know not the hour in which I come."
He said, "He who is not for Me is against Me,"
Just so you know where He's coming from.

Yes, OK, he did say those things, but is that the point?

There are lots of good songs about God, like 'Be Thou My Vision' and 'Down There by the Train', but for much of this almost self-parodic diversion, Dylan didn't seem to know how to write one. For a man who had dismissed his Civil Rights-era anthems as 'finger-pointing songs', he was suddenly doing a lot of finger-pointing, and the results were, almost without exception, deadening. Slow Train Coming has just the funky 'Gotta Serve Somebody' and some vocal sensitivity on the closing number ('When He Returns') to recommend it. In 'Man Gave Names to All the Animals', the bloke who wrote 'Love Minus Zero' appeared to have lost not just his talent but his mind, memorably describing a bear as having a "great big furry back and furry hair", which − while broadly accurate − is one hell of a drop-off. Dylan's follow-up record, Saved, is an album so utterly devoid of empathy and sensitivity it makes the Louvin Brothers sound like, well, Jesus.

All of this − this whole tone-deaf, three-year exercise in one-dimensional, closed-minded, redundant didacticism − is justified by 'Every Grain of Sand', and its 'still small voice of calm', to borrow a line from another great hymn. Gone is the surety and the intolerance of those previous two records, replaced by tenderness, solace and, yes, doubt: a doubt that renders Dylan human and his message divine. He's not calling on you to repent now, or describing a sheep, he is instead content, trading his pain and anger for both beauty and humility ("In the fury of the moment, I can see the master's hand," he sings in the first chorus. "In every leaf that trembles, in every grain of sand.")

As the song nears its close and his voice climbs towards an apparent climax, fittingly you'd be forgiven for fearing the worst. "I hear the ancient footsteps like the motion of the sea," he intones, perhaps on his way to a little fire and brimstone − but this time there's no certainty, simply honesty: "Sometimes I turn, there's someone there," he says, "other times it's only me." And by the time the song had gone from doggy demo (there is literally a dog woofing on the demo) to final version, he had gone further, no longer hanging in the balance of "a perfect finished plan" but in "the reality of man", a critical adjustment that underlines something crucial. That this quiet, gentle song, Elvis Costello's favourite of Dylan's back catalogue, and the most peaceful in his entire oeuvre, is also one of his most personal. And that he is a part of creation, not some avenging angel.

When Dylan went Christian, he became essentially uninteresting, aside perhaps from the sheer novelty of Dylan going Christian. And since I'm Catholic and still an absolutely scintillating personality, I can only assume that's because of how he did it. From The Freewheelin' to Modern Times, Dylan has always stolen (and sometimes, like when he stole from a still-recovering Nic Jones, that was Not OK), but when he took the tune of 'Nottamun' Town for 'Masters of War', he was acting in the folk tradition; when 'Where the Blue of the Night' became 'When the Deal Goes Down', he was stretching back to the Great American Songbook and signposting where he'd (unwisely) be going next; and, in both songs, crucially, those earlier inspirations were merely springboards for new explosions of creativity. There is nothing distinctive or creative about his use of other texts in the first two Christian albums: what we have here is more like a Body Snatchers situation, in which he is the unthinking mouthpiece for someone else's ideas, regurgitated wholesale. (The only difference I can think of is that the Body Snatchers didn't have a glossy funk-rock ensemble featuring Mark Knopfler on lead guitar.)

'Every Grain of Sand' is the sound of Dylan rejoining both the artistic community and the human race, as he mixes Blakean imagery that conjures incalculable size through its intimate focus, with a vulnerability, even fragility, revealed so rarely in Bob's work. "The sorrow of the night", "the bitter dance of loneliness" and "the broken mirror of innocence", though, are no match for his faith, which you sense is stronger now that he can admit he only has some of the answers, only some of the time.

"My patron saint's off fighting with a ghost, he's always off somewhere when I need him most."

In July 1975, Dylan drifted into a Ramblin' Jack Elliott set at The Other End in Greenwich Village, consented to play on a couple of numbers, and then started singing something of his own. Joe Kivak was there: "After a couple of lines, we realised he was performing a new song, with each line getting even better than the last ... it still is the most powerful performance I've ever heard." The bootleg recording is pure lightning-in-a-bottle stuff: Dylan in an emotional trough but at a creative zenith, singing, heartbroken but clear-eyed, for a handful of people in a tiny club about the breakdown of his marriage. When he says simply, "Wherever the children go I'll follow them," you're not sure if he's referencing Nights of Cabiria, the Bible or just the fact that he might not see his kids any more. Dylan had form in reducing audiences to rubble, but to tears? Not so much.

The song is, I suppose, the final part of a trilogy which began with the hypnotic, endless 'Sad-Eyed Lady of the Lowlands' (1966), and continued in a more literal form with 'Sara' (1976, but written earlier), combining the lyrical preoccupations of the Blonde on Blonde era (where "gods are dead" and "queens are in the church") with the burgeoning Tex-Mex theatricality of Desire and a devastating emotional sincerity that rears its head but rarely in his work. By the time Dylan got around to recording it later that month, he had managed to strangle it in glib, jaunty, violin-led full-band pointlessness, its poetry evaporating on impact. It was ultimately chopped from the record in favour of 'Joey', a shallow hymn to a mobster, and the only version in public circulation is the studio one, released on Biograph (1985) and later Side Tracks.

Perhaps playing it as he did at The Other End was just too painful. It has its allusions but they're always in service of a bracing directness. The song is, in the modern parlance, 'relatable'. It's definitely the most I've ever got out of a man telling me about his divorce.