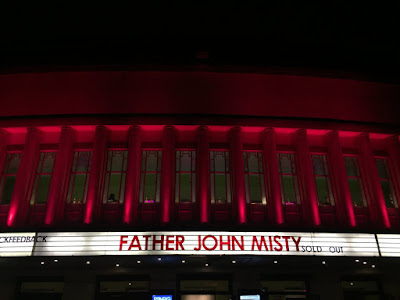 I’d listened to Father John Misty a little and dismissed him as “not really for me” (I reasoned that I didn't have room for a whiny, self-obsessed white man in my life aside from myself), but my brother and my friend Katie wanted to go, so I took the plunge. In revising for the gig, my Last FM (helloooo, 2003) tells me that I’ve listened to his songs 151 times in the past week, and by the end I was brainwashed. Sorry, ‘a fan’. And even his proselytising about the evils of religion, which seemed to be operating at the level of a GCSE textbook, began to make sense to me (a Catholic) when I read about his background, and understood the writing to be more about white-hot anger, lived experience, existential desperation and the repugnant hypocrisy of evangelist America than in-depth theological debate.

From interviews – and reputation – though, I was still expecting the morose, meandering, confessional Misty who turned up to a gig the day after Trump’s inauguration, did a rambling 15-minute speech, played a 13-minute song and then went home. Instead, we got a proper pop show: a sensational pop show – 24 songs across two hours, with confetti cannons, a band and a string and brass ensemble, a dazzling light display and Tillman’s full repertoire of struts, poses and guitar moves (and when I say ‘guitar moves’, I don’t mean his guitar-playing, I mean him taking his guitar off and flinging it halfway across the stage to a roadie, mid-song), but with enough room for the sincerity, the lamentations, the howls of protest and shards of bitter wit that make him one of the most distinctive voices in contemporary music.

There's almost no between-songs chat (a few 'thank you's and 'good to see yer's), it's just the music: the bearded Tillman, his hair slicked back, in a flowery shirt and black suit, his drainpipe trousers accentuating his slender legs, and the heeled boots just right for cutting a dashing silhouette as he's frequently backlit in a mist of pink or codeine white.

We kick off with 'Pure Comedy', climaxing with that explosive realisation that religion is "the kind of thing a madman would conceive!”, complete with panto-esque ‘loony’ gesture, 'Total Entertainment Forever' – an irresistible, rockabilly paean to just how fucked we are – and 'Things It Would Have Been Helpful to Know Before the Revolution', most people’s favourite on the album. I’m still wrestling with the song’s philosophy (is he foggily denouncing leftism or acerbically critiquing the comfort of capitalist conformity?), but it’s a definite Tune, and when the confetti cannon explodes on “Industry and commerce: toppled to their knees”, creating a red, mirrored supernova, everybody loses their shit. After a somewhat muted 'Ballad of the Dying Man' (and so the first four songs from the current record), we dip into the old stuff, including a plaintive, insistent, seductively reimagined 'Nancy From Now On', a lovestruck, crowdpleasing 'Chateau Lobby #4' (“You left a note in your perfect script/’Stay as long as you want’/And I haven’t left your bed since”) with Tillman striding around the stage like a Butlins redcoat, and a conversational 'When the God of Love Returns There’ll Be Hell to Pay', as he has a few choice words with his maker. The pay off, “Oh, my Lord/We just want light in the dark/Some warmth in the cold/And to make something out of nothing sounds like someone else I know” sounds like vintage Vonnegut in the land of Steinbeck, and I don’t have higher praise than that. 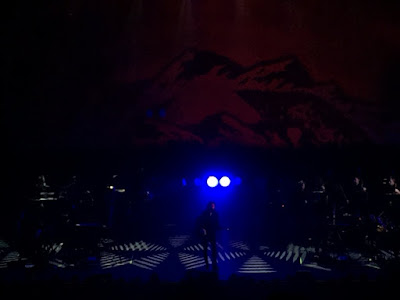 I didn't spend much of the gig taking pictures. Will this do?

There are Misty songs I don’t like much, and if a couple of them are banal live – ‘A Bigger Paper Bag’ and the interminable ‘So I’m Growing Old on Magic Mountain’ – others are given an individuality missing on record, and extraordinary life. ‘Only Son of the Ladiesman’ is chokingly broken amidst the country-rock sound, ‘This Is Sally Hatchet’ becomes a great lost Beatles song, ‘When You’re Smiling and Astride Me’ so fragilely self-mocking, and ‘Strange Encounter’ sensitive and vulnerable as it moves from Misty’s familiar boasting that he has sex with a lot of women to something like tentatively self-justifying self-realisation ("Yeah, I'm a decent person/Little aimless"), the perfect counterpoint to the disposable fun of, say, ‘I’m Writing a Novel’. 'Nothing Good Ever Happens at the Goddamn Thirsty Crow', by contrast, is an absolute bastard live: a sleazy love poem that turns increasingly belligerent and violent, with Tillman spitting its bitter denouement, "Why the long face, jerkoff? Your chance has been taken," into the crowd.

And then there are the songs I can never get enough of, like ‘The Night Josh Tillman Came to Our Apt’ – basically his ‘Idiot Wind’, a character assassination of a woman he’s just slept with, which would be completely indefensible if it wasn’t so beautifully, rhythmically sung, and so incredibly funny:

She says, like literally
Music is the air she breathes
And the malaprops make me want to fucking scream
I wonder if she even knows what that word means
Well, it's literally not that

And ‘Bored in the USA’, a chronicle of depression, a portrait of a wasteland of a homeland: America’s culture reimagined alternately as The Road, or as a tacky, narcotised, identikit, subprime, debt-ridden monument to nothing, guarded over by white president Jesus – the whole song springing from a profound pun for the ages. Tonight, though, the “white Jesus” that he pleads to becomes “honky-tonk Jesus’”, and the President Jesus just “President Anyone”. ‘The Memo’, one of the best songs on his current record, Pure Comedy, is mostly more pointed than despairing, and its targets are more specific and less existential, though its conclusion is similarly bleak, depicting a world in which people “won't just sell themselves into slavery/They'll get on their knees and pay you to believe”. Live, it comes with its wild card intact: a voice generator increasingly barking out mundanities and platitutdes: “This is totally the song of my summer,” “This guy just gets me” and “Music is my life”, as Tillman himself asks: “Just quickly, how would you rate yourself in terms of sex appeal and cultural significance?” “Do you usually listen to music like this?” and finally “Can we recommend some similar artists?” All three songs are just wonderful live – faithful but raw and immediate – though screening the video for ‘The Night…’ was kind of pointlessly distracting.

The main set ends with ‘Hollywood Forever Cemetery Sings’ and then a climactic ‘I Love You, Honeybear’, a rousing, glorious version that catapults it high into my favourite Misty songs, with Tillman making his second foray into the crowd, playing both the woodland indie messiah and the pop god, as the confetti flies and the singer performs the laying on of hands, as he pleads: “Don’t give into despair/Cause I love you, honeybear.”

What I loved – and what most surprised me – about the show was how much thought, effort and enthusiasm had clearly gone into it: into the choreographed stage moves (though never so choreographed that there's no room for him to extemporise as he's swept away by emotion), the lighting that creates an icon out of his silhouette, the reshapings of older songs. Tillman’s distaste for the entertainment industry doesn’t translate into a contempt for his fans, as it does with so many artists. As a mentally ill bloke myself, I can understand that sometimes his interviews are car-crashes, and that he has good gigs and bad gigs. I know too, of course, that it need not necessarily constitute an enormous challenge for a man to behave nicely towards a roomful of people who adore him and his art. But I’d thought of him as probably being a bit of a dick, and that didn’t come across at all. He even did an extended encore: ‘Real Love Baby’ – which is pleasant, but could have been written by anybody – and the tedious ‘Magic Mountain’ followed by something extraordinary: his shopping list of contemporary ills (some real, some imagined), ‘Holy Shit' incorporating a mid-song freak-out and seguing straight into an explosive, furious grunge version of the waspish, self-annihilating character study, ‘The Ideal Husband’, which ends with him lying on his back on the stage, writhing around on the floor as he screams: “Wouldn’t I make the ideal husband?” Yes, Josh, you probably would.

One of the gigs of the year. I’m a fan now. A convert. I left the Apollo moved and exhilarated. Speechless. I’m glad I took up that ticket offer.

Pure Comedy
Total Entertainment Forever
Things It Would Have Been Helpful to Know Before the Revolution
Ballad of the Dying Man
Nancy From Now On
Chateau Lobby #4 (in C for Two Virgins)
Strange Encounter
Nothing Good Ever Happens at the Goddamn Thirsty Crow
Only Son of the Ladiesman
When the God of Love Returns There'll Be Hell to Pay
A Bigger Paper Bag
When You're Smiling and Astride Me
True Affection
This is Sally Hatchet
The Night Josh Tillman Came to Our Apt.
Bored in the USA
The Memo
I'm Writing a Novel
Hollywood Forever Cemetery Sings
I Love You, Honeybear

(Source, as ever, setlist.fm)

I'm only really reviewing movies now (and only here), but last night had such an impact on me that I thought I'd write a little about it. Thanks for reading.
Posted by Rick Burin at 13:14