More tales of sitting in a darkened room, with your host, R iCk bURi

N please. proofread this someone thank$ 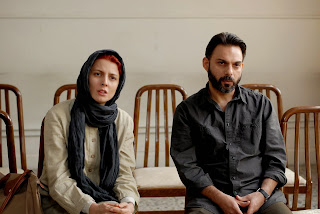 A Separation (Asghar Farhadi, 2011) - An Iranian couple, refused a divorce by the local magistrate, instead begin a separation, setting in chain a series of tragic events that leaves no-one in their vicinity uninjured and untainted.

This bristling, brilliant drama is bleak as hell but simply one of the best movies of recent years, offering rich characterisation, a vivid portrait of Iran's religious, male-dominated society, and a gripping, revealing and constantly surprising narrative that throbs with anger and anguish as bitter recrimination consumes its protagonists, colouring them in the eyes of their children, fast shedding their innocence.

There's not a false line or gesture here, in a searing examination of contemporary morality that offers no easy answers and passes no shallow judgements on its damaged characters, instead giving us something akin to real life, albeit in a world that often seems so very far removed from our own. (4) 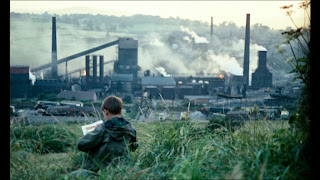 Kes (Ken Loach, 1969) - Ken Loach's second - and still best - feature is this stunning translation of the Barry Hines novel, with David Bradley perfect as malnourished Barnsley school leaver Billy Casper, who escapes the drudgery of pit village life through his friendship with a savage, graceful hawk.

The hawk represents hope, freedom, aspiration and poetry - none of which are allowed to survive in a Britain that kicks the shit out of its working classes, breeding only vicious alpha males peddling mundane brutality and sadistic teachers blinkeredly hurling their young charges onto the scrapheap.

Though it's lit by frequent flashes of wry humour, glorious music and cinematography, and moments of transcendent escape redolent with rare beauty, it's ultimately a chilling depiction of utter hopelessness; one that packs a devastating emotional wallop, tha knows. (4) 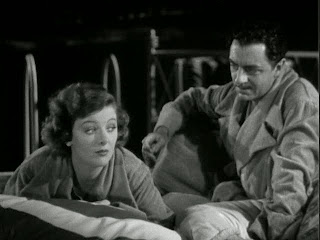 Aside from one broad slapstick set-piece, a dated Chinese valet and Tracy's competent but uninspired performance, everything works. Loy and Powell simply sparkle together - she at her most arch, warm and beautiful, he turning every line into a mellifluous wonder - while Harlow is in unmissable screwball overdrive, displaying what a truly superb comedian she'd become by this time.

Snappily, imaginatively directed by Jack Conway, it's highly quotable, richly romantic and intensely, intensely funny. In fact, it's just about as good as movies get. (4) 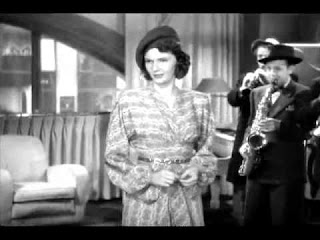 Rhythm on the River (Victor Schertzinger, 1940) - It's lovely to find a gem like this, as sometimes I start to wonder if I've exhausted the '30s and '40s' supply of quality musicals.

Bing Crosby plays a composer who ghost-writes tunes for superficially charming songwriter Basil Rathbone. Due to some fun contrivances, he happens upon Rathbone's secret lyricist - Mary Martin - and the two fall in love. A clever premise, and when you learn that it came from Billy Wilder, that makes perfect sense.

The production is handsome - full of gleaming white sets - there are some fun cameos and in-jokes (like a lovably grouchy Oscar Levant slagging off his own book, and bits for Crosby cohorts John Scott Trotter and Ken Carpenter), while the story is pleasant and quite nicely developed, if cluing in its characters surprisingly early, but where this one really excels is in the music.

The songs by Johnny Burke and James V. Monaco are just brilliant, particularly the moving, timeless Only Forever - sung by Crosby at the piano - and the star clearly knows it, approaching each one with the emotional and artistic commitment it deserves, and investing it with a deep and enduring inner beauty, or a palpable excitement.

Though Bing's jazzy posturing and mannered jive-talk ("Oh make me realise it, Wingston!") during the title track is easy to mock - which is why I've just done it - his vocal and rhythmic, pre-synced drumming is first-rate; Dixieland jazz was the star's overriding musical passion, and it shows.

Martin, who was the lifelong partner of one of my most cherished actresses - Janet Gaynor, vintage gossip fans - also contributes one show-stopping number, a sensational version of Ain't It a Shame About Mame that's flirtatious, funny and quite outrageously enjoyable. (3.5) 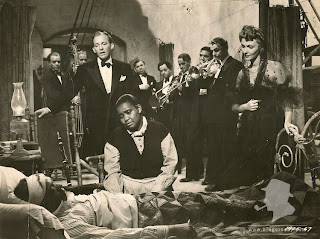 Birth of the Blues (Victor Schertzinger, 1941) - Or Cultural Appropriation: The Movie, as Bing Crosby and Brian Donlevy - who's frankly incompetent at miming the playing of a cornet - get the Dixieland jazz bug from the African-American community, and proceed to take it to the (white) masses.

But whereas the ghastly New Orleans - which cast Billie Holiday as a maid - had a certain inherent nastiness about it, and could hardly wait to get to a posh hall where white folks could play jazz to other white folks, here the treatment is more respectful, if still hamstrung by Hollywood cliché and racist censorship, paying tribute to real-life musicians of both colours at its close, which is a nice touch. (For his part, it's worth mentioning that Crosby himself saw racial divisions as ridiculous, performing with black musicians as readily as white: for him it was just never an issue.)

The (fictional) story is unfortunately an unmitigated shambles, taking in a tedious love triangle (hello Mary Martin), incorporating an allegedly cute kid, and having the band terrorised by a gangster, played by the chameleonic J. Carrol Naish.

Where it scores, though, is in that score. The music here is just great, from hot jazz numbers to ballads, including an irresistible version of Melancholy Baby which an overly literal Bing sings to a sleepy child. There's also the immortal St James Infirmary, The Waiter and the Porter and the Upstairs Maid - a tuneful, jaunty effort about poor people having the most fun, featuring the mellifluous tones of Jack Teagarden - and Ruby Elzy's glorious St Louis Blues (provoked by one of the most arbitrary plot developments of all time), the camera rudely wandering away from the African-American vocalist, before deciding that, yes, that's actually amazing and we should go and listen to it.

As a historical piece about the birth of the blues, it's blinkered and racist and basically just a big fib, and as entertainment it's patchy, but it'd make one hell of a CD, and here you get to see Donlevy actively wishing that he'd been paying attention when they told him how to hold a cornet. (2.5) 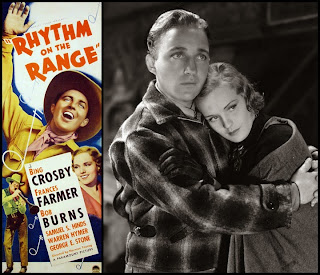 Rhythm on the Range (Norman Taurog, 1936) - This is another of the '30s' endless It Happened One Night rehashes, with society girl Frances Farmer (of Nirvana namecheck notoriety) falling in love with rodeo bum Bing Crosby while riding a boxcar to the West.

It's a solid if familiar story then, there's one stunningly lit shot of a cigarette-shrouded Farmer pulling on a very '30s hat, and Crosby makes the utmost of a thin song score, but the dialogue and characterisation is trite and the frequent comedy interludes are desperately unfunny, making a promising supporting cast look positively idiotic.

At one point, Samuel Hinds says Martha Raye is the most annoying person he's ever met, which seems fair.

As for Farmer, she's a little better than most of these identikit blondes who made 15 or 20 appearances as leading ladies, but undeserving of the cult attention that has attached itself to her as a result of a troubled life, a fraudulent biopic and a superb Cobain lyric. (2)

"Why does he make us feel the questions if he's not gonna give us any answers?"
A Serious Man (Joel Coen, 2009) - The Coens' film about a good man looking for answers as his life falls apart has a superb prologue, two terrific early comic scenes featuring an angry Korean student, and sporadic insights (or non-insights) concerning the meaning of existence. It's also nicely shot by the great Roger Deakins, and accompanied by some nice Jefferson Airplane songs.

But the writer-directors' treatment of the material, for all the originality of its setting - an orthodox Jewish community in the late 1960s - suffers from the age-old Coen problems. Any semblance of sentiment is always just the set up to more nastiness and nihilism, which in this context is frankly baffling, and ultimately both wearing and eye-widening - the cynicism of the ending every bit as unnecessary as the heartless pay-off to their take on True Grit. On one level, I'm intrigued by that approach, but it makes the film dreadfully hard to like. The overall effect is as if Wes Anderson had left the last 10 minutes off The Royal Tenenbaums, and then announced that Royal's illness was real.

On a more prosaic level, it's also quite bitty, but my real problem with A Serious Man is that coldness, that aloofness, the sense that it's laughing at its protagonist, as his world is tipped unceremoniously and brutally upon its head. It's a sad, cynical film, one allergic to genuine catharsis. 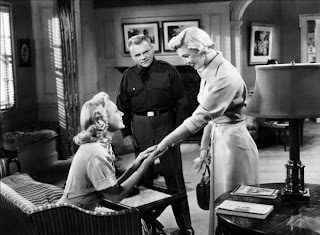 Cagney's a wisecracking former Broadway big-shot - working his way to the bottom of the ladder, betting on horses all the way - who gets a shot at redemption, in the shape of a revue at the army's West Point College. His covert mission, should he be blackmailed into accepting it, is also to put stars in the eyes of silver-tonsiled soldier Gordon MacRae.

It's a clumsy melange of star vehicle, cartoonish '50s comedy, sentimental drama and puff piece for the military, which reaches a particular nadir with a fascistic salute to the titular college - and the nation's armed forces - that would have made Leni Riefenstahl blush.

Doris Day and hoofer Gene Nelson both have their moments - the former bouncing around like a Duracell Bunny on benzedrine, the latter doing a neat routine with canes and hats - and it's fun to see Cagney sparring with his White Heat and Love Me or Leave Me leading ladies: Virginia Mayo and Day.

But the star seems all at sea with the spotty material, going too big too often, and as a film in itself, it's not nearly as great as it should have been, or as it promises to be in that opening reel.

See also: Lady Killer works in spots, while Del Ruth's Blessed Event - with Lee Tracy in the role originally intended for Cagney - might just be my favourite comedy film of all time. 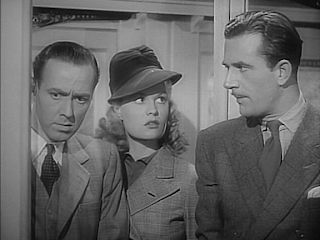 It starts promisingly, and there are some ingenious touches and nice lines alongside a fair portion of convolution and silliness, but it all begins to drag a long while before its hour is up, with the (alleged) comic support from Arthur Macrae proving particularly irritating.

The first of the series remains by far the best: The Saint in New York, with a white-suited Louis Hayward playing Templar as a seductive vigilante killer. (2) 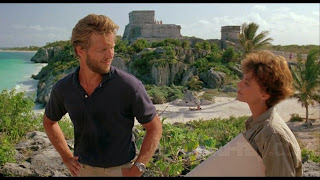 Against All Odds (Taylor Hackford, 1984) - The greatest film noir ever made becomes surely the worst neo-noir, in this staggeringly awful reworking of Out of the Past, with Jeff Bridges in the Mitchum role - reimagined as a beardy, leaden-witted American Football player.

The cast includes James Woods, Richard Widmark and Jane Greer - who played the femme fatale in the exalted original - but almost none of it works, due to the hideous '80s stylistics and one of the most abysmal scripts ever brought to the American screen.

In mild mitigation, Woods does his best, there's one neat (though completely incongruous) car chase and the theme song by Phil Collins is actually quite good, though I prefer the Mariah Carey version. Shut up. (1)