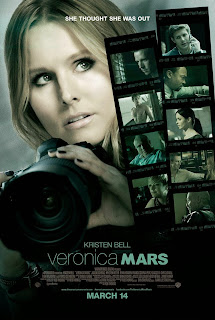 *NO REAL SPOILERS, BUT IF YOU'RE A FAN, BEST TO GO IN BLIND*

The ballsy, whipsmart heroine of this iconic '00s teen noir series finally returns, thanks to the determination of creator Rob Thomas, and the cheque books of some 91,000 fans (me included).

For the uninitiated, Veronica Mars was one of the defining shows of the last decade, and certainly my favourite, creating a Hammett-style hero who just happened to be a teenage girl, and mixing equal parts mystery, high school drama and absurdly sharp comic writing. If you're wondering why some of us continue to root for that blonde girl with the distinctive schnozzola as she endures yet another dodgy romcom (including the other school reunion flick with Jamie Lee Curtis, the bowels of hell's You Again), then this is your answer - she's Kristen Bell, and she's cool as flip.

The show lasted just two spellbinding seasons in its true form before its poor ratings caught up with it. The third was a botch job that provided many memorable moments but smelt of compromise. The pilot for a divergent fourth was never picked up. There was talk of a novel or a comic book, before all went quiet. Then one day a Kickstarter page appeared...

The film picks up nine years after Season 3, with law graduate Veronica tempted out of retirement when her ex-boyfriend Logan (Jason Dohring, flexing that sad smile once more) is suspected of murdering his pop star girlfriend. He thinks an obsessive fan might be responsible, but her alibi isn't letting in much air.

Thomas, who directed as well as co-scripting with Diane Ruggiero, struggles to find his footing a little for the first half hour: his script inevitably exposition-heavy and overly compacted, needing stakes high enough to justify Warner Bros' backing, but having just 100 minutes to tell its tale.

But as it unfolds, toying with stock series tropes, dropping loving in-jokes and breathing life back into its strong, combustible human relationships, you see that it's doing everything right by its characters, right the way through to a simply stunning pay-off. The best evidence I can give? Boring old Piz is now likeable: a wry, smart and self-aware young man, rather than an interloping wet blanket with bad hair. Certainly the packed screening I was in seemed to go for the film completely, from the playful theme songs at the kick-off to the real thing over the end credits.

The performances are just a treat, Bell effortlessly recapturing Veronica's inimitable combo of bad-assery and off-kilter sentiment, Dohring slipping back into Logan's pec-boobs and sardonic asides (but where's his cool necklace?) and Rico Colantino giving the whole enterprise that lovely Keith Martian warmth. The clear affection that these actors have for their creations, abandoned seven years ago, extends right across the cast, to Mac (ace hair), Wallace (love that file gag) and Weevil, whose journey to respectability mirrors Veronica's own. Dick Casablancas is basically now just comic relief writ large, and who could object?

There are some things that maybe don't work (James Franco's cameo is funny but utterly incongruous) and others that certainly don't, including a mundane supporting performance from Martin Starr (one of *four* Freaks & Geeks alumni, including Percy Daggs III), and a smattering of clunky lines that would doubtless have been ironed out with a longer shooting schedule. Truth be told, the mystery itself is only middling, squashed into this shorter format instead of playing out over 22 shows.

The things that matter, though, it gets right: Veronica coming to terms with her past and herself - negotiating the ties that fray but never break, and facing the part of her personality that has lain dormant for seven years. Increasingly, those choices are presented in the most invigorating, viscerally exciting way, with Thomas all over his show's singular mythology in a way that should satiate even the most hard to please fans.

Is it objectively a very good film? How can I be objective? She's back. (3)

See also: Dohring also went to a school reunion - and tried to solve a mystery - whilst Scouting for Sonny. I'm sure I've reviewed it somewhere. Link to follow. Brief reviews of Veronica Mars Seasons 1 to 3 are via that link just there.
Posted by Rick Burin at 12:42