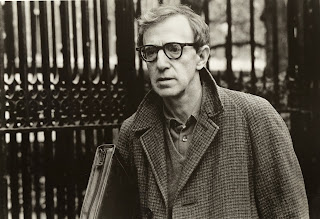 Last year was, for anyone who's been living under a rock, the year of ClintFest '13, the mammoth cultural event in which I watched some Clint Eastwood films. This year it's Woody Allen's turn, as I rewatch a heap of his movies, because they make me happy, and also sad, in a good way. And occasionally sad in a bad way (Cassandra's Dream). I started with Radio Days and Bullets Over Broadway. Here are some others. Strap in. Or don't. It'll be fine either way, it's just some reviews. 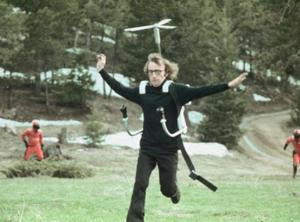 Sleeper (1973) - Woody's "early, funny films" just aren't as good, or as funny, as his later ones. This tribute to silent comedians like Buster Keaton, Charlie Chaplin, Harry Langdon and Harpo Marx (the latter a mute comic in sound films) is perhaps the weakest of the bunch.

Allen plays the manager of a health food store, who goes into hospital for routine surgery and wakes up 200 years later to find he's a fugitive in a totalitarian state. Good premise, bad execution.

There are a handful of clever sight gags (the wheelchair, flying device, orb, banana peel and Orgasmatron) and a few decent lines, but it's very shrill, Allen has no discernible gift for "thrill comedy" and the film is far more miss than hit - either too broad or too weirdly specific to the director's own life - to the extent that it's often just plain irritating. It's also ugly in its cheap rendering of a future universe, and half the time Allen seems to have no idea where to put his camera, whilst mugging ferociously in front of it.

Its biggest shortcomings remain in the writing, though, the whole film suffering from a damaging lack of story and a quite critical lack of heart.

"And I say that with all due respect", as Woody says at some point during almost all his films. (2) 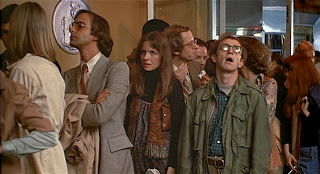 "I have to go now, Duane, because I'm due back on the planet Earth."
Annie Hall (1977) - Woody's freeform dissection of a relationship (and its environs) remains his most popular and critically acclaimed movie, and is also the bridge between his "early, funny films" and his later, better, funnier ones.

You know the score: Alvy Singer (Woody) has a dead shark on his hands, a lobster behind the fridge, and two huge spiders in his on-off girlfriend Annie Hall's (Diane Keaton) bathroom. She "grew up in a Norman Rockwell painting", can't have sex without smoking weed, and resents the possibility that he doesn't think she's clever; but damn it if they're not good together.

On umpteenth viewing, I both like it more than ever and am more convinced that it isn't in the absolute top tier of Allen movies, the ones that completely exalt or destroy me - Hannah and Her Sisters, Purple Rose, Manhattan, et al - where Woody's unalloyed genius is marshalled by a rigorous comic and dramatic discipline (I'm sounding like the guy in the cinema queue). Here, the non-linear narrative is sometimes invigoratingly playful but also a touch uncertain, and the final 20 minutes falls away a little, flailing during its LA scenes, where he's more concerned with aiming barbs at the West Coast than telling his story.

The film as a whole, though, is both touching and intensely, awesomely funny, with Woody's astonishing, misanthropic comic imagination in overdrive, barely a minute passing without some all-time classic one-liner or sight gag. He's a hostage, he'd like to hit that guy on a gut level, they can walk to the kerb, and now he's playing accidental dodgems. Both he and Keaton are just wonderful in this; she was never better, and he never more accessible and direct - delivering monologues and conspiratorial asides direct to camera.

There's wisdom to spare, too, amidst the gags. Everything you ever needed to know about relationships is contained in the lobster scene and its reprise.

And to think it started life as a murder mystery.

"I pour all my energy into my inventions. Because of my problem in bed with her, I can now fly."
A Midsummer Night's Sex Comedy (1982) - Bucolic beauty meets Allen's usual preoccupations as he reimagines Bergman's Smiles of a Summer Night, complete with neat nods to the original, bits of Old Woody (the slapstick) and New Woody (the sexual strife), and some dodderingly loveable old professors right out of Hawks' Ball of Fire.

The film's theme is simpler and more slender than its predecessor's - opportunity seized or lost, never to return - but dealt with in the nimblest, most poetic manner, the film recovering from a slightly slow start to emerge as yet another Allen classic, and among his most underrated works: in the words of Jerome Kern, lovely to look at, delightful to know.

Each member of the ensemble gets the chance to shine, though it's Farrow who leaves the greatest impression (and was somehow nominated for a Razzie). She's at her most radiant in the first of her collaborations with the director, at one with the pastoral setting, the sun streaming through her long blonde curls. Shut up, you fancy her. Weirdo. (3.5) 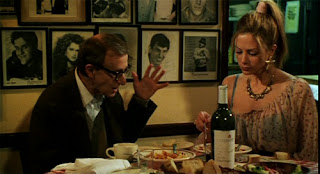 "I don't even want to be a hairdresser - if Clint Eastwood wants to be a hairdresser, just let him."
Mighty Aphrodite (1995) - A lovely Woody comedy, as a New York sportswriter with an uncertain marriage (Allen) tries to remodel the life of his adopted son's mother (Mira Sorvino), after she turns out to be a prostitute.

The film's Greek Chorus gimmick only partially works and the subplot featuring Helena Bonham Carter as Woody's wife is poor, but Sorvino is absolutely exceptional as another of the director's ditsy, high-pitched, very human heroines, and the scenes between her and Allen are simply superb.

While the film flounders a little at the finish, ending with a somewhat unsatisfying wrap-up, its centre is quite formidably entertaining, not to mention warm, witty and wise. (3) 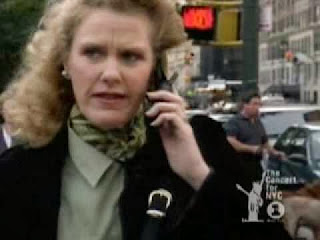 SHORT: Sounds from a Town I Love (2001) - As you can see, I'm on an Allen binge at the moment, and that's also meant picking up a few of the things I've missed. I've ordered his 1994 TV movie, Don't Drink the Water, watched him being surprisingly affable on Parky, and found this short on YouTube.

It's a three-minute film made at short notice for the Concert for New York City, the post-9/11 fundraiser, in which some of Allen's old favourites and a few new faces walk around the city, delivering one-liners into their phones.

There are two or three good jokes, but Woody was in a creative slump at this point, and had only a few days to put the film together, rather than the usual year.

Quibbling seems the wrong response, as it's probably more important that he contributed something, than that the something was a great work of art, but in truth his note to the audience, read by John Cusack, and the pay off to the movie - a title card saying "I love this town" - are more effective than the short itself. (2)

You can watch it here: www.youtube.com/watch?v=okiXor25d8o

"I can't believe I'm in love with a smoker."
Anything Else (2003) - It isn't a very competitive field, but this is still Woody's best film of the noughties. If you haven't heard of it, that might be because it went direct-to-video in Britain, where many of Allen's most fervent yet apparently stingy admirers ply their trade. (So did Scoop, incidentally, which is also conspicuously missing from most critics' discussion of Allen's work.)

It's essentially an Annie Hall update, featuring Allen's youngest ever leads, Jason Biggs (25) and Christina Ricci (23), and with the director providing many of the lolz in support as Biggs' psychotic mentor. While it's overly familiar and sometimes skirts around its targets, where once he would have hit them bang on, it's also funny, unlaboured and has a brilliant performance from Ricci.

Many actresses have played this character - a sexy, difficult and capricious lust interest - from Diane Keaton to Ellen Page, but Ricci's braless incarnation, consumed by passion for everyone except the man she "loves" is just about definitive. Biggs is also good as the surrogate Woody, Danny DeVito has a few fun moments as his agent, who sees everything in terms of a metaphor about suits, and takes rejection very badly, and there's some unexpected cringe comedy to go with the usual one-liners.

In terms of music, Woody's once more trading on classic jazz, with three glorious Billie Holiday tunes (Easy to Love, Easy Living and The Way You Look Tonight) and a complementary score, all of which is nice but used too repetitively. Diana Krall also turns up to sing in a nightclub, and Stockard Channing has a number, which is extremely well done, though her character is tedious and poorly-drawn. Visually, it's one of Woody's widest: shot in 2.35:1, which isn't used as imaginatively as in his two others, Manhattan and Blue Jasmine.

Like Biggs' character, Anything Else has valleys to go with its peaks, and could have done with some tightening or re-writing here and there, but it's Allen's best film between his last masterpiece, Sweet and Lowdown, and 2011's Midnight in Paris, largely because it doesn't make me want to protect him from himself. And the scene in which Ricci seduces Biggs in an old record store is probably the sexiest thing he's ever written (except for making Mia Farrow a psychiatrist in Zelig). (3)

Thanks for reading.
Posted by Rick Burin at 14:48