A Field in England, Woody Allen, and my letter to Ndugu - Reviews #168

Plus: one of the best I've seen this year. 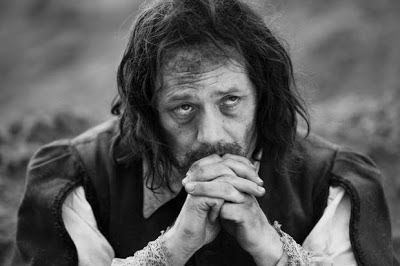 "You are confused, sir - it is I who am capturing you."

A strange, misty, monochrome film, heavy with hallucinations and bizarre twists, in which four Civil War deserters have an encounter with an Irish occultist, who turns the bucolic idyll of the title into a bloodbath - much as the conflict was doing all over the country.

This uncategorisable movie is instinctively directed, full of brilliant dialogue courtesy of Amy Jump ("He's not only kept you a stranger to the world, but to yourself, it seems"), and has three great performances: from Reece Shearsmith as an effete coward of an astrologer, Richard Glover as his idiotic friend - who has never looked upwards - and Michael Smiley playing their formidable adversary, with his Geoffrey Rush nose and penchant for shovel-based violence. But for all its strengths, including dizzying, mushroom-powered montages, a crisply atmospheric visual sense that seems to borrow from Humphrey Jennings, Michael Powell and Michael Reeves, and an abundance of dry wit, it's infuriatingly flawed. As Smiley's right-hand man, Ryan Pope seems to really struggle with the immaculately rendered inflections and nuances of the dialogue, the film's lack of story or purpose means it begins to bore before the end, and it all adds up to... what?

I liked it, and enjoyed the pervading sense that this was not only an event movie, but one prepared to break all the rules. But whether it attempted to do so while dressed partly in the Emperor's New Clothes is another question. (3) 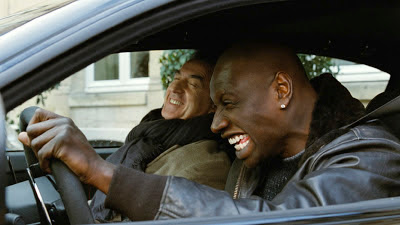 The Intouchables (Olivier Nakache and Eric Toledano, 2011) - Ladies and gentleman, I think we have a new comfort movie. And what a beautiful film it is: one of the funniest I've ever seen, and among the sweetest too. Omar Sy is an uneducated Senegalese immigrant from the Projects who applies to become a full-time carer to unhappy, wealthy quadriplegic Francois Cluzet, so he can complete his benefit form. Instead, he gets the job. Cluzet doesn't care about his background, he wants a man without pity, and he gets one - Sy's contempt for modern art, hilarity at high culture, and exuberant dancing to Earth, Wind & Fire are a bonus. It's formulaic, perhaps, and concludes in a conventional (though perfect) way, but it's beautifully performed, hysterically funny - special mention for the opera sequence, the hardest I've laughed at a movie since Team America's vomit geyser - and navigates the pitfalls of this type of film with laughable ease. It's deft without being disposable, affecting without being mawkish, and takes on big issues (death, disability, poverty), without losing its sense of humour. Put simply, it's a classic. *strokes ears* (4) 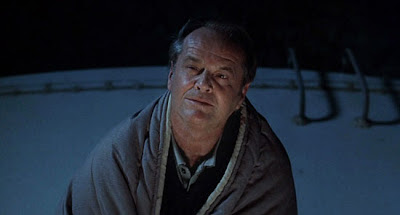 How are you? I'm fine. Today I watched the film About Schmidt. I enjoyed it. At times I feared it was just a less inspired take on The Straight Story, with a score that went too jaunty too often, and a tendency to undercut its many truthful moments with smug comedy. But then the ending came along, one of the greatest endings I've ever seen, a heartbreaking voiceover followed by a heart-mending pay-off, and I realised that I'd seen something truly extraordinary, a film whose flaws are a small price to pay for a majestic, life-affirming whole. And then there was Nicholson's performance. It's so long since he bothered to act - I suppose One Flew Over must have been the last time - that I was willing him to succeed. And, yes, there were ticks and twitches there, and at times he hadn't quite submerged arrogant, shark-faced Jaaack within self-hating, sad-faced Warren (me), but in the end it was a triumph, just like the movie. Along with the usual cheque, I'm enclosing a little something extra to spend as you please. 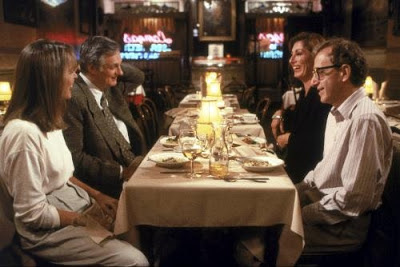 Manhattan Murder Mystery (Woody Allen, 1993) - "Is that what you do when I forbid you?" Woody at his most playful: a largely effortless mystery-comedy in the Thin Man vein, with nervy book publisher (Allen) dragged into an amateur murder investigation by his bored wife (Diana Keaton) when their neighbour turns up dead. Also along for the ride are amorous Alan Alda - who still has his eye on Keaton - and saucy poker sharp Anjelica Huston, one of Allen's authors. Laid-back, charming and suspenseful in the old-fashioned way - with lots of scenes of people searching in places they shouldn't, and a finale that pays homage to The Lady from Shanghai - it comes with hundreds of those little gags Woody used to manufacture at will, along with plenty of wisdom amongst his wisecracks. For a little while in the second half the film becomes so high-pitched and frenetic that it risks being annoying, and that "father figure" line still seems a bit iffy given the events of the previous year, but for the most part it's a joy: a little gem from that period when Woody was still firing on most, if not all cylinders. The pay-off is just glorious. (3)
Posted by Rick Burin at 20:46