The excellent British filmmaker Michael Winterbottom came to give a talk at St Anne's College in Oxford yesterday. I didn't make notes, as I didn't have my journalism hat on, but I do have a memory. Here are 10 things I learned: 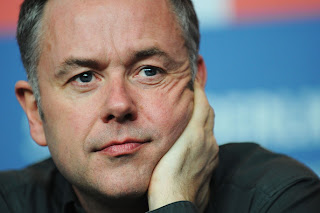 1. A recurrent theme of his films is people in exile. This, more than any other themes or stylistic preoccupations, is a thread running through his work.

2. He favours a "cinema verite" visual style largely because it makes it easier to cut together various takes. Often he'll film actors talking to one another for 20 minutes, then chop the best bits together during editing. He doesn't watch rushes.

3. He doesn't have any favourite directors, as there are so many diverse and random elements in the filmmaking process that he thinks it's a nonsensical concept. He does enjoy many of Steven Soderbergh and Gaspar Noe's movies.

4. If he could have made any film of the past few years, it would be City of God.

5. His favourite experiences have been making In This World and working with Coogan, particularly on 24 Hour Party People, where he vicariously enjoyed that Factory Records feeling. His most stressful and least enjoyable project was The Shot Doctrine, as he spent six months compiling archive footage, before being told that wasn't what was wanted.

6. The graphic 9 Songs was partly a response to the endless conversations on the set of Code 46 about what precisely could be shown during the sex scenes. He says he has an inclination to "annoy", rather than provoke, but doesn't understand why anyone would be resistant to the idea of seeing people "making love" on screen.

7. He abhors a film with a "journey of discovery", because life isn't like that.

8. The idea behind Genova was wanting to explore the relationship between a father and his daughters. They kept coming up with different endings, but never found one they liked.

9. Jude, his film based on Thomas Hardy's Jude the Obscure, finishes sometime before the end of the source material, because the 500-word book is so densely plotted that shooting it all as a two-hour film would have made it "absurdly melodramatic".

10. He will never cast a non-professional actor and then ask them to act. The idea should be that they are able to bring an insight to a character that a professional never could, but this can only happen if the character is close to their real-life experiences. Casting a mixture of big-name stars and non-professional actors creates an atmosphere that is conducive to great performances.
Posted by Rick Burin at 12:46