Hello there. Here's a quick review of a book about one of my favourite subjects: the 100m final of the 1988 Seoul Olympics. 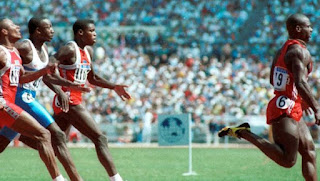 The Dirtiest Race in History (Richard Moore, 2012) – On September 25, 1988, Canadian sprinter Ben Johnson won the 100m at the Olympic Games in Seoul, smashing his own world record and humiliating his arch rival, the American Carl Lewis, in the process. The gold medal meant more than the record, he said, “because no–one can take that away from you”. Two days later he was being bundled out of the country in disgrace, having been stripped of his title and his time, after testing positive for the anabolic steroid stanazolol. When I was eight, I asked my dad who the best sprinter was that he had ever seen. “I suppose Ben Johnson,” he shrugged. “Because he was the fastest.” I raided the local library, looking for anything about Johnson, and emerging with a second-hand biography that pre-dated the Olympics – I fairly revelled in its eeriness, and Johnson’s denial of drug use accompanied by a picture of him with bulging muscles and yellow, watery eyes – and a review of the year in athletics, published in early 1988, that waxed lyrical about his recent World Championship win. The story has fascinated me ever since.

Moore’s account, which due to the author's background in journalism often reads like an extended newspaper feature rather than a history book, is well-researched and very well-written, exhibiting a strong turn of phrase and a good grasp of how the story should be paced. We get the back story on Johnson, Lewis and their rivalry, fine sketches of the supporting cast (you can’t help but feel for Calvin Smith, who regards himself as the moral winner of the ’88 final) and a sure-footed, extremely insightful look at the history of drugs in athletics, showing just how prevalent they were – and how they worked; something of an eye-opener for me. While Johnson remains unable to take responsibility for his actions, Moore suggests that – though guilty – he was a scapegoat, and there was something deeply fishy about his failed test. Steroids take around 11 days to clear the system. Johnson had taken his last dose 26 days before the final. Only the pages dealing with the days leading up to the race seem oddly rushed.

Moore has spoken to most of the key players in this story, though he has only a fleeting meeting with Lewis, and is hamstrung by the fact that Charlie Francis – Johnson’s brilliant, controversial coach – died in 2010: we get a lot of quotes from his self-justifying memoir, but theres no chance to challenge what he says or divert him from a carefully constructed line of defence. Still, it’s a gripping read: if not a genuinely great sports book, then not far off. It's full of superb quotes (future anti-doping chief Dick Pound’s recollections of representing Johnson are unforgettable – when you get to the “repressed renal function”, not usually the stuff of poetry, it makes the hairs on your neck stand up), memorable characters flung around by history, and intriguing subplots – not least the appearance of a “mystery man” at Johnson’s positive test. (3.5)

See also: BBC4 ran a documentary about the same story in July.
Posted by Rick Burin at 22:14