Smoking, fireworks and Doug on the ceiling - Reviews #126

Douglas Fairbanks, an ant crossed with a man, and John Barrymore at his greatest, in the third and final part of my summer reviews round-up. To start with, here are the first three films I've watched from the Douglas Fairbanks - A Modern Musketeer box-set, which collects 11 of the star's early movies. 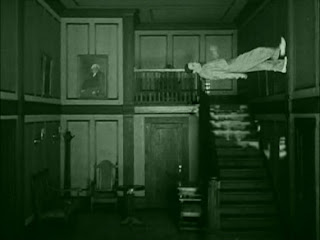 *MINOR SPOILERS*
When the Clouds Roll By (Victor Fleming, 1919) – Before Douglas Fairbanks was a swashbuckler – a transformation that took place with The Mark of Zorro – he was America’s favourite everyman, starring in a series of exuberant romantic comedies that showed off his never-say-die persona, physical prowess and great big smile, and made him one of the most bankable stars on the planet. When the Clouds Roll By is regarded by fans as his best contemporary comedy. It’s the first I’ve seen, but it’s an absolute gem, with passages of dazzling cinematic invention – several of which seem to have influenced Buster Keaton – along with knockout stuntwork and an atmosphere of artistry that extends to intertitle cards decorated with sumptuous paintings, all serving a slightly dubious story that takes itself a little more seriously than it should. Doug plays an Average Joe whose life is manipulative by the psychotic psychiatrist across the hall. Our hero falls in love and gets his dream job, only for the doc’s underlings to sabotage both ventures. Thank goodness, then, that Doug is so good at climbing things and swinging from ropes. The film begins with a bizarre, outlandish succession of gags in which foodstuffs (played by men) leap about inside Fairbanks' stomach, followed by a sublime dream sequence where he's chased by vegetables (a nightmare I also had as a kid), hurdles various outsized obstacles and then walks on the ceiling – 32 years before Fred Astaire was hailed for doing the same. And that isn't the only trendsetting here: the moment where he leaps through the paper wall of a ballroom and into a lake must surely have inspired Buster’s “shifting sets” set-piece in Sherlock, Jr., while a version of the “shadowing” sequence ended up in the same film. A joke with a thrown horseshoe turned up in The Goat, and the waterlogged finale was essentially recycled for Steamboat Bill, Jr. While the story is a little too stressy and serious to make this the pure escapism it really ought to be, it’s still a wonderful film, especially if you’re a sucker for a stunt or a sight gag. You’ll never never swing from a door/leap onto a horse/pretend to be 10ft tall the same way again. (3.5) 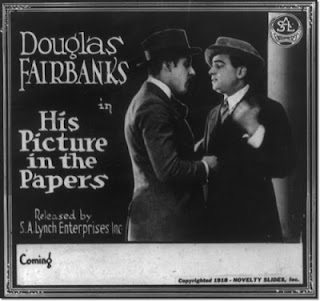 *MINOR SPOILERS*
His Picture in the Papers (John Emerson, 1916) – Doug’s first collaboration with director Emerson and legendary screenwriter Anita Loos is a delightful comedy that loves alliteration, hates vegetarianism and features some classic stuntwork, like Doug leaping onto a moving car wearing only a dressing gown. He plays Pete Prindle, the ne’er-do-well son of a vegetable supplement magnate, who finds that the only way he can impress his father, and win the girl he loves, is to get his face in the paper. Cue the gleefully scheming, secret meat-eater running his car off a cliff, becoming a prizefighter and wading out of the sea to lamp two cops. It takes a good 15 minutes to hit its stride, and climaxes with a conventional punch-up, while Pete is sadly talked out of a two-storey leap of faith armed only with an umbrella – something we all want to see – but this is fast, funny and furious fun, and includes a near-mythic sequence in which the hero can’t be bothered to climb the stairs to share some good news with his fiancée, and so clambers up the side of a building instead. (3.5) 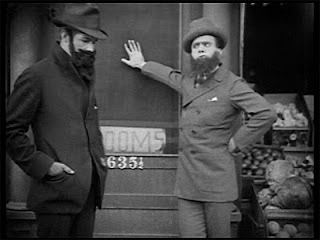 Flirting with Fate (Christy Cabanne, 1916) - Lacklustre, unfunny black comedy - in which Douglas Fairbanks's artist, down on his luck, hires a hitman to kill him, then changes his mind - that's slightly redemmed by one very nifty action sequence, in which the star manages to escape his pursuer by leaping up onto the roof of a house. The rest is mostly static, set-bound comedy in which he smells a lot of gas lamps. The film's basic story formed the basis of two far superior films: The Whistler and Bulworth. (2) 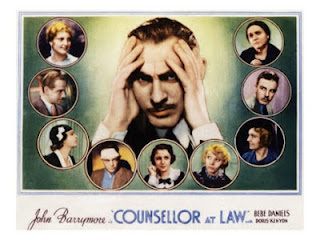 Counsellor at Law (William Wyler, 1932) – A scintillating Pre-Code drama, built around John Barrymore’s tour-de-force, brilliantly cast against type as a workaholic, teetotal Jewish lawyer who’s fought his way up from the gutter and may well be returning there, after a scandal breaks. Wyler’s ever-moving camera helps prevent Edgar Rice’s play from seeming too stage-bound, though the serio-comic attempts to immerse us in office life – while successful – do sometimes distract from the startling and compelling story at the film's centre. The stellar supporting cast includes Bebe Daniels, John Qualen (as a reformed stick-up man) and Melvyn Douglas (playing a detestable gigolo), but Barrymore blows them all away in perhaps his greatest dramatic characterisation: his entire body contorting as his legal titan shifts from professionalism through childlike glee to utter despair, the star’s performance blissfully free of the tics that marred his later work, every movement and gesture the measure of economy. His showdown with a Communist firebrand is one of the great set-pieces of early ‘30s cinema. (3.5) 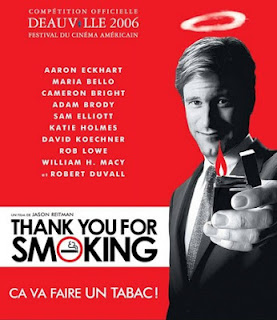 Thank You for Smoking (Jason Reitman, 2005) – Strident satire about a tobacco industry spokesman (Aaron Eckhart), who reforms for the benefit of his impressionable son, but perhaps not in the way you were expecting. Like all of Reitman’s films, it’s invigoratingly entertaining, but there’s also plenty going on under the surface, the director skilfully spearing accepted wisdom as he removes his tongue from his cheek long enough to suggest that while free speech has its drawbacks, it’s worth defending all the same. This pungent portrait of the world of spin, with its clear-sighted and original viewpoint, is arguably his best film so far – it’s a toss up with Young Adult – with only the cartoonish scenes about Hollywood product placement and a subplot featuring Katie Holmes' journalist coming across as forced. (3.5)

*MINOR SPOILERS*
Tucker and Dale vs Evil (Eli Craig, 2010) - An excellent comedy-horror that ingeniously inverts genre stereotypes, as two pleasant, blameless hillbillies are mistaken for backwoods psychopaths by a bunch of college kids, who in the ensuing panic start accidentally killing themselves. It's a great idea that's expertly developed, with numerous cleverly-constructed gags - particularly Tucker's first meeting with the beautiful people and Dale's chainsaw dash - and some ace one-liners ("I should have known if a guy like me talked to a girl like you, somebody would end up dead"), though the wrap-up exposes the filmmaker's inexperience, with a pointless twist tied to the film's weak backstory, and a boring action climax. For the most part it's a killer spoof, though; one of those rare one-joke comedies that really works. (3.5) 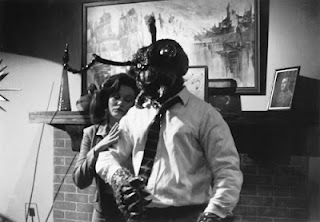 Matinee (Joe Dante, 1993) – A larger-than-life schlockmeister (John Goodman), based on William Castle, arrives in a small town to preview his new atomic age monster movie – Mant! (half man, half ant) – against the backdrop of the Cuban Missile Crisis, which is hotting up less than 200 miles away. Dante’s film is a hymn to '50s and '60s horror films, but more significantly an ode to childhood; what he’s really interested in is how these seismic events affect a bunch of likeable teenagers, including a boy on the cusp of adulthood (Simon Fenton), whose father is just off Cuba on a Navy boat. Occasionally the plot machinations feel a touch strained, but the film is very sweet-natured, both Goodman and Cathy Moriarty – as the filmmaker's sardonic girlfriend – are wonderful, and Mant! itself is hysterically funny; maybe the finest, most acutely-observed film-within-a-film that I’ve ever seen, and with a killer trailer too. (3) 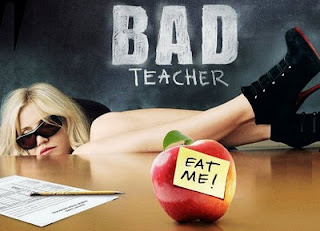 Bad Teacher (Jake Kasdan, 2011) - Spectacularly disinterested educator Cameron Diaz locks horns with aggressive goody two shoes Lucy Punch - her rival for the affections of watch fortune heir Justin Timberlake - while scheming to get the money for the boob job she thinks she needs to land a wealthy man. This one got bad write-ups, but comedy's a very subjective thing and, while it's not overly sophisticated, I laughed pretty much all the way through. At its centre is the only good performance I've ever seen from Diaz - with one of cinema's most notoriously poor comedians suddenly becoming funny - and there are a steady stream of surprising jokes and amusing supporting performances that compensate for a few duff scenes (the predictable car wash sequence) and a plot that comes apart towards the end, starting with the moment Timberlake does something completely out-of-character. Jason Segel is particularly good as Diaz's other love interest, in an old-fashioned, almost Fred MacMurray-ish performance. Well, if MacMurray had ever said: "Give me your panties". (3) 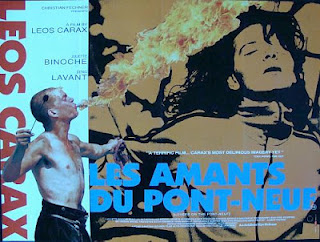 Les amants du Pont-Neuf (Leos Carax, 1991) aka Lovers on the Bridge – A pair of homeless lost souls – he a fire-eating drug addict, she a lovelorn painter who is going blind – fall in love whilst camping out on Paris’s oldest bridge, closed for renovation. That promising premise, which might have made for a sweet little film, gets somewhat lost in this long, portentous and frustratingly aloof melodrama. The movie is armed with a striking visual sense that leads to moments of absolute magic – particularly the fireworks sequence, which erupts with sozzled joy – but lacks insight into its characters, meaning that it ultimately gets a little boring. (2.5) 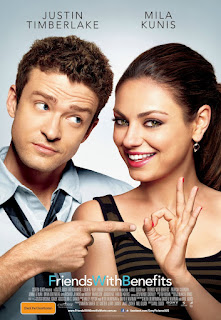 Friends with Benefits (Will Gluck, 2011) - Art designer Justin Timberlake and big-eyed head-hunter Mila Kunis are mates who decide to start boffing. (That’s why they’re doing that thing on the poster.) It either isn't explained why they aren't dating, or I didn't understand it, but if you don’t know how this one’s going to turn out, you should go to the movies more. The first half of the film has the attention span of a gnat, making it fun to watch but completely dispensable; the second oscillates between more of the same, and trying to deal with some weightier themes – like self-destruction, and dementia. Beneath the barrage of up-to-the-minute technology references, it doesn’t add up to a whole lot, and the subplots incorporating Woody Harrelson and Patricia Clarkson are frankly useless, but Timberlake is OK, Richard Jenkins has an effective bit as his ailing dad, and it’s a fairly easy watch. I’m not sure Kunis is going to have a stellar dramatic career when her looks fade. (2) 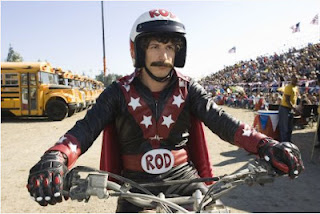 Hot Rod (Akiva Schaffer, 2007) – The Lonely Island movie features Andy Samberg (in a role originally intended for Will Ferrell) as a rubbish, self-proclaimed stuntman trying to raise the money for his stepdad’s life-saving operation – so he can finally kick his ass. Lots of it doesn’t work; most of it, in fact, with a central story that provides very little comic capital, and jokes that either fall flat, go on too long, or fall flat and then go on too long (“Cool beans”). But there is the odd funny line or nice comic touch (Bill Hader, high on acid, pointing at a bin and enquring, “Hospital?”), one sequence that's very funny (“I’m Rod, and I like to party”) and another that is genuinely, laugh-long-and-hard-out-loud hilarious, in which oriental dance fiend Richardson attempts to help hand out some fliers. Danny McBride is also marginally more bearable than usual. (2)
Posted by Rick Burin at 20:10