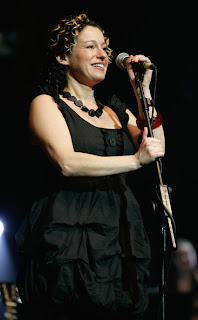 Surrounded by Christmas trees, fairy lights and a gaggle of cheery musicians, the “Barnsley Nightingale” brought an early festive treat to Harrogate.

“It’s very good to be in Yorkshire,” announces Penistone-born Kate Rusby as she strolls on stage at the Royal Hall, dressed all in black, save for a white necklace and bangle.

The county’s the only place on earth you can get a good cup of tea, she says.

For the next two hours she dazzles a three quarters-full hall with a catalogue of carols and a smattering of songs from her new album, Make the Light.

And while her vocals are plaintive and pure, her personality is playful - and as big as the Royal Hall.

She regales the audience with stories about her daughter and her dog, recalls some peculiar complaints about her performances - “Someone was very offended that I was singing songs about Jesus,” she recalls, while a BBC viewer balked at the sight of her knees - and accuses her multi-instrumentalist husband of being a cross-dresser.

Many of her festive tunes are drawn from the tradition of pub sing-alongs in South Yorkshire and Derbyshire pubs. While some were “thrown out by the Victorians for being too raucous”, there’s room for more reflective fare delivered in Rusby’s inimitable fashion: eyes closed, head cocked to one side, hands clutching the mic stand, her voice as crisp and clear as fresh snow.

The highlights include Here We Come A-Wassailing - even more joyous and knockabout than on the 2008 Christmas record from which eight of the songs are taken - The Holly and the Ivy, slowed down in a manner that makes it sound utterly new, and The Mocking Bird, a glorious cut from Make the Light that’s at once powerful and delicate, the soaring vocal sparsely backed by guitar and bass.

Even the decision to let husband and collaborator Damien O’Kane play the title track from his debut album Summer Hill pays off. Such concessions to a headliner’s partner are usually unwelcome, but O’Kane, from Coleraine, Northern Ireland, has a fascinating voice and Rusby’s harmonising on this lovely song is first-rate.

She rips through Sweet Bells - “an absolute favourite” - and offers a transcendent take on the elliptical Poor Old Horse, before closing with O Little Town of Bethlehem, an effective bit of staging placing the focus on the brass band.

Rusby’s announcement that it would be the last song had drawn groans from the audience. “Well, if you clap loudly, I’ll come back on,” she had added with a wicked grin.

And so she does, quipping: “It just so happens that we do know two more. That’s lucky.”

If Hark, Hark, What News is pleasant if unremarkable, Rusby pulls out all the stops with The Wren, the juxtaposition between her appealing, cheery banter and heart-stopping, often heartbreaking, singing never more pronounced.

Summarising the song’s roots in children’s Christmas tradition - “Look, we’ve got a bird in a box - some treats and money, please” - she recalls her own confusion at the lyrics, “We have cannon and ball to conquer them all”, which as a young girl she took to refer to the ‘80s comedians, then promptly launches into a spellbinding vocal that sends a shiver down the spine.

My dad, who was up in the dress circle, said it brought back memories of seeing Sandy Denny in her prime, which is as high praise as I can think of.